This “Which Ship Do You Support” Meme originally belongs to SemiGothPixarQueen and is dedicated to all of my friends, fellow artists, fans, and brethren who admire Sesshoumaru, Inuyasha, and Ayame as well as both Sesshoumaru x Ayame or SessAya and Inuyasha x Ayame or InuAya.

Two dog yokai warrior brothers. One wolf yokai warrior princess. One interesting love triangle or the classic case of the older brother approving of his younger brother’s romantic life? Whatever situation you and many other Inuyasha devotees make of this can spark a multitude of ideas. Furthermore, whether you support SessAya as a romantic couple or InuAya as a romantic couple, you might be bound to have something interesting arise in either pairing. One attribute remains. At least these two shipping ideas are a whole lot better than what was seen in canon. The mere mentioning and thought of Sesshoumaru being paired with a certain wind sorceress whose misdeeds were inexcusable, Inuyasha being paired with a certain idiot in distress who has inflicted abuse on him while demonstrating moments of one step forward yet ten-thousand steps backward, and Ayame being paired with a certain pathetic excuse of a wolf yokai warrior who was all talk yet barely any action and got away scot-free with murder is not my idea of fun. Therefore, those poor excuse of life partners shall never be mentioned here or there, for Sesshoumaru, Inuyasha, and Ayame should be fortunate to escape from those situations, at least in my AU headcanon.

It should already be common knowledge that I have always preferred Inuyasha x Ayame as the superior romantic couple because of how much unconditional love, compassion, genuineness, and fortitude there is between Inuyasha and Ayame. While this power couple is known for their physical strength, impeccable combat prowess, and peerless perseverance, the one attribute that has brought them together is unconditional love grounded in compassion, understanding, and acknowledging each others’ good sides, bad sides, and ugly sides. Therefore, if it was not already clear, Inuyasha and Ayame as a greatly romantic couple is made of purely unadulterated win.

In Sesshoumaru’s and Ayame’s case as a romantic couple, I still fancy how surprisingly strong this couple could be. Mind you, I have not only read a fair amount of Inuyasha x Ayame fan fiction in my days as a youth but also some that revolve around Sesshoumaru x Ayame. SessAya is the definition of a refreshing pairing for both Sesshoumaru and Ayame because of how much fortitude, duty, allegiance, and respect there is between them. Sesshoumaru would give his utmost respect to Ayame by virtue of her determination and willingness to never back down from a fight, while Ayame would pledge allegiance to Sesshoumaru, for he embodies what it takes to be a strong, focused, unwavering warrior. This would seal their fates as a couple who will stay faithful to each other in sickness and in health as well as in life and in death. Ayame would even be an exceptional mother figure to Rin, considering how protective, loving, and encouraging she would be if she were married to Sesshoumaru. Perhaps the only attributes that might not make their relationship work would be how muted Ayame might end up being should she be married to Sesshoumaru, as she would be akin to a housewife, despite certain moments where she will fight alongside Sesshoumaru in battle, and would have to continually display a sense of decorum in the court while not having sufficient opportunities to simply be herself. Nevertheless, the respect and allegiance present between Sesshoumaru and Ayame would display interpersonal fortitude.

Inuyasha and Ayame will always show a whole lot more staying power and strength as a couple because of their undeniable sense of unconditional love. Sesshoumaru and Ayame as a couple may demonstrate the importance of respect and allegiance in a relationship, but InuAya trumps them by a long shot.

As for you, dear readers, I will leave the floor open for you. Which couple do you prefer? Sesshoumaru x Ayame and their brand of respect, allegiance, and duty? Or Inuyasha x Ayame and their super strong brand of unconditional love, compassion, and synergy? Comment below and let me know.

I hope you all enjoyed this, and I will see you in the next submission. Take care, stay safe, and, whichever pairing you prefer, keep showing your love for your preferred couple. 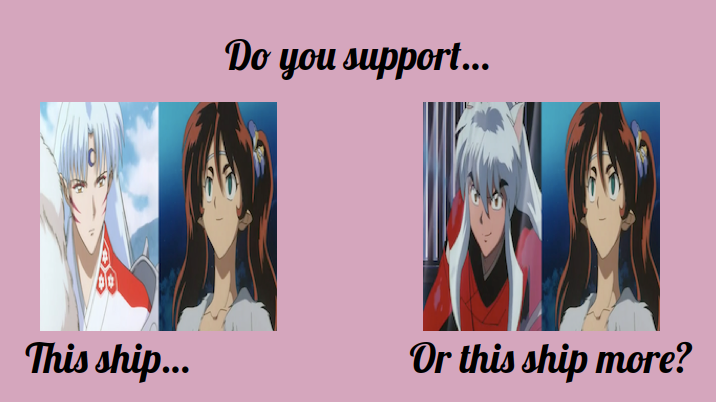