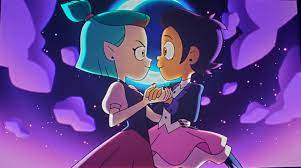 In many respects, love and fear go together more than one would think.  On Twitter, I posted a poll asking my followers which Lumity episode they’d like to see review for Valentine’s Day, and Enchanting Grom Fright won out.  In many ways, it seems apt that this would win.  However, let’s return to my original statement of how love and fear go together.

Amity explains to Luz that the monster known as Grom can shape into one’s worst fear and she feels that hers is rather embarrassing.  When we see it take shape, it’s a monstrous Luz.

Within the episode itself, Amity’s greatest fear is being rejected by someone she loves.  Knowing Amity’s relationship with her parents makes a lot of sense.  We see this with the flashback in Understanding Willow and how she is still struggling to believe that she has to earn Luz’s love even after they become girlfriends in Eclipse Lake. 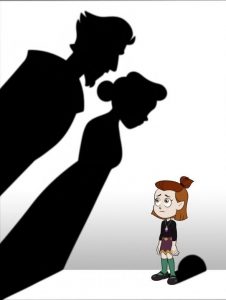 If you consider how many times Amity says Awesome Girlfriend in the latter episode, you can sense how she still believes she has to earn the love of Luz.  The hug at the end of the episode though shows how much Luz loves her. 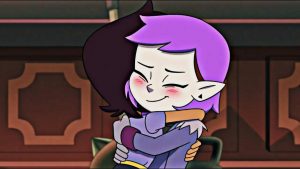 Amity facing her fear of rejection is something that won’t just go away as we see in season 2 because she has doubts about how much Luz loves her.  This also ties back into how her parents have treated her.  Do you remember the hot tub scene from A Goofy Movie and what Pete says?

Hey, my son respects me. 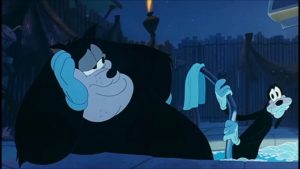 In many respects, the Blight parents, well at least Mrs. Blight come across similarly to how Peter describes his relationship with P.J. It’s less about showing love and more showing respect or as we see in season two, how much Amity can do to earn her mother’s love.  In some ways,  it’s as though Mrs. Blight treats love as a currency/allowance. 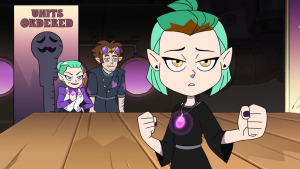 It’s interesting to see how Amity comes to terms with her fear as she faces it to save Luz. She doesn’t exactly overcome her fear of rejection but she acknowledges it and that is the first step she needs to make.  Some have taken this further and believe that Amity’s fear when facing Grom is the fear of being outed. This also makes sense as up until this point, she had not told anyone that she’s gay and that is her right.  No one needs to know until she’s ready to let someone know and we don’t find that out until we see the reveal of who’s name is on her note. 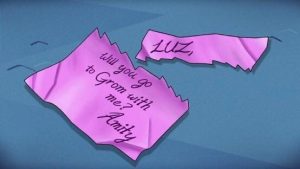 And Luz asks Amity who she wanted to ask out, she says it doesn’t matter. Partially because she got what she wanted when Luz agreed to go to Grom with her and also because she is slowly overcoming her fear of rejection.   Speaking of Luz, her fear is similar in a way to Amity as it deals with disappointing her mother. 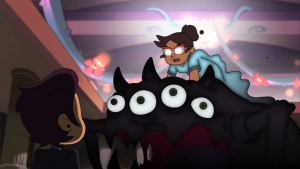 This seems to show the strong connection that Luz and her mom have as she always wants to please her mom and finding out that she has disappointed her is the thing that would crush her the most. And in many ways, this comes to fruition in Yesterday’s Lie. 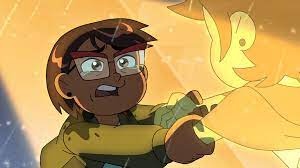 That is easily one of the most soul-crushing moments in the show and in a certain way, I feel as though this episode foreshadowed it.  Looking deeper at Luz, we see that her fears at first are rather shallow with things such as trolls,  and cats with human faces.  The only one that comes somewhat close is Eda not believing in her.  She mentioned all these but never brought up disappointing her mom, which I wonder if she didn’t realize how much that scared her. Yes, she brought up if her mom learned the truth it would crush her but she may not have realized how much. 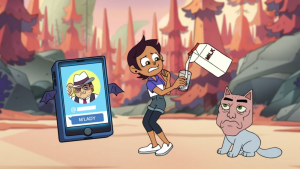 It’s interesting how much Grom can dig down and find one’s greatest fear without one knowing what it truly is.   When looking at the fear these girls face, it’s also important to note how they are there to support each other.  Such as Luz asking if Amity is going soft on her. 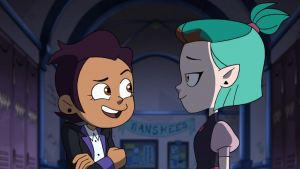 It’s a strong moment in showing that these two are on the starting path of something special and this is taken even further with the now-iconic dance.

Fans love this dance for a reason and it’s not hard to see why as it’s just so gorgeous and one of the best moments of the show.   It also speaks to another aspect of how these two find support in one another to face their fears and working together makes it easier for them to confront what they are afraid of.   In other words

Now sure, there are other elements I could touch upon such as King’s stage fright and while that is cool and ties into nicely what Grom is dealing with but I think it’s more important to focus clearly on the fears that the girls had to face. It’s a stepping stone to these coming together and the idea of embarrassment is something that’ll be touched upon if I look at other Lumity episodes, in particular, Knock Knockin’ on Hooty’s Door. 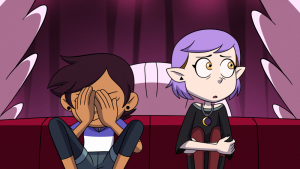 Luz and Amity have an interesting journey to becoming a couple and this episode is the first big stepping stone in bringing them together.  Before they can truly come together, they need to come to terms with their fears.  No one is asking them to overcome their fears right away as overcoming your fears isn’t something that’s done so easily and as we see in future episodes,  those fears still linger for both girls but more importantly, once they are together they can be the support one another needs to look those fears directly in the eye and show them they are bigger than what they are afraid of.