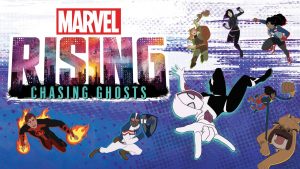 As I mentioned yesterday,  the shorts that I took a look at were a lead-in for a movie that would follow up on Gwen’s journey to find the person who killed Kevin and clear her name.  This is also the first time that you see Gwen team up with the team that Marvel Rising is focused on, the Secret Warriors.

It opens with Gwen chasing the Inhuman that killed Kevin while ignoring a dozen phone calls from her dad. As you’ll recall, I mentioned that Gwen doesn’t feel like she can go home because of what happened.  Well, Gwen happens to come across a warehouse where the villain has ended up. There is an uneasy alliance between the Secret Warriors and Gwen as they track down the Inhumans that Gwen had been chasing.  There’s also a subplot about the Secret Warriors learning to come together and work as a team with a move called the Million Fisted Hurricane. It’s good in showing how much the team still needs to come together.

This all culminates in a face-off at a Stark warehouse where the two Inhumans had learned they’d be keeping Inhuman tech ever since that put everything into motion.  It’s tense and even more so because Captain Stacy is there and he is at the ready to arrest Ghost-Spider.  Though Quake does stand up for her in the end and stops Ghost-Spider from being arrested.  This is taken even further in the end when the heroes are celebrating and Quake convinces Gwen to call her father and tell him, she’s coming back home.

Once again, while the Secret Warriors are important for the heroes I mostly want to focus on Gwen here though I do promise that won’t be the case with the next review. 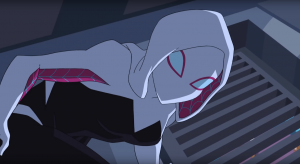 If you recall what I said when looking at the shorts,  the world was against Gwen and that is still felt here.  However, it’s a bit of a two-way street as Gwen has to learn to open herself up to others.  Understandably so with everything that’s happened to her including the death of her best friend, Gwen has become rather closed off and not exactly willing to let people into her life.  This special helps in showing Gwen and others that no matter what you are going through, you don’t have to through it alone.  I said this on Twitter while working on this event but Dove Cameron plays my second favorite version of this character and that’s because of how much heart and life she gives the character. 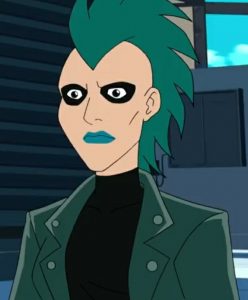 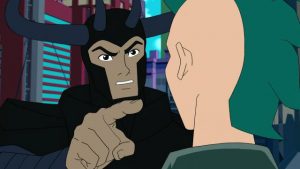 These characters are nothing more than obstacles for Gwen and the Warriors to overcome. Sheath more so for Gwen as she is the one that killed Kevin and that’s where the idea of the title comes in, she’s a ghost of Gwen’s past.  No,  they didn’t go the TASM2 route and have Kevin’s ghost or a vision appear a la Captain Stacy in that movie. But rather Gwen knew that she knew wouldn’t get closure until she had brought Kevin’s murderer to justice.  It’s a case where she represents the ghost that Gwen had been chasing ever since that night.

Exile on the other hand is important don’t get me wrong but he doesn’t hold as much significance to Gwen’s journey.  I’d say he’s more of a hired hand but even then,  he does more than that I do feel like Sheath is the more important character here.

This special/film is rather good and does a nice job of giving closure to what had propelled Gwen to find the killer in the first place.  I’ve seen most of the Marvel Rising movies and this is one of my favorites for obvious reasons but thankfully over time, other heroes do get a spot in the limelight but Gwen did get one more movie albeit a bit more lighthearted than this one and we will be looking at that for close out this event as I look at… 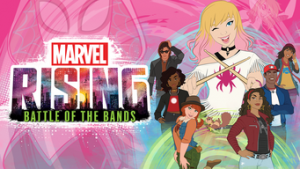