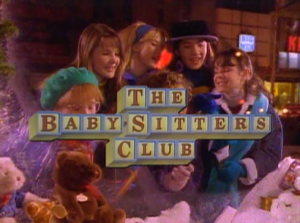 I established earlier this year that I am a fan of The Baby-Sitters Club. That is in large part thanks to the wonderful Netflix series.  Sadly, they have done a Christmas episode yet. Hopefully in the future. Though they do have a couple of Christmas books, one I wasn’t too keen on reviewing and the other my library doesn’t have. 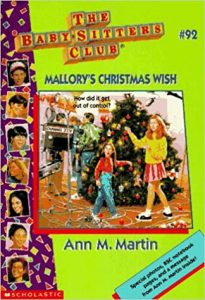 Speaking of Mallory, it’s eerie how much the actress that played her in this show looked like her book counterpart.

So, I decided to check out the original TV show as it turns out that they have a Christmas episode and it is quite good.  It’s pretty cute even if this show didn’t adapt any of the books.  One thing I’ve come to appreciate about this series is how it handles serious topics in a way that the intended audience would understand.  That is the case with this episode as it focuses on Stacey, one of my favorite members of the BSC who is diabetic.  This in the books is first brought up in the story, The Truth About Stacey. 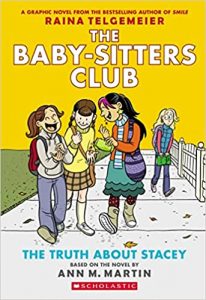 The cover for the graphic novel adaption perfectly illustrates the feeling of isolation and loneliness that can come from living with something such as diabetes.  This is highlighted even further in this episode when we see Stacey in a hospital bed and she states that she is sick of being sick.  Hashtag relatable. 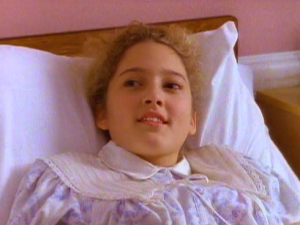 This episode does a good job of showing what somewhat that is Stacey’s position would want as you see overdo it on the sweets.  She just once in her life wants to feel normal; even as her friend Dawn worries about. her.  As someone who not being diabetic but is epileptic,  I can relate to what Stacey is feeling as you just want the things that make you feel different to vanish and go away but it’s never that easy.  You have to learn to live with it. that doesn’t mean you have to like it but you need to accept it.  I think that is where Stacey ends up at the end of this episode.  This is interesting to see in my opinion and this again ties back into how this franchise never once speaks down to its audience and knows that they can handle topics that some people might think they are not ready for.  Season two of the Netflix series did a storyline similar to this episode where Stacey was having trouble keeping her sugar in check and that caused her to stress and freak out on everyone. 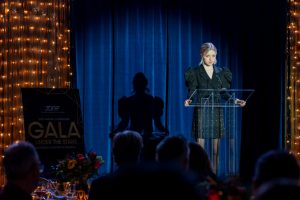 This plot was wonderful to see and I do appreciate that even for a show from the nineties, it felt honest.  Perhaps, the most honest moment in my opinion was when Stacey was babysitting a young girl and a headache was messing with her badly. 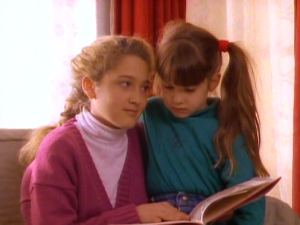 Now,  the show does have a couple of other subplots in this episode including one where Kristy really wants a baseball mitt but after meeting a young boy that is worse off than her at a hospital where the BSC is throwing a Christmas party for sick kids, she starts to bond with him and in the end, realizing that it’d bring him more joy, she decides to give it to him.  There’s also the club trying to do a Secret Santa which is pretty cute as they can’t keep a secret from one another.   But the main focus remains on Stacey where it belongs because that helps bring the audience into he life and what she is going through.

I know that this wasn’t my usual breakdown but didn’t feel right for this type of review.  I kind of felt the need to be free-flowing with my thoughts on this one to dig what this episode was saying and I think it achieved its message quite well. Even if you aren’t a fam of this series like I am ,  I’d still suggest checking this episode out as it is quite good and does a good job of making you care about Stacey.