This screenshot motivational poster is super highly Pro-Toga or Pro-Inu no Taisho. Sit back, relax, and find out why Toga the Dog General is not only a stern, appreciative, protective, strong father to his two biological sons Sesshoumaru and Inuyasha but also his daughter-in-law Ayame, his surrogate sons, Shuran, Hakkaku, and Ginta, his surrogate daughters Toran, Karan, Ayumi, and Shunran, and his allies who he treats like his sons Kuranosuke Takeda and Hiten as well as a steadfast, passionate, and valiant husband to InuKimi and Izayoi. This is also my submission for this year’s Red Ribbon Reviewers.

Fresh Prince of Bel-Air’s Philip “Uncle Phil” Banks may be a stern authority figure, lawyer, and eventually judge who runs a tight ship in his household, thus ensuring that his three biological children plus his surrogate son/nephew remain on the straight and narrow, despite their mischievous moments, while also being a loving husband to his wife, Vivian “Aunt Viv” Banks. The Cosby Show’s Dr. Heathcliff “Cliff” Huxtable may be a charmingly charismatic patriarch gifted with a silver spoon in his mouth, oodles of sage advice, and sufficient encouragement which can make his wife and kids root for him every single step of the way, while peppering his presence with a great amount of humour to make him surprisingly warm and fuzzy. Family Matters’ Officer Carl Winslow may balance his paternal duties to his wife and kids with his career as a member of the police force, thus upholding the law and protecting his family from all ills. However, Dog General Toga could easily make Uncle Phil reverently bow down to him, Cliff’s knees shake and shiver, and Carl seem more like a rookie law enforcer. Toga could even make My Wife and Kids’ Michael Kyle feel like a little boy in stark comparison to him while making the likes of Al Bundy from Married with Children, Hal from Malcolm in the Middle, and Ray Campbell-Landry from Sister Sister get down on their knees and worship the ground he walks on. Therefore, Toga is the strong authority figure, staunch law enforcer, and charismatic sage his wives and his children need in their family built on fortitude, solidarity, and perseverance, and TV sitcom dads absolutely pale in comparison to Toga’s overall majesty. Even Uncle Phil would announce all the TV dads to assemble, form a nice straight line, and greet Dog General Toga with fanfare, salutes, and pomp galore.

While Toga can be a loving father and husband like Cliff Huxtable, he is a whole lot more serious and down-to-earth than Cliff could ever aspire to be. Toga, in fact, can be easily compared to Uncle Phil and Officer Carl because of how no-nonsense he is as an authority figure while never neglecting his spousal duties to InuKimi and Izayoi as well as his paternal duties to Sesshoumaru, Inuyasha, Ayame, Shuran, Hakkaku, Ginta, and Shunran. Furthermore, Toga would be a much more supportive father figure than The Panther King could ever be to Toran, Shuran, Karan, and Shunran, thus demonstrating that blood is not always thicker than water. Ultimately, Toga can be deemed as the Uncle Phil of Feudal Era Japan because of how superbly they can balance being sternly sturdy authority figures, with Toga being a high-ranking warlord and Uncle Phil being a high-profile lawyer and high-ranking judge, and mighty patriarchs who unite their families under one roof through thick and thin. The only difference is that Uncle Phil is mostly on the choleric side in a more bombastic manner, while Toga’s choleric personality is subtler and more refined.

The comparisons between Toga and Uncle Phil can be attributed to both of them being affluent men of power, experiencing varying degrees of strife, discrimination, and violence, and rising above their troubles to make something greater of themselves by being a pillar of strength to their families. They have also seen two different sides of their wives united in their roles as staunch matriarchs, with InuKimi and Izayoi being Janet Hubert’s Aunt Viv and Daphne Maxwell Reid’s Aunt Viv to Toga’s Uncle Phil. Where romance is concerned, Toga’s marriage to InuKimi is out of duty while his marriage to Izayoi is out of love, as InuKimi is a powerful career woman while Izayoi is a loving yet stern noblewoman who unconditionally loves her husband and children. Nevertheless, he loves them just the same.

While there is no doubt that Toga has kept Sesshoumaru, Inuyasha, and Ayame in line because the former two are his biological sons and the latter is his daughter-in-law, he could also prove himself to be a much stronger father figure to Shuran, Hakkaku, Ginta, and Shunran. For those of you who have remembered the classic Season 4 episode “Papa’s Got a Brand New Excuse”, you would find yourselves tearing up profusely at the ending. While Lou Smith was an opportunistic deadbeat dad, the Panther King was a vicious, cruel, ruthless despot who manipulated his own biological children to gather human sacrifices so that he can be revived. The twist was that he sucked out Shuran’s, Karan’s, and Shunran’s powers and left Toran utterly shaken before they were revived by Sesshoumaru’s Tenseiga and he was finished off by Inuyasha’s Tessaiga. The worst misdeed Lou did to Will, his own biological son, was abandon him, which, while atrocious, was nothing compared to what the Panther King did to his own flesh and blood. Toga would, therefore, be the father Toran, Shuran, Karan, and Shunran desperately needed in their lives. Where Hakkaku and Ginta are concerned, although they are the comic reliefs, they do also deserve a strong father figure in their lives, not just older brothers from other mothers like Sesshoumaru, Shuran, and Inuyasha. Beneath their goofiness and fun-loving personalities are two souls who want direction and structure in their lives when it comes to growing into manhood. Knowing the abuse Toran, Shuran, Karan, and Shunran endured as well as how much Hakkaku and Ginta wanted a proper father figure in their lives, Toga would go out of his way to provide them with a home and make it his solemn vow to protect them from any harm. This strong sense of fatherhood would even extend to their human friends Kuranosuke Takeda and Ayumi as well as their frenemy Hiten, for they are reminded that they are part of the family regardless of blood or alignment, as well as all of his grandchildren including Kohaku, Kai, Souta, Rin, Shiori, Kanna, and Shinta, thus passing down his wisdom onto them.

While Toga bears Cliff Huxtable’s affability and Carl Winslow’s familial stronghold, he emulates Philip “Uncle Phil” Banks’s sternness, fortitude, courage, authority, unconditional love, and unwavering sense of authority to a tee. From being a loving husband to both of his wives to keeping Sesshoumaru, Inuyasha, and Ayame in line to being a strong surrogate father towards Toran, Shuran, Hakkaku, Ginta, Karan, and Shunran to welcoming Kuranosuke, Hiten, and Ayumi to his family to being a strong grandfather to his grandchildren, Toga has it all in spades. He is always there to be the shoulder to cry on when his family is down, the stronghold to keep his family growing, and the pillar of strength to ensure that nothing invades their home.

I hope you all enjoyed this, and I will see you in the next submission. Take care, stay safe, and never forget to salute Dog General Toga as a great father figure, everybody.

Toga the Dog General or Inu no Taisho from Inuyasha belongs to Rumiko Takahashi and Sunrise. 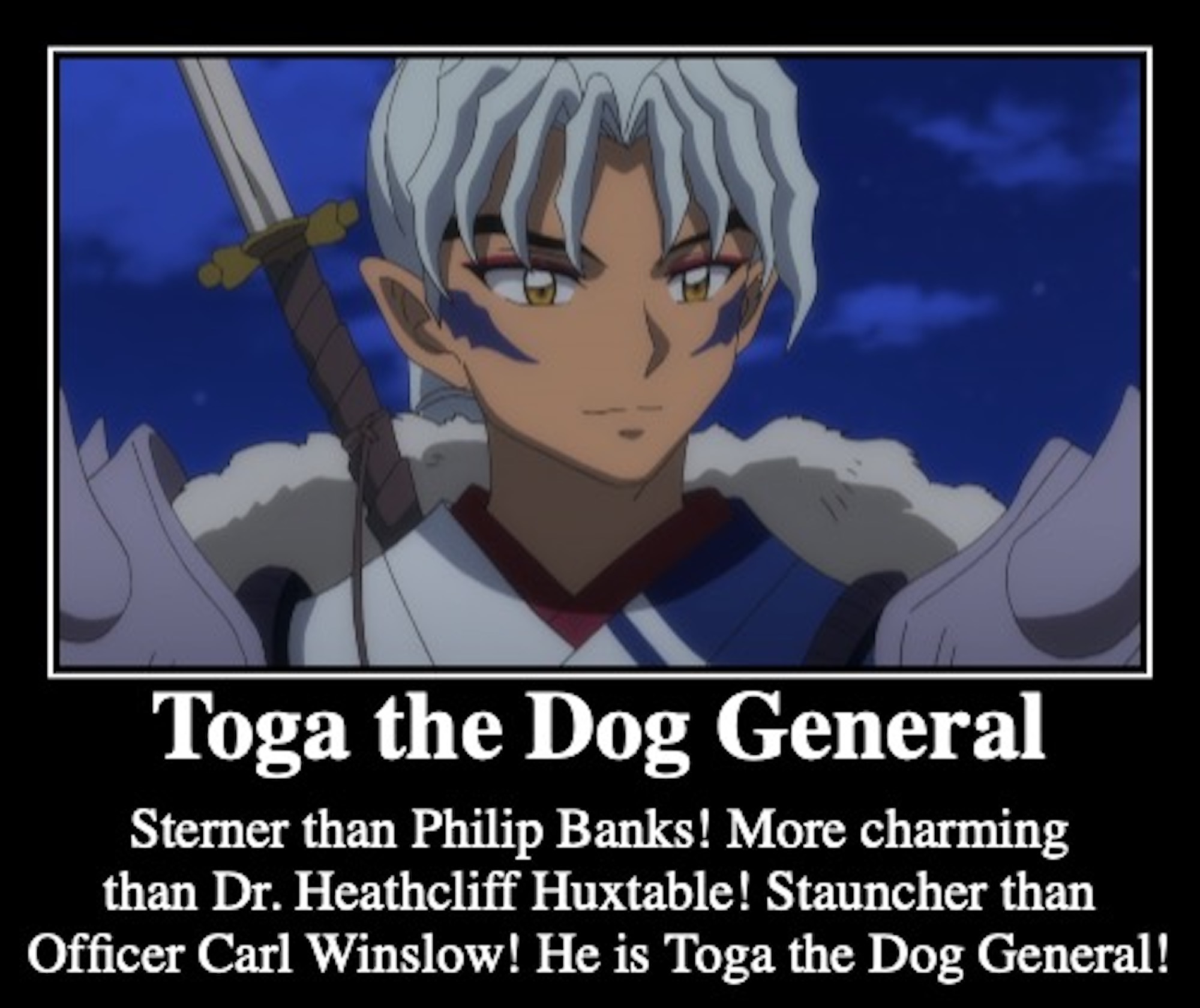