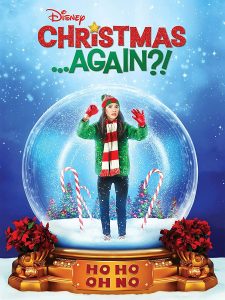 There has been a recent uptick in queer Christmas movies.  Hallmark has released a few and Kristin Stewart was in one last year for Hulu and just this year, Netflix released a new one called Single All The Way. 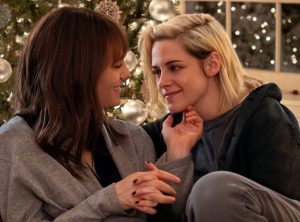 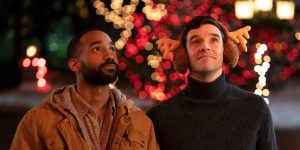 And just this month,  Disney Channel released a new movie featuring a same-sex couple.  In many ways, it’s not bad but at the same time,  it feels like in most cases Disney being behind the curveball once again.  Though I do believe that inherently comes from the setup of the movie as is a time loop/Groundhog Day movie where the lead character lives Christmas mover again until she learns to accept change and that it is okay to embrace new things and traditions aren’t what define the holiday.

Therefore, the other characters do not get as much development and her uncles are perhaps the least developed characters.  On the one hand, I do appreciate that the movie wastes no time in introducing us to them as we first see a picture of them in the opening credits.  So, that’s nice and the film does establish that they’ve been married for some time.  So again, that’s nice.  However,  some of my issues come from how they are treated.  For example,  Bruce is used for such a painful joke where everything goes wrong and ends up hurting himself.  Yes, there is a payoff to this s in the end when their niece helps him to avoid this issue. 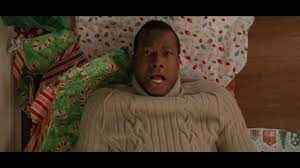 Oh, and Gerry is a lawyer that is practicing standup . The Jokes are of Disney Channel quality, make of that what you will.  As I said, there isn’t a whole lot to this couple and yes, that does partly come from the fact that they aren’t the main character and also because of the time loop nature of the movie.

Another area where credit is due,  this is the first DCOM to feature a gay couple sharing a kiss.  So, that’s nice but this is similar issues to how I felt with Loki revealing he’s bisexual to Sylvie. 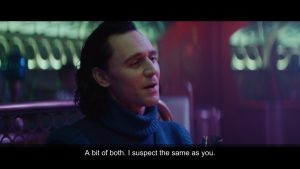 The sentiment is nice, yes and I do appreciate the acknowledgment but it feels too late to hold any significant meaning.   I know that I always use this as my go-to but look at how Luz and Amity’s relationship was handled and how their first kiss held weight. 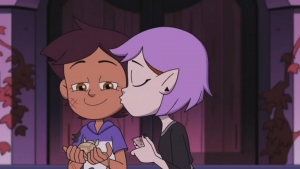 Because we were given time to get to know Luz and Amity, that kiss meant something and while sure not all kisses need to be as grand as that one,  it meant nothing here because the movie didn’t allow us time to know these two.   Sure, we were given little insight into them.  It kinda stinks, again I don’t think they are bad characters and they are a cute couple. but I wish we had gotten to know more about them.  Ah well.   Maybe one day we will get a DCOM with a queer lead.  In the meantime,  here’s a Christmas song from an IRL couple that happens to play the best live-action gay couple from Disney.