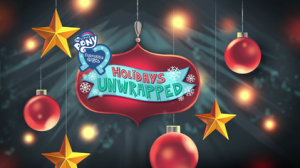 The Equestria Girls Holiday Special from IDW is perhaps one of the worst stories to come out of this franchise.   It decided to try and use the holiday setting to tackle cyberbullying.  I am all for stories that want to show how bad that can be but considering that this story was set after the events of Rainbow Rocks,  I found it heartbreaking how quickly the Humane Six turned on Sunset Shimmer and blamed her as being the one that was leaking secrets of the friends online. Things became so bad for Sunset that at one point she broke down crying in the school hallway. 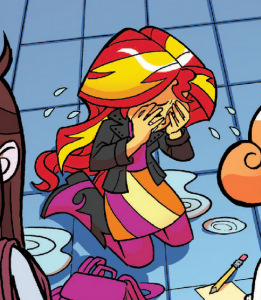 That’s truly how I want to spend the holidays,  with a character I love being betrayed by her friends because they don’t believe her when she says she’s not the cyberbully.  Not!  Thankfully in 2019,  Equestria Girls finally got a good Holiday Special.  Now apparently, what we ended up with was not originally pitched. The original pitch was meant to be an hour-long winter special and would have even explored what happened to the Sunset Shimmer of the human world.

While that would have been nice, I do think what we got was pretty good as well. I’ll admit that I didn’t know what to expect when the promos aired, but we got a series of seven-minute shorts.  Now while I am reviewing this for my MLP Christmas entry,  some of the shorts are better suited for Thanksgiving, mainly the third and sixth shorts.  Though the rest of the shorts do fit better for this time of year whether it is the actual traditions that people may do such as donating to Toys for Tots and Secret Santa’s or stuff that people partake in during winter vacation such as a snowball fight. 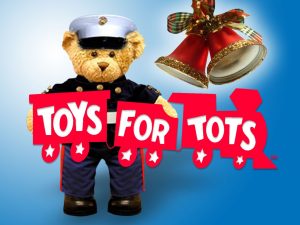 I should also note that this holiday special was also the last piece of media to feature the EQG characters.   In a way, it’s a bit sad that the EQG girls never got a proper goodbye, but this special serves as a nice goodbye to the characters of Equestria Girls.

I will be doing a brief rundown of all the shorts and at the end giving my overall thoughts and letting you know which is my favorite and which is my least favorite.  With that out of the way, let’s take a look at the first short,  Blizzard or Bust. 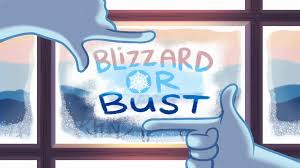 This first short is perhaps the least Holiday centric short from the special.  That doesn’t make it bad but rather the connection is a bit tenuous as it focuses on the girls trying to create a fake snowstorm to get out a test that they weren’t prepared for. There are some cute moments but this short is mostly nothing more than a montage of the girls trying to pull off this prank.  My favorite moment is perhaps the snowman that Pinkie creates. 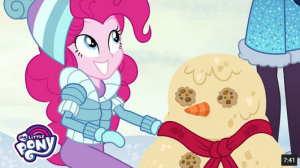 I don’t think this short is bad but it is perhaps the weakest entry.  Ah well, perhaps better to start with a weaker entry than end with a weak entry.

Let’s move on to the second short,  which in my opinion is perhaps the funniest, Saving Pinkie’s Pie. 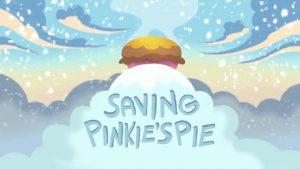 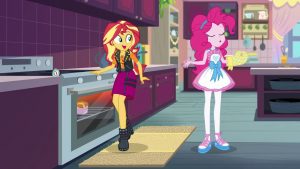 This one is cute as Sunset Shimmer is at the Pie household as Pinkie explains that every, Pinkie bakes a souffle for Rarity but Rarity never gets to try it as it never gets to Rarity on time and it appears that may be the case this year as there is a full-on snowball war going on in the neighborhood.  And I say war because that’s exactly how the short treats it. 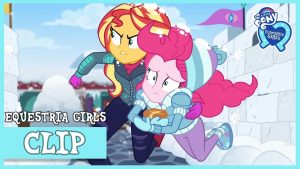 How seriously they treat the snowball war is perhaps what makes this short so funny and in the end, Rarity does get to eat the souffle but not before Dashie tries to snowball he but that backfires. 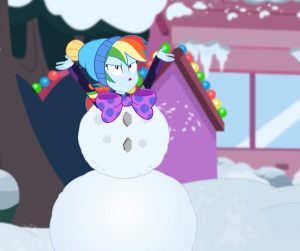 I’ll admit that I didn’t quite get the third short,  it wasn’t bad but I kinda felt like there were way too many moving parts.  Again, not bad but I didn’t get what was going on.  Anyways,  that brings us to The Cider Louse Fools. 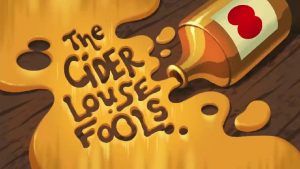 This short had a lot of moving parts and I guess that is to be expected when Flim and Flam are involved as it is essentially about Sci Twi helping the Apples avoiding having their cider taken by them from Flim and Flam.   The thing about it is there are so many moving parts within this short.  I did like how Sci Twi tricked the scam artist brothers with cardboard cutouts. 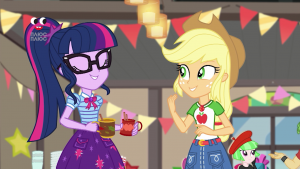 Again, not a bad short in of itself but I feel like I’d need to rewatch it again to properly enjoy it. Let’s move on to the next short which gets to the  Toys for Tots thing I mentioned. 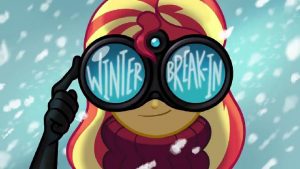 This one is pretty fun as the girls are getting ready to donate gifts for Toys for Kids, their version of Toys for Tots.  They go to a storage unit that Sunset has kept her stuff in.  This does make me wonder how stuff she’s acclimated to since going to the human world and how does she afford it.  Because besides the Rainbooms and revealing in an earlier short that she’s this world’s version of Banksy in a way,  I don’t think she was ever seen working.  Ah well, I’m overthinking things.  This short is pretty fun as it turns out the key had been left in Sunset’s locker at the school.  And the whole idea is the girls coming with different ways of breaking in hence the title. 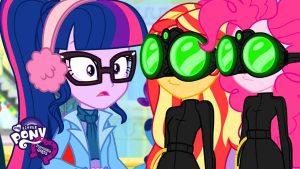 Sci Twi is perhaps at her best in this short pointing out the various flaws in the various plans that are quite a bit fun and I do like that she says why not ask Principal Celestia to let them in and she does.  The ending of this short is perhaps my favorite moment as I love seeing the girls handing out presents to the kids. 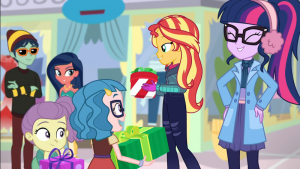 Something about seeing the girls hand out presents to the young kids helps put me in the holiday spirit.  It’s such a sweet little scene that is probably one of my favorite EQG moments.

Now, let’s get to my favorite short.

Dashing Through The Mall.

The girls are about to do a Secret Santa type thing where they’d exchange presents but Dash forgot and hadn’t gotten a present yet as she was meant to get something for Fluttershy.  This is where the name of the short comes in as Dash ends up at a store Zephyr Breeze works at and wow,  the EQG version of Zephyr is so much better than his pony version.  Perhaps because we spent less time with him but in this one short and seeing him work a retail job,  you got the sense that he cared about his older sister more than what we saw in the MLP show.  Sure, none of the gift ideas are good for his sister at first but it is nice seeing him try and help Dash.  Yeah, there is a hint of him doing it because he likes RD but it works and does capture how hard it can be to find the perfect gift for someone you care about. 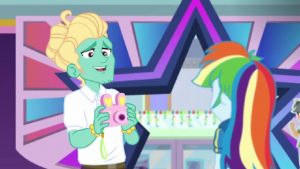 Finally,  he helps Dash find the gift even if he may have twisted the truth in telling her that Flutters’ camera broke last year when it didn’t but it works out in the end as Fluttershy loves the camera even though she already had one.

Now on to our last short, 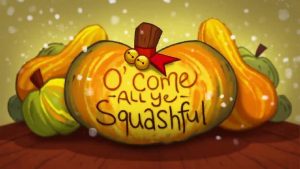 With this one, I want to focus less on the shot itself and how it made me feel.  Okay, so the plot is pretty basic, AJ wants to start a new tradition of the friends taking a photo and sending it out to the school.  She tells the girls that they’ll send it out to the school.  Applejack tells them that the theme is a cornucopia.  And the girls mistake this as meaning to dress up like the vegetables that you’d find in one of those things.   It’s pretty funny as Rarity even goes so far as to make the outfits.  AJ laughs at the misunderstanding and the final moment the girls wish everyone happy holidays.

It’s a small moment and not as grand as the goodbye FIM got but having the last moment having the girls look directly at the camera as though they are wishing the audience happy holidays feels as though they are also saying thank you for going on this journey with us.  It’s small to be sure but seeing it again got me a little emotional hearing all the girls saying happy holidays.  It’s sweet and does serve as a nice sendoff for Equestria Girls.

This is the better EQG Holiday special as all the shorts are quite fun and the nice thing about a compilation special is that if you don’t like one short, you may like the next.  While I think Blizzard or Bust is the weakest and I was left a little confused by The Cider House Fools,  I thought the rest of the shorts were quite good with Dashing Through The Mall being the best entry. I wouldn’t mind adding this to my holiday watch alongside the other MLP holiday episodes.