This piece of Ayame fan art with the completed wing tutorial hosted by the DeviantArt team is dedicated to FrancisMatthew2007 who celebrated his birthday yesterday and MonsterArts4000 who is celebrating her birthday today. So, I wish you a lot of love, joy, and prosperity on your very special days, a most blessed Thanksgiving Day, and a lot of fortune and fortitude in your lives as artists and as people. Furthermore, this is my entry for this year’s Red Ribbon Reviewers’ submissions as well as this year’s Inuvember submission. For this Thanksgiving feast, Ayame is taking over the show in all of her jungle woman power, thus being determined to take down all of her enemies with her courageous combat prowess, furious fists, sterling stamina, and superb speed.

The African Jungle, within the Temple of the Animal Gods. You enter a bright red-orange chamber complete with the trademark gold floor. You see three pairs of wings plastered on the wall in the colours of gold, silver, and bronze. Those wings might have belonged to the Birds of Paradise who are huge bird demons known for terrorising the family. The wings plastered on the wall deprived of any meat and laminated in gold, silver, and bronze denote that the one who has accomplished this is an accomplished huntress whose fierceness is never to be underestimated by any stretch of the imagination. In fact, she has served the Bird of Paradise meat as a special delicacy for their version of Thanksgiving. A 36-year-old woman approaches with auburn-red hair, a sleekly athletic physique, a curvaceous figure enough to provide any Greek and Roman goddess a huge portion serving of sheer jealousy and covetousness, and an iris in her hair. When she was little until she was a teenager, she had her hair in pigtails. However, as she grew, she consistently let her hair down, thus denoting her entry to womanhood. She notices you looking at her, as she motions you to come forward. She emits a snarl, raises her toned arms, and flexes her biceps while letting out a powerful roar to frighten leopards, lions, tigers, and jaguars. In fact, her roar would make the likes of Mufasa, Sarabi, Simba, Nala, Kopa, Kovu, Vitani, and Kiara super proud. She is Ayame the queen of the jungle, the surrogate daughter/daughter-in-law of Toga the chief of the jungle, younger sister-in-law/former lover of Sesshoumaru, surrogate younger sister of Shuran, Hakkaku, and Ginta, surrogate older sister of Shunran, and, most importantly, Inuyasha’s most treasured, adored, and beloved wife. Ayame’s leopard-skin two-piece brassiere perfectly emphasises her cleavage and accentuates her magnificent figure, thus showing that she is never a damsel-in-distress. Instead, she is a powerful, take-charge, brave warrior woman who is just as strong as any warrior man, considering the many occasions she has beaten opponents much larger than her into indubitable submission. thanks to her bare fists, fleet feet, and never-ending fighting prowess.

Ayame’s super strength, astounding athleticism, furious feet, and doubtless determination are coupled nicely with her goddess-like beauty, warm heart, and the solidarity she demonstrates to her family and her friends. Jane Porter and Ann Darrow would certainly salute Ayame for her sheer adventurousness, resourcefulness, and cunning. She could traverse to the Amazon tribe, issue a challenge to Queen Hippolyta and her warriors in Pankration, and emerge as the victor. Xena and Gabrielle would love to compete with Ayame in various Olympic sports while admiring her complete athleticism. Callisto would fancy Ayame, her amazing speed, and her sleek musculature, but the latter would tell the former that she is not interested. Sheena, Queen La of Opar, Jana of the Jungle, Rulah, and Shanna would love to partake in weightlifting, boxing, wrestling, kickboxing, and various forms of hand-to-hand combat with Ayame because of how formidable she is as their opponent. They would even have a go with lifting very heavy weights, with Ayame completely dominating them in the super strength department. Aphrodite, Athena, Hera, Demeter, Hestia, Helen of Troy, and Artemis would easily die of jealousy because of how effectively Ayame combines beauty, brawn, and brain to make her a complete warrior. Ayame has earned every queen’s, high priestess’s, goddess’s, and warrior woman’s respect, allegiance, and reverence.

As queen of the jungle, Ayame does her very best to ensure security, solidarity, and protection to be the strongholds of her jungle home. She incorporates her super strength, incomparable combat prowess, and skills as a kickboxer, boxer, and complete martial artist to smash, crash, and crush any poacher, looter, and plunderer who is so brazen to annihilate her jungle home and her family. Her mighty jungle yell could make even Tarzan jealous for how ear-shatteringly powerful it is.

Ayame prides herself on being Inuyasha’s wife because she is a proud, happy, and unconditionally loving mother of seven sons and seven daughters. There is no doubt that her sons have become super strong and mightily muscular jungle warrior kings thanks to Inuyasha whipping them into fantastic shape, while she also does her part in reminding them about their duty as protectors of the jungle, but their daughters are just as courageous, steely, and powerful. 21-year-old daughter Kiriko is a high-degree specialist in various martial arts, boxing, hunting, tracking, and weightlifting, thus proving herself so superbly as a warrior who never gives up. 20-year-old triplet daughters Momoko, Makoto, and Mikoto are fierce, fearless, and ferocious young warrior women who compete in boxing, kickboxing, and Pankration while giving poachers a huge boot. 19-year-old triplet daughters Maya, Minako, and Meika may seem lovable in a rambunctious way, but their strength, fierceness, and combat prowess are attributes to behold because of how superbly they can dish out pain to any perpetrator thanks to their mighty fists. Ayame is so proud to see her daughters grow into beautiful, courageous, determined jungle warrior queens who will never be stopped.

Ayame is not just relegated to be the loving mother, for she is a whole lot more than that because of her strong relationships with Sesshoumaru, Shuran, Inuyasha, Hakkaku, Ginta, and Shunran. Back when Ayame was a child, she used to have a crush on Sesshoumaru due to his courage, strength, and determination. She even had a relationship with him when she was a young teenager, and they seemed to have a loving relationship with each other through Sesshoumaru’s respect for her and Ayame’s admiration for him. However, as Sesshoumaru took the mantle as the jungle high priest and Ayame became the jungle queen alongside Inuyasha as the jungle king, they ended up becoming the closest of in-laws while supporting each others’ endeavours. Sesshoumaru and Ayame enjoy having meditation and yoga sessions, practicing martial arts such as judo and jujitsu, and working out every morning. Ayame considers Shuran to be the most huggable older brother figure ever, given their various weightlifting and wrestling sessions and the amount of competition they have with each other. To say that Ayame is overjoyed to have Inuyasha in her life is the understatement of the millennium. She is ecstatic and blessed to have him in her life, for he can see a strong, compassionate soul in her, and she can see a courageously determined soul in him. Inuyasha’s and Ayame’s unconditional love for each other is filled to the brim with passion, intimacy, compassion, understanding, allegiance, and sacrifice, for they will die for each other if they have to. Ayame is also thankful to have her surrogate brothers Hakkaku and Ginta be a part of her life because of the many times she enjoys sparring with them in various martial arts and their epic marathon runs in the jungle. Finally, Ayame and Shunran have a relationship that would make even the closest of siblings blush with envy. In fact, Ayame’s big sisterly relationship with Shunran signifies how much she will always be there to support her in times of joy and in times of strife. Therefore, Ayame has done a fine job in strengthening Shunran as a fighter and as an individual. Ayame is certainly fortunate to have a loving bond with her older brother-in-law, older surrogate brothers, her darling surrogate younger sister, and, of course, her champion of a husband.

If you were to look into a thesaurus, a dictionary, and/or an encyclopaedia to locate the definition of Ayame, you would automatically see that she is a jungle queen who has the strength of Heracles and Samson, the take-charge attitude of Hippolyta, the sensuality of Delilah and La of Opar, and the complete athleticism of Xena, Sheena, and Shanna. Her strength, stamina, and combat prowess can easily help young girls transform into courageous women, as demonstrated by how wonderfully her daughters have grown.

I hope you all enjoyed this, and I will see you in the next submission. Take care, stay safe, and please show reverence, allegiance, and respect to Ayame as your jungle queen, everybody.

Ayame from Inuyasha belongs to Rumiko Takahashi and Sunrise. 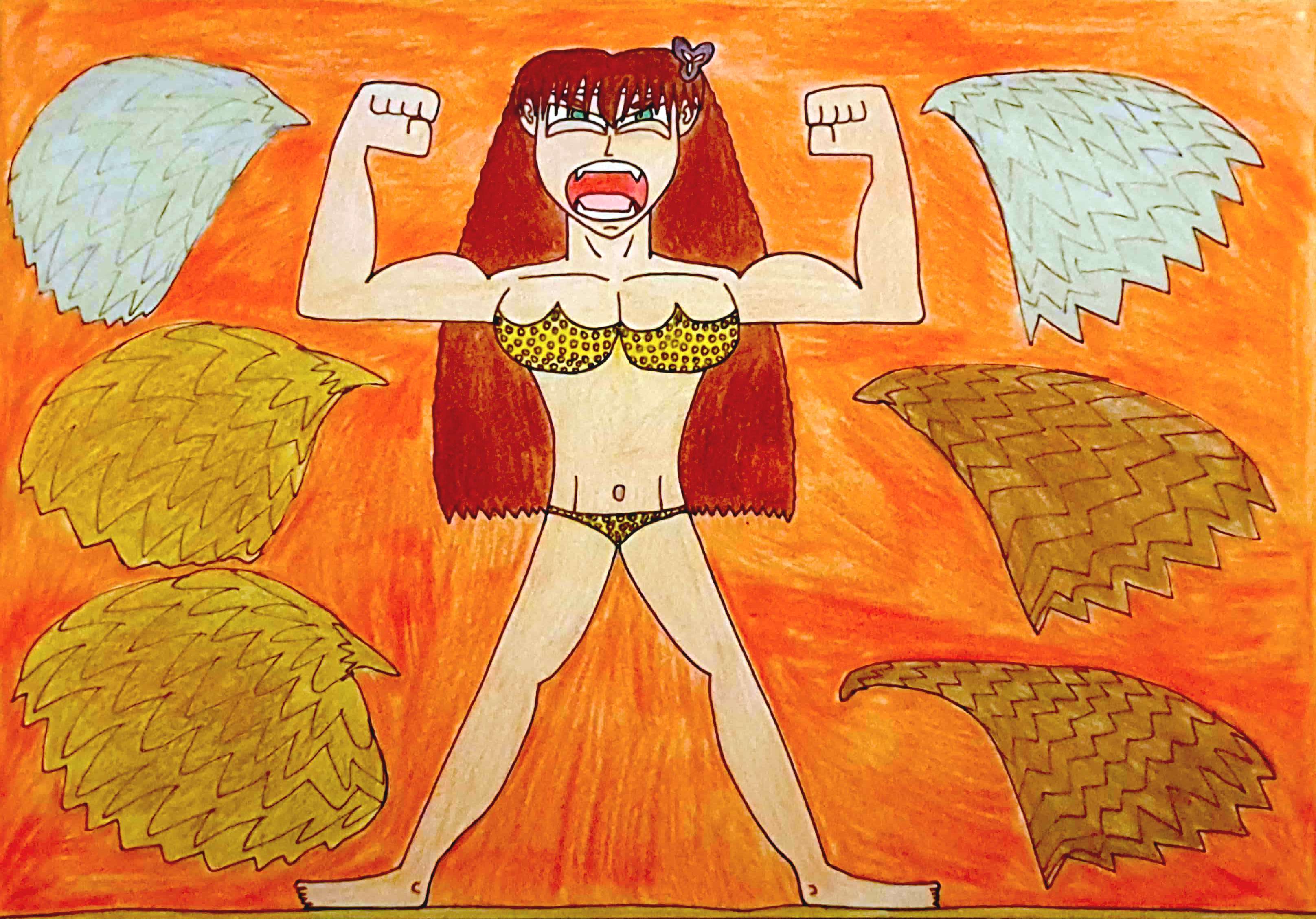