This piece of Sesshoumaru fan art accompanied with the completed DeviantArt eye tutorial given the wall decorations and the statues #DATutorialEye is dedicated to DCLover4Ever, GuardianBellaluna, Funactivefriend and Raving-Lunatic who are celebrating their birthdays today. So, I wish you a lot of love, joy, and prosperity in your lives as artists and as people. Furthermore, this is my entry for this year’s Red Ribbon Reviewers’ submissions as well as this year’s Inuvember submission. Throughout today until the first week of December, do expect individual jungle warrior profiles not only for Sesshoumaru, Shuran, Hakkaku, Inuyasha, Ginta, Ayame, and Shunran, thus being reserved for today until next Saturday, but also for Kohaku, Kai, Souta, Rin, Shiori, Kanna, and Shinta from December 1 until December 7. Spoilers, the only garments the guys will be featured with are loincloths and the girls in some form of jungle-style brassieres.

Dear readers, picture yourselves entering a huge temple in the African jungle. Its marvellous architecture complete with gold and silver statues, leopard-skin curtains with bronze curtain holders, crimson-violet walls and ceilings, and torches lighting the path for visitors, families, and friends alike entice your sight and the scent of incense perfumes the entire room. Equally notable about the walls and ceilings are eyes staring down at you lot, observing your every move while you are being cautious to never cause any disruption from occurring. No doubt are trepidation and fascination dancing around your mind, body, and soul, especially when you see huge golden icons of anthropomorphic dog yokai as well as leopard, lion, wolf, dragon, panther, and jackal yokai witnessing your every move. You enter the throne room and see a muscular 40-year-old man who has a serious gaze, loads of inner strength and determination, hypnotic golden eyes, silver hair, a crescent moon on his forehead, and his limbs and cheeks adorned with stripes. He gestures you to come forward and witness how much power he has, raises his arms, flexes his biceps, and emits a huge roar which combines that of a leopard, a lion, and a tiger. He is Sesshoumaru the lord high priest of the jungle and the older son of Toga the chief of the jungle. Normally, he would be adorned with a necklace made of leopard demon’s teeth, golden armbands, and wrist- and ankle-bands made of coconut husks. However, he is presented in his fierce, semi-nude glory with only a leopard-skin loincloth to demonstrate his sheer authority, strength, and power as a high priest, a warrior, a fighter, and a courageously determined individual whose fierceness, stoicism, and nobility can never be equalled.

Sesshoumaru’s super strength, peerless combat prowess, astounding nobility, and ruthlessness towards his enemies can never be replicated. He could leave Kavandavanda the high priest of the Kavuru Tribe in a chokehold, a broken back, torn ligaments, black-eyes, bruises, broken limbs, and a tortured psyche to the point where he would cower in front of Sesshoumaru’s sheer might. Even his followers, especially Ogdli, would be very scared of Sesshoumaru to the point where they would bow down to him. He could make even La the queen and high priestess of Opar look very amateur in her ruling methods, thus making her covet Sesshoumaru over someone like Tarzan, although he is going to treat La as a frenemy and somewhat of an ally but not a lover. In fact, Sesshoumaru could make a lot of jungle high priests and shamans go out of business thanks to his mighty presence and his peerless decorum.

Where Sesshoumaru’s high priest duties are concerned, he is not a fan of making human sacrifices, given that he is a single father to four hanyos, 32-year-old daughter Asagi, 31-year-old sons Dai and Roku, and 29-year-old Shiori; two wolf yokai, 31-year-old Kai and 27-year-old Shinta; and one human woman, 29-year-old Rin. Therefore, he would not stoop so low to sacrifice any one of his children and grandchildren to the dog, leopard, lion, wolf, dragon, panther, and jackal gods. He would, however, give demons, poachers, looters, and many other cretin who dares defile the jungle a one-way ticket to the sacrificial altar by offing them with his claws. Opponents should never forget that Sesshoumaru is a warrior because of how his super strength, martial arts prowess, stamina, stealth, steeliness, and endurance are extremely high, for he is also gifted in wrestling, kickboxing, boxing, Pankration, judo, jujitsu, Muay Thai, circuit training, and weightlifting, enough to put blackbelts in various martial arts to shame. When he is not combating opponents and sacrificing enemies and demons to the altar, Sesshoumaru blesses various weddings. In fact, he blessed his brother’s, Inuyasha’s, and his sister-in-law’s, Ayame’s, wedding as well as those of his surrogate siblings’, Ginta’s and Shunran’s, wedding; and his children’s, Kohaku’s and Rin’s; Shintaro’s and Shiori’s; Kai’s and Moegi’s; Souta’s and Kanna’s; and Shinta’s and Ai’s, weddings. Despite Sesshoumaru’s cold exterior and indubitable prowess as a warrior, when he sees that there are individuals who deserve to be in a holy matrimony, he does his best to support them.

As mentioned before, Sesshoumaru is a stern, tough yet unconditionally loving single father to Asagi, Dai, Roku, Kai, Rin, Shiori, and Shinta, and he has seen them grow from being inquisitive children to steadfast warriors who will never surrender to the enemies’ will. Asagi, Dai, and Roku may be the absolutely dutiful to their father, for they are known for being responsible, steadfast, and relentless as warriors and as his progeny, but Kai, Rin, Shiori, and Shinta are warriors who have shown the most valour, stamina, and determination, thus making Sesshoumaru proud of them. At the end of the day, Sesshoumaru is proud of his seven children for reaching their potential as warriors.

Overlooking Sesshoumaru’s paternal duties, he has a competitive relationship brimming with tough with his younger brother, Inuyasha, for they partake in wrestling, kickboxing, Pankration, and boxing. Every time they spar, they would even emit thunderous roars that could make any lion, tiger, gorilla, and/or bear absolutely envious, and their sparring matches could put that of Kerchak’s vs Tublat’s to shame. Nevertheless, as lord high priest and king of the jungle, Sesshoumaru and Inuyasha do maintain a semblance of respect, allegiance, and fraternal love towards each other through thick and thin. Sesshoumaru is also an aloof yet supportive surrogate older brother to Shuran, Hakkaku, and Ginta, for they aspire to be as strong, formidable, and determined as him, while they help him realise that there is more to life than only glory and conquest. Ayame used to be the object of Sesshoumaru’s affection, especially considering that he used to be one of the main candidates of marriage. However, her love for Inuyasha has remained stronger, with Sesshoumaru being very supportive of their unconditionally loving relationship. Aside from Ayame, women have been flocking to be his greater equal, including Toran, Ayumi, and Karan, but he has turned them down not because he hated them but because he realised that the married life has never been for him. As for Shunran, he does enjoy how much of an inquisitive little sister figure she is because of how she does her best to make him look at the brighter side of life. Outside of his familial relationship, he is also good friends with Kuranosuke Takeda and equally good frenemies with Hiten.

Sesshoumaru is never to be messed with as the lord high priest of the jungle. His strength, stealth, and combat prowess could batter his opponents’ bodies and spirits in one go, especially when they find themselves being sacrificed to the various animal gods.

I hope you all enjoyed Sesshoumaru in all of his virile jungle man glory, and I will see you in the next Inuvember submission. Take care, stay safe, and always pay homage to your local jungle lord high priest, everybody, especially if he is Sesshoumaru. 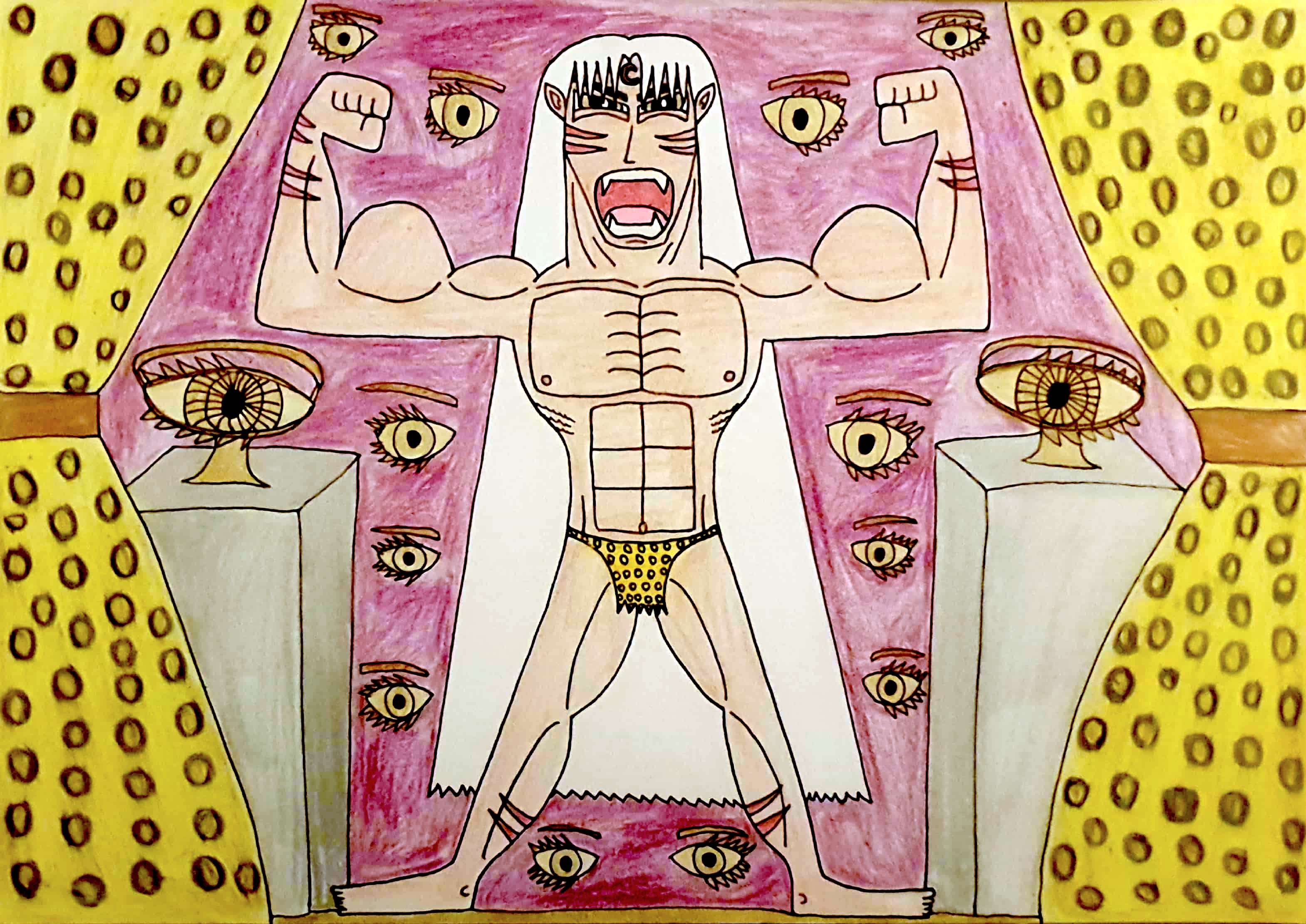