This piece of Kohaku x Rin fan art, which is part of ItsRaspring’s Halloween Contest, is dedicated to Frankboi29462, TFAseira, Barnables, brentcherry, and WillAforAwesome who are celebrating their birthdays today. So, I wish you a lot of love, fortitude, and joy in your lives as artists and as people. Furthermore, this is my entry for this year’s Red Ribbon Reviewers’ submissions as well as this year’s Inuvember submission.

The African jungle may be a wonderful place for the prince and princess of the jungle, Kohaku and Rin, to sow the seeds of their everlasting love, appreciation, and fondness for each other. The grown-ups of their lives, Sesshoumaru; Shuran; Inuyasha; Hakkaku; Ginta; Ayame; and Shunran, have all known that their holy matrimony was the stuff of legends and bloodline preservation, especially since Rin is Sesshoumaru the high priest’s most beloved daughter, and Kohaku is Shuran the bodyguard’s eldest son. For the jungle bodyguard’s eldest son and the jungle high priest’s second eldest daughter to be united in holy matrimony is an event worth celebrating to the point where Sesshoumaru himself blessed the wedding, knowing fully well that his daughter has chosen a most ideal mate for life, considering that no other warrior could ever compete against Kohaku. However, one should never underestimate how powerful Kohaku and Rin are as jungle warriors, for Kohaku’s muscular strength and Rin’s flexible agility are enough to make Korak and Meriem turn green with envy.

As the prince and the princess of the jungle, 32-year-old Kohaku and 29-year-old Rin help Sesshoumaru, Inuyasha, Ayame, Shuran, Hakkaku, Ginta, and Shunran rule their home with solidarity, protection, and perseverance. Given how formidable Kohaku and Rin are as a jungle warrior couple, it should be no surprise that they have been trained well by their fathers, uncles, and aunts. Sesshoumaru and Inuyasha were in charge of martial arts, kickboxing, and wrestling, Shuran was in charge of weightlifting, circuit training, wrestling, and bench-pressing, and Hakkaku and Ginta were in charge of boxing, kickboxing, and hunting, thus transforming Kohaku from a wide-eyed yet stern youth into a formidable, powerful, mighty warrior of a man whose strength, athleticism, and combat prowess equals those of Tarzan’s, Ka-Zar’s, and Korak’s. Where Rin is concerned, she was taught meditation and martial arts by her father, Sesshoumaru, wrestling, kickboxing, and boxing by her uncles, Shuran; Inuyasha; Hakkaku; and Ginta, and hunting, gathering, swimming, and running by her aunts, Ayame and Shunran, thus turning her from a lovably sweet young girl to a fierce warrior woman who shows no signs of surrendering while making her worthy of Sheena’s, Shanna’s, and Meriem’s admiration. Together, Kohaku and Rin have grown up to be fierce, formidable, and fearless jungle warriors who are always going to protect the jungle with all their might and strength.

Kohaku and Rin are never to be underestimated as combatants. Kohaku’s muscles, fists, feet, combat prowess, and super strength can rival any gorilla, elephant, lion, leopard, and tiger to the point where he can subdue all his enemies with one or two blows couple with his powerful headlocks, back-breakers, bearhugs, Boston crabs, and camel clutches. Rin’s super speed, agility, super strength, fists, feet, and quick reflexes are on par with cheetahs, leopards, jaguars, zebra, gazelles, and panthers, thus giving her rivals a dizzying ride to a quick defeat. Therefore, Kohaku and Rin should never be underestimated by any stretch of the imagination.

Kohaku’s and Rin’s unconditionally loving relationship as a couple displays harmony, beauty, and perseverance through thick and thin. Nobody and nothing can ever break their strong bond, for they will always stay faithful to each other. They always love to unwind with sweet love-making, massaging each other in an intimate matter, and lots of cuddling. They are also happy to be parents of seven strong sons and seven lovely daughters. 15-year-old eldest son Rikiya is a gallantly handsome jungle prince who applies his combat skills, super strength, and fighting spirit to protect his family and friends. 14-year-old triplet sons Matsuo, Mikio, and Mutsuro are strong, stealthy jungle warrior princes who are expert martial artists who enjoy taking down felons and foes. 13-year-old triplet sons Eijiro, Eikichi, and Eiriho are focused jungle princes who enjoy meditation and practicing various martial arts. 12-year-old daughter Tomoko is a lovely jungle princess who swings on vines and climbs on trees with so much ease. 11-year-old daughter Kaoruko is a gentle jungle princess who is fully knowledgeable of the rainforest’s various sources of medicine. 10-year-old twin daughters Kazuko and Kairiko are adorable jungle princesses who love to tend to the animals and plants. 9-year-old triplet daughters Mitsuko, Natsuko, and Eriko are sweet jungle princesses who may it their duty to protect the jungle, their friends, and their family with all of their hearts, minds, and souls. All in all, Rikiya, Matsuo, Mikio, Mutsuro, Eijiro, Eikichi, and Eiriho have the potential to grow up to be more powerful warriors, while Tomoko, Kaoruko, Kazuko, Kairiko, Mitsuko, Natsuko, and Eriko are going to grow up to be even lovelier princesses with suitors at their beck and call.

Kohaku and Rin are a couple who combine lovability, nobility, strength, and endurance in one fine melting pot of versatility and beauty. Their strength is not only found in how physically capable they are as warriors but also in how well their unconditional love for each other perseveres throughout time.

I hope you all enjoyed this, and I will see you in the next Inuvember submission. Take care, stay safe, and support your local jungle prince and jungle princess, everybody.

Kohaku and Rin from Inuyasha belong to Rumiko Takahashi and Sunrise. 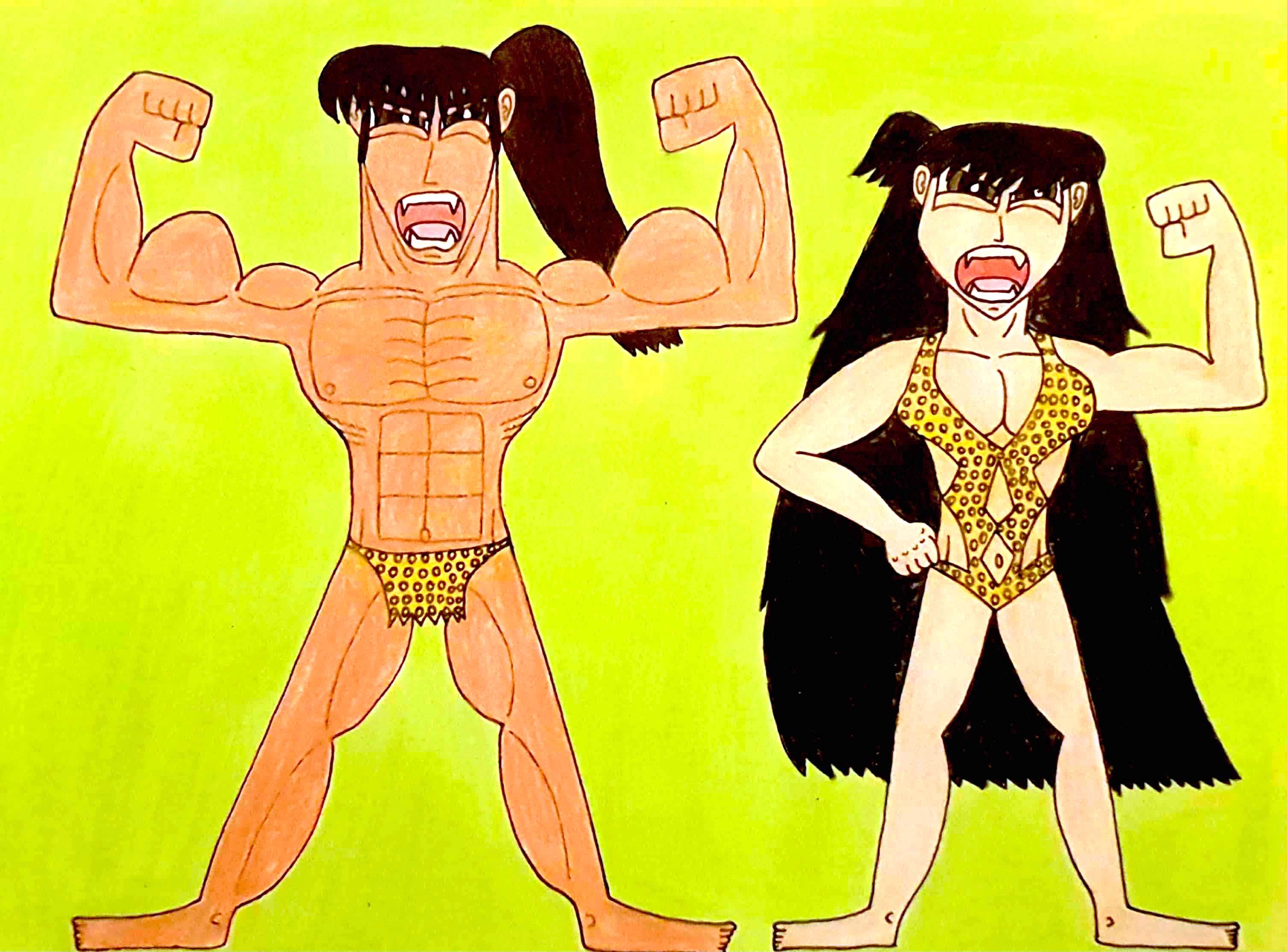