This piece of Inuyasha x Ayame or InuAya fan art, which is part of ItsRaspring’s Halloween Contest, is dedicated to Sano-BR, itsashowtime, Chillguydraws, ralucadraws, Absolhunter251, lunarials, KaylaTechHeart, and SmoothCriminalGirl16 who are celebrating their birthdays today. So, I wish you a lot of love, might, beauty, excellence, grace, perseverance, and strength in your lives as artists and as people. Furthermore, this is my entry for this year’s Red Ribbon Reviewers’ submissions as well as this year’s Inuvember submission.

Imagine taking a safari in the African jungle. All seems quiet. Too quiet. Until you hear two bellowing jungle yells which have transformed into huger roars rivalling lions, tigers, leopards, cougars, cheetahs, jaguars, and panthers. You realise those jungle cries and roars have come from the king and queen of the jungle Inuyasha and Ayame. Ka-Zar and Shanna, Tarzan and Sheena, let alone Jane Porter, and Kaanga and Jana of the Jungle, let alone Ann Mason, have absolutely nothing on this mightily muscular dog yokai jungle warrior king and ferociously fierce wolf yokai jungle warrior queen. Together, Inuyasha and Ayame are an unstoppable couple who have the mighty muscles, impeccable combat prowess, and super strength to prove that they are never to be messed with. You want proof? You just have to consult Sesshoumaru the high priest, Shuran the bodyguard, Hakkaku the messenger, Ginta the captain of the guard, and Shunran the peacekeeper, for they will testify that they have not only protected the jungle so well, but they are the cement of their powerful family.

With Inuyasha approaching 39 and Ayame currently 36, they have been a powerful couple ever since they were very young. As Inuyasha’s father and Ayame’s grandfather are the jungle chiefs, they have seen to it that Inuyasha and Ayame were going to be strong for each other through thick and thin. Even Sesshoumaru recognised how wonderfully powerful they are together when they take their enemies down. Their wish came true when Inuyasha and Ayame tied the knot when he was approaching 14 and she was 11 years old. Ever since then, they have been inseparable in terms of physical prowess and the potent staying power they have as a couple.

Inuyasha has the magnificently mighty muscles, the fierce fists, the dedicated determination, and the super strength to put his impeccable bear-hugs, back-breakers, neck-breakers, camel clutches, Boston crabs, Full Nelsons, chokeholds, uppercuts, jabs, and hooks to phenomenal use against his foes to put any lion, gorilla, tiger, and elephant to shame. Ayame has the super strength, the fierce fists, the fleet feet, and the sturdy stamina to make great use of her jabs, hooks, roundhouse kicks, uppercuts, Full Nelsons, chokeholds, and clinches enough to give cheetahs, leopards, lions, and gorillas the chance to head for the hills. They do not need spears, bows and arrows, and/or knives, for their muscles, bare hands, bare claws, and fast feet are enough to wear their foes down, thus putting Gilgamesh, Enkidu, Heracles, and Theseus to doubtless shame. Therefore, if anybody threatens to shoot them, they would just bend those weapons and tear them to shreds while unleashing a huge roar and a ferocious snarl to get hunters, rival warriors, and poachers running away as fast as they can.

As a couple, Inuyasha and Ayame have a loving relationship that is full of trust, unconditional love, and boundless intimacy complete with hot, passionate nights of steamy love-making which would make the likes of Namontack x Basuli and Kocoum x Tarzan almost pale in comparison to the beauty of Inuyasha x Ayame. They will never leave each others’ sides and will be always strong for each other, thus ruling side by side as king and queen of the jungle. They are also equally strong parents to their fourteen powerful children consisting of seven powerfully muscular sons and seven potently fierce daughters. 24-year-old triplet sons Masataka, Masaya, and Masaru are powerful jungle warrior kings known for their overpowering punches, Full Nelsons of fortitude, and bone-breaking bear-hugs. 23-year-old twin sons Kenta and Keita are handsomely muscular jungle kings known for their mighty muscles, fierce fortitude, and incomparable combat prowess, given how potent their Full Nelsons are. 22-year-old twin sons Kazuhiko and Kaito are strong, handsome jungle warrior kings who are a combination of charm, fortitude, and determination. 21-year-old daughter Kiriko is a mighty jungle queen renowned for her super strength, fabulous combat skills, and excellent hunting skills. 20-year-old triplet daughters Momoko, Makoto, and Mikoto are rambunctious jungle warrior queens who are lauded for their speed, stamina, punches, and kicks, thus giving cheetahs, leopards, and jaguars a run for their money. 19-year-old triplet daughters Maya, Minako, and Meika are determined jungle queens who bear remarkable speed, strength, and stamina to defeat their enemies with their unparalleled skills. Inuyasha and Ayame are truly proud to have young and mighty jungle kings and queens as their children because of how much they have continued to prolong the bloodline and preserve the jungle. In fact, Masataka, Masaya, Masaru, Kenta, Keita, Kazuhiko, and Kaito can make Korak and Bomba jealous because of how super strong, marvellously muscular, and ferociously fierce they are as warriors, while Kiriko, Momoko, Makoto, Mikoto, Maya, Minako, and Meika can put Meriem to shame because of how determined they are as fighters.

If you do not want to find yourself being bear-hugged by Inuyasha’s mighty muscles and battered by Ayame’s mighty fists, you should definitely endeavour to not mess with this king’s and queen’s jungle home. You will be grateful that you are not at the receiving end of what this powerful jungle couple can dish out.

I hope you all enjoyed this, and I will see you in the next submission. Take care, stay safe, and support your local king and queen of the jungle, everybody, especially if they are Inuyasha and Ayame. 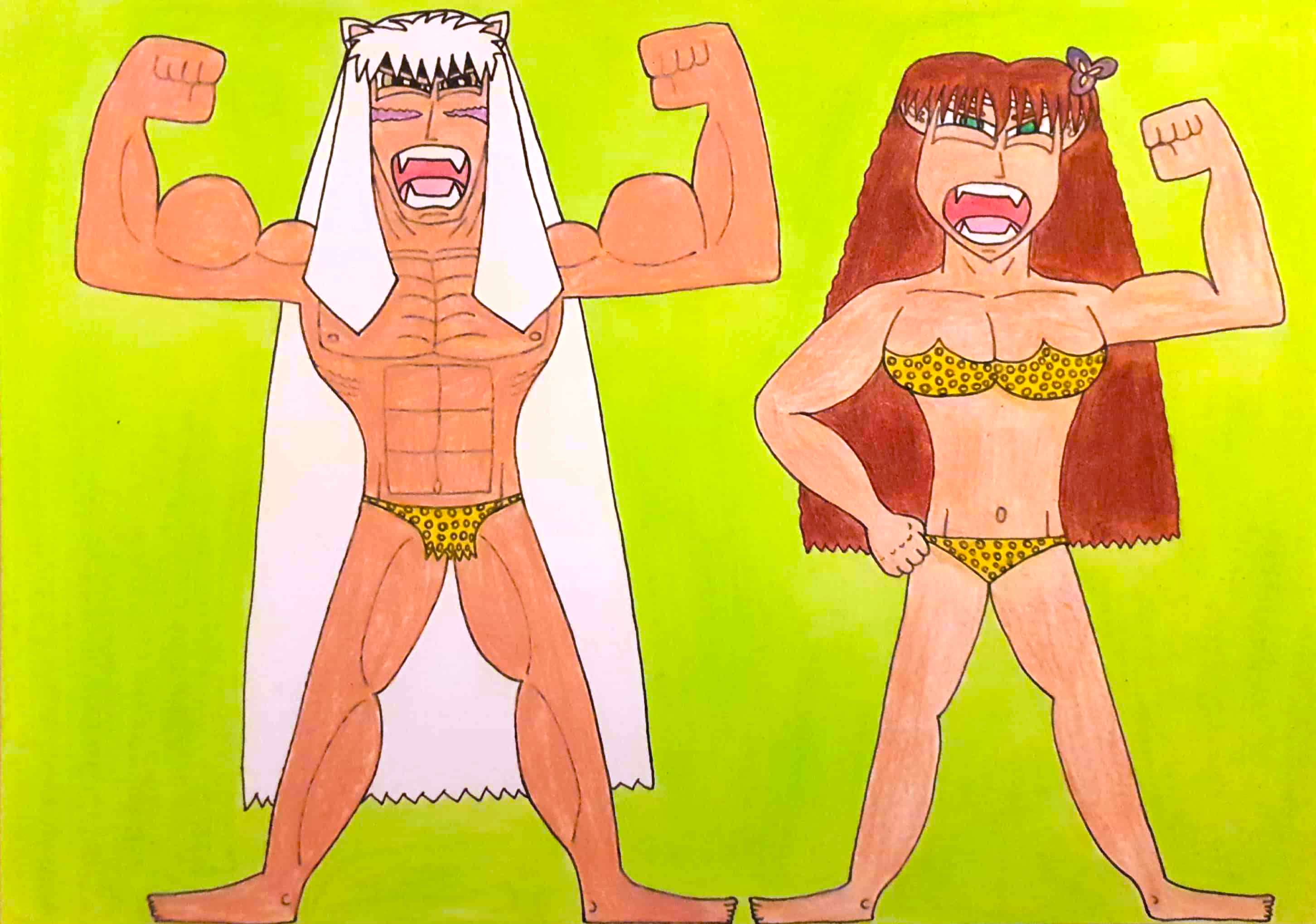