Nov 13, 2021 Anime, fan art, Inuyasha
This piece of Sesshoumaru, Shuran, Hakkaku, Inuyasha, Ayame, Ginta, and Shunran fan art, which is my submission for ItsRapspring’s Halloween Contest as well as my entry for the Jack-O-Lantern tutorial given the Jack-O-Lanterns surrounding the blanket, is dedicated to Drumsweiss, Miss-Beastly, uzikowa, RyanSilberman, RyuseDraws, Sharidaken, BeardedLuckDragon, EnzymeDevice, GS-bunfoxx18, abby-sanban, Amethyst-Ocean, FaritsRileyH, Club-Dreamiverse, Bright-BlueEyes, nicetsukichi, RavenRain-OliveSoot, yehBOO, ReiBara, crazydemonkitty, judyeve, SakuraMadana, SolGravionMegazord, DannieKW, MatthewJabezNazarioA, DrCrafty, viviannefair, ShampooNeko, Gumi-CoffeeCat, PinkieGurlz, LieutenantSeanoodle, JesterFestivle, LUKEW456, SilverkittenX9, Da-AWESOME-girl, DoodleHappyDavis, marurenai, katamariluv, SwedishSweetHeart, Mackenzie11037, MaliceInTheAbyss, zaameen, Lucy101, SuperNovaArts, missjumpcity, redpanda11 who celebrated their birthdays ranging from two weeks ago all the way until today. I hope you all had wonderful birthdays, and I wish you a lot of love in your lives as artists and as people. This is also dedicated to those who are major fans of Sesshoumaru, Inuyasha, Ayame, Shuran, Hakkaku, Ginta, and Shunran. Furthermore, this is my entry for this year’s Red Ribbon Reviewers’ submissions as well as this year’s Inuvember and my personal dedication to all the heroes, both in the military and our families at home, for this year’s Veterans’ Day weekend.
Before puberty, before parental responsibilities, before The Splendid Seven’s impeccable growth as yokai warriors, and before Inuyasha and Ginta began intimate relationships with Ayame and Shunran respectively, with Sesshoumaru, Shuran, and Hakkaku cheering them on, Sesshoumaru, Shuran, Inuyasha, Hakkaku, Ginta, Ayame, and Shunran were precocious young children under the lovingly watchful eyes of their grandfather Choro the Wolf Elder, their father Toga the Dog General, and their mothers InuKimi and Izayoi in a huge mansion in Tokyo where they spent their childhood. Where Sesshoumaru, Inuyasha, and Ayame were concerned, being the two sons of a general and two noblewomen and the granddaughter of a retired corporal has its prestigious perks because they were able to be kept in line, thus preserving the values of good decorum, a strong household, and so much unconditional love that they will always face the world head on without hesitation. Having Shuran, Hakkaku, Ginta, and Shunran as their best friends/surrogate siblings added another level of closeness, appreciation, and a firm bond that lasted through generations.
I take you back to the 31st of October 1990 when Sesshoumaru was 9, Shuran was 8, Hakkaku was 7, Inuyasha was approaching 8, Ayame was 5, Ginta was approaching 7, and Shunran was 3. As children, they always loved to huddle up to their room for a Halloween sleepover complete with decorating their bedroom in shades of deep blue and purple, a screaming face painted on their drawers, two lava lamps that glow a garish orange, and their golden bed with witch hats decorated on them as well as having their favourite Jack-O-Lantern blanket, bedsheet, and pillows. They would be in their pyjamas and tell scary stories consisting of ghosts, demons, shapeshifters, and strange happenings occurring around Japan. They would even tune in to their favourite horror movies and shows with a bowl of popcorn whether they caught Tales from the Crypt, Halloween, Creepshow, Friday the 13th, The Exorcist, Nightmare on Elm Street, and/or An American Werewolf in London, thus enjoying a good scare and chill to the bone every time they tune in to their television screens. Although they love watching horror movies every Halloween, each of them had their own tastes. Sesshoumaru always loved the psychological thrillers. Shuran and Inuyasha were more of the slasher fans. Hakkaku and Ginta cherish horror comedies. Ayame is so invested in the action elements involving horror, especially when the final fight scenes occur. Shunran is also a horror comedy fan, but she also loves the romantic elements added into horror. This was a childhood tradition Sesshoumaru, Shuran, Hakkaku, Inuyasha, Ayame, Ginta, and Shunran enjoyed partaking in during the Halloween season.
I hope you all enjoyed this extremely belated Halloween-related fan art involving seven of my most favourite Inuyasha characters, and I will see you in the next Inuvember submission. Take care, stay safe, and do not let the bed bugs bite, everybody.
Sesshoumaru, Shuran, Hakkaku, Inuyasha, Ayame, Ginta, and Shunran from Inuyasha belong to Rumiko Takahashi and Sunrise. 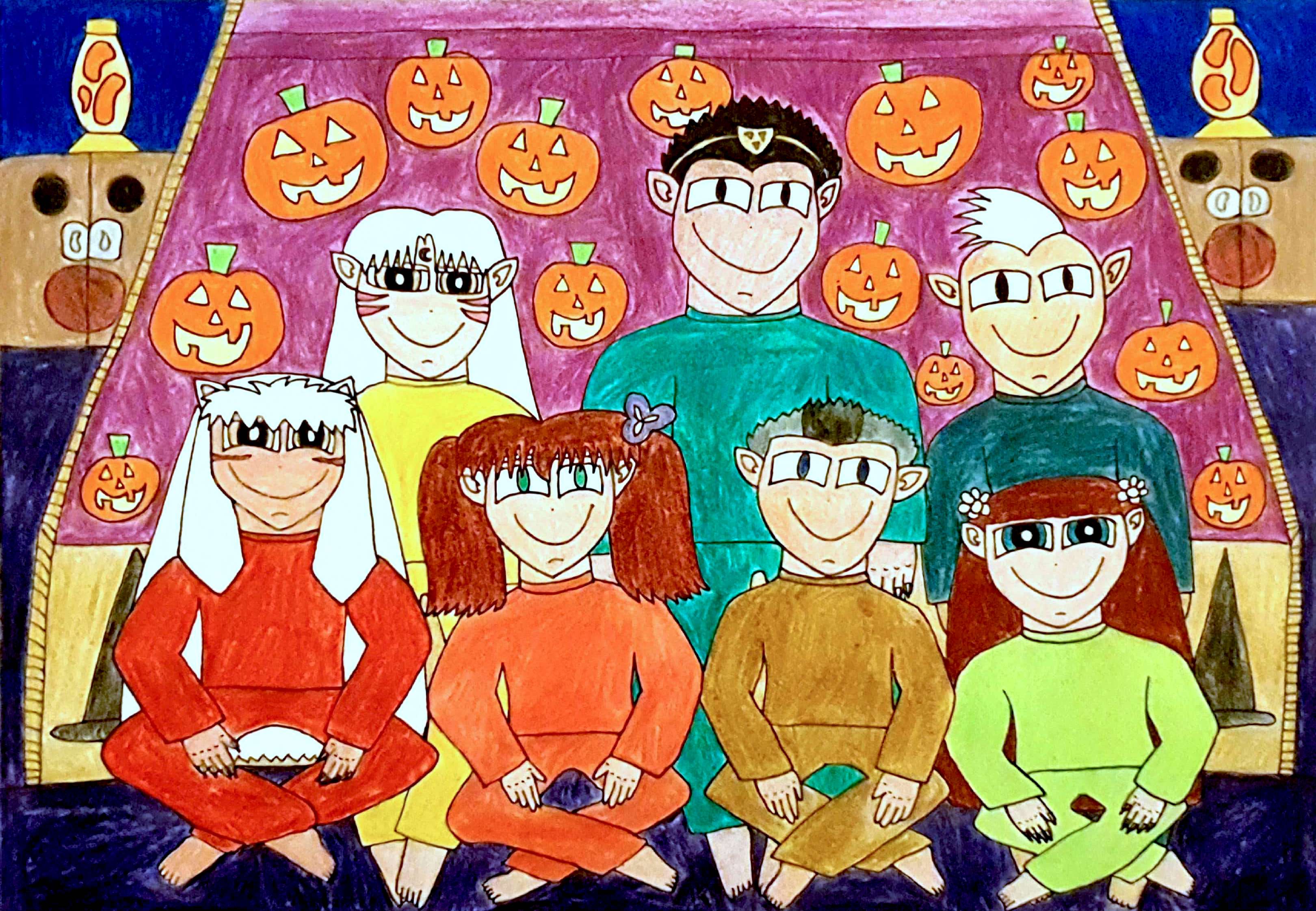