This screenshot motivational poster is super highly, utterly, and absolutely Pro-InuKimi and Pro-Izayoi with some hints of Pro-Wolf Elder, Pro-Toga, Pro-Sesshoumaru, Pro-Inuyasha, Pro-Ayame, Pro-Shuran, Pro-Hakkaku, Pro-Ginta, and Pro-Shunran thrown in the mix. Sit back, relax, and revel in how InuKimi and Izayoi represent two different sides of Feudal Era Japanese femininity, nobility, and, of course, loving motherhood. This is also my entry for this year’s Red Ribbon Reviewers’ submissions as well as this year’s Inuvember and my personal dedication to all the heroes, both in the military and our families at home, for this year’s Veterans’ Day weekend.

In the last motivational poster revolving around who I believe are the true parents in the Inuyasha universe, let alone in my Splendid Seven AU headcanon, I mentioned that InuKimi and Izayoi bear similarities to Janet Hubert’s and Daphne Maxwell Reid’s respective portrayals of Vivian “Aunt Viv” Banks from The Fresh Prince of Bel-Air thanks to InuKimi embodying Hubert’s driven career woman version of Aunt Viv and Izayoi embodying Maxwell Reid’s subdued yet authoritatively dignified version of Aunt Viv. I attribute this to my endless rewatching of The Fresh Prince of Bel-Air as well as going through my favourite episodes with Hubert from Seasons 1 to 3 and Maxwell Reid from Seasons 4 to 6 which has its perks as a devoted Fresh Prince of Bel-Air fan. I still contend to this notion because, where Janet Hubert and Daphne Maxwell Reid represent two different sides of Aunt Viv as well as embodying different facets Black American womanhood, affluence, and motherhood in California, InuKimi and Izayoi represent two different sides of motherhood and their high social status as noblewomen of the court as well as wives of Toga the Dog General aka Inu no Taisho in Sengoku Period Japan, thus being the Aunt Viv originally portrayed by both Janet Hubert (Seasons 1–3) and Daphne Maxwell Reid (Seasons 4–6) to Toga’s Uncle Phil originally portrayed by the late, great James Avery. This comparison is neither arbitrary nor entirely based on randomness, but of realising how much the two mothers of the Inuyasha universe have a lot in common with the two actresses who played Fresh Prince of Bel-Air’s Aunt Viv. Either way, both InuKimi and Izayoi are two brilliant mothers who can maintain strong family values in their own ways, thus doing their best to raise Sesshoumaru, Inuyasha, Ayame, Shuran, Hakkaku, Ginta, and Shunran to be the greatest versions of themselves.

InuKimi does don Janet Hubert’s driven career woman portrayal of Aunt Viv almost to a tee. Where Hubert’s Aunt Viv is a well-rounded, outspoken, wise, knowledgable, and formidable wife and mother who is a university professor specialising in Anglophone literature and African-American History, a very flexible dancer, and a golden-voiced singer, thanks to Hubert’s experience as a Broadway singer and actress doing Andrew Lloyd Webber’s Cats back in 1982, InuKimi is a calculating, intellectual, articulate, stately dog Daiyokai lady whose commanding presence deserves respect from her subjects and her own son Sesshoumaru, as she is the embodiment of an independent woman politician who does not permit anybody to challenge her. There is no doubt that both Hubert’s Aunt Viv and InuKimi are very take-charge career women who know how to lay the law, but the former is far more physically active than the latter, considering that Hubert’s Aunt Viv has never forgotten about her West Philadelphian roots. For instance, as much as we can remember Hubert’s Aunt Viv’s dance scene, we also have to remember the many occasions where she lets loose on anybody about to be in serious trouble, as evidenced in “72 Hours” and “Striptease for Two”. InuKimi is more subtle in her approach to let somebody know that they are in serious trouble to the point where she does not even need to raise her voice. The mere sight of her should make any troublemaker shiver, which is also evident in Hubert’s Aunt Viv. When it comes to knowledge and wisdom, both Hubert’s Aunt Viv and InuKimi implement their brains and skills in their own special ways. “The Ethnic Tip” demonstrates that Hubert’s Aunt Viv, through her career as a university professor, knows how to make African-American history approachable, engaging, and interesting to all her students. However, that does not mean that either her own son, Carlton, or her own nephew/surrogate son, Will, are going to get away from this lightly with free A’s, for they are given extra work, including researching Penn Institute’s history complete with compiling and citing from various sources. Its ending scene proves to be just as powerful thanks to Hubert’s Aunt Viv’s message on never underestimating the struggles occurring in Black America. Just because Will has been reading The Autobiography of Malcolm X several times, preached his slogans, and plastered his posters does not mean that he has a more profound and critical understanding of the entire struggle for attaining civil rights and the discriminatory issues that have occurred even way before Malcolm X, Martin Luther King, and Rosa Parks existed. InuKimi even challenges her own son, Sesshoumaru, to recognise how much he has changed after what has happened to Kohaku and, especially, Rin, thus heralding a subtle change in his heart and being just as urgent in his change as an individual. While Hubert’s Aunt Viv and InuKimi do challenge their sons’ perceptions of themselves and their respective identities, their backgrounds could not have been any more different. Hubert’s Aunt Viv was a high-school dropout before she did her G.E.D., obtained her Bachelor’s Degree through night school while supporting herself working as a hotel maid, and earned her doctorate degree at UCLA while simultaneously obtaining professorship. Furthermore, Hubert’s Aunt Viv came from a tough background, but that did not stop her from applying herself and achieving goals that were so much bigger than her. InuKimi’s life is shrouded in mystery, but she does have a very powerful lineage coupled with her prestige, nobility, and high position as a noblewoman of the Feudal Era Japanese court. Therefore, Hubert’s Aunt Viv and InuKimi represent the benefits of applying themselves as career-driven women with a multitude of ambition, drive, determination, and taking full responsibility of their family without ever wavering from adversity.

Izayoi embodies Daphne Maxwell Reid’s subdued yet authoritative mother figure of Aunt Viv really effectively. Both Maxwell Reid’s Aunt Viv and Izayoi are dignified, nurturing, understanding, honourable, forthright, and inwardly strong wives and mothers who will do everything they can to protect their homes with every fibre of their being. Yes, I am fully aware that Daphne Maxwell Reid as Aunt Viv tends to be dragged by a good number of hardcore Fresh Prince of Bel-Air fans because of how utterly reduced her character was, how passive she became, and how she was mostly delegated as the subdued housewife after her pregnancy with her youngest son, Nicholas “Nicky” Banks. While I do agree that Maxwell Reid’s Aunt Viv was not as urgent as she was in the previous seasons, due to the writers not knowing what do with Aunt Viv in the later seasons, Daphne Maxwell Reid still managed to portray the authoritative, take-charge, responsible side of Aunt Viv as a mother to her children and a wife to Uncle Phil. She even had her shining moments on Season 4’s “Papa’s got a Brand New Excuse”, which is my number one favourite episode of all time, and Season 5’s “It’s a Wonderful Lie”. The former had her directly giving Lou Smith, Will’s biological father who abandoned him fourteen years ago, an ultimatum stating that, should Lou abandon Will again, he should never return to either him or to them. The latter had her calmly and rationally admonishing her youngest daughter Ashley for her misdeeds of lying to the family about her supposedly going ice-skating but really partaking in a frat house party, kissing a college football linebacker, despite being a fifteen-year-old high-schooler, and for running away, thus ending in a tearfully remorseful Ashley being wrapped in Maxwell Reid’s Aunt Viv’s loving embrace, realising all the harm she has done to Carlton, Will, Hilary, Geoffrey, Aunt Viv, and Uncle Phil. Therefore, Daphne Maxwell Reid’s Aunt Viv is still a strong authority figure in the Banks family with sufficient backbone to make her children realise right from wrong. Izayoi would also fulfil those pre-requisites of being an authority figure who rules with unconditional love, compassion, respect, responsibility, and decorum, considering all the times she has been there for Inuyasha to nurture and protect him from harm. While I can easily compare Izayoi to Maxwell Reid’s Aunt Viv, she is also comparable to Viola “Vy” Smith, Will’s biological mother, portrayed by Vernee Watson-Johnson. Vy and Izayoi are indubitably nurturing, appreciative, loving, and protective to their own kin. Whether it is Vy being there for her sisters and her son or Izayoi being their for her son, no amount of trouble would ever destroy the unconditional love they have for their family. Izayoi and Maxwell Reid’s Aunt Viv do have a lot in common in terms of their own brands of motherly love and being strong authority figures in their families, but Izayoi also has a lot in common with Vy, for both of them are very appreciative, protective, and potent mothers who know what is best for their sons.

InuKimi’s and Izayoi’s motherhood skills would not only be of fantastic use to both Sesshoumaru and Inuyasha, but also their surrogate sons Shuran, Hakkaku, and Ginta and their surrogate daughters Ayame and Shunran. Both InuKimi and Izayoi would keep their children in line in such an effective manner that they would aid them in growing up to be the best versions of themselves. InuKimi’s approach to motherhood is centred on structure, respect, responsibility, and honesty. Izayoi’s revolves around kindness, compassion, understanding, and taking full responsibility of their own actions. The Wolf Elder and Toga would be just as grateful to have InuKimi and Izayoi in their lives because of how well they have kept the family together. Sesshoumaru and Inuyasha would not only grow up to be valiant warrior gentlemen with sufficient decorum, but Shuran, Hakkaku, and Ginta would be just as valiant and composed, and Ayame and Shunran would be just as independent and outspoken. Given that neither Ayame nor Shunran had any mother figure in their lives, both InuKimi and Izayoi would be catalysts in their lives growing from girlhood to womanhood. Ayame would learn from both mothers that she has what it takes to stand on her own two feet, taking on the world, and never giving up. Shunran would also learn that her strength is in her kindness, compassion, and attentiveness to her friends, her family, and everybody that she loves. Whatever method is implemented, both InuKimi and Izayoi are going to ensure that their family is safe, secure, and sound.

InuKimi and Izayoi are two sides of the same coin when it comes to motherhood and unconditional love for the family. Just like how Janet Hubert and Daphne Maxwell Reid are two different actresses embodying Aunt Viv, InuKimi and Izayoi follow in their footsteps as two mothers who share a common role in their family. From InuKimi being compared to Hubert’s independent, fierce, and outspoken career woman portrayal of Aunt Viv to Izayoi being akin to Maxwell Reid’s dignified, graceful, and logical mother figure portrayal of Aunt Viv, these two mothers have their ways of keeping a family together.

I hope you all enjoyed this, and I will see you in the next Inuvember submission. Take care, stay safe, and always remember to honour, love, and show a lot of appreciation for your mothers, everybody.

InuKimi and Izayoi from Inuyasha belong to Rumiko Takahashi and Sunrise. 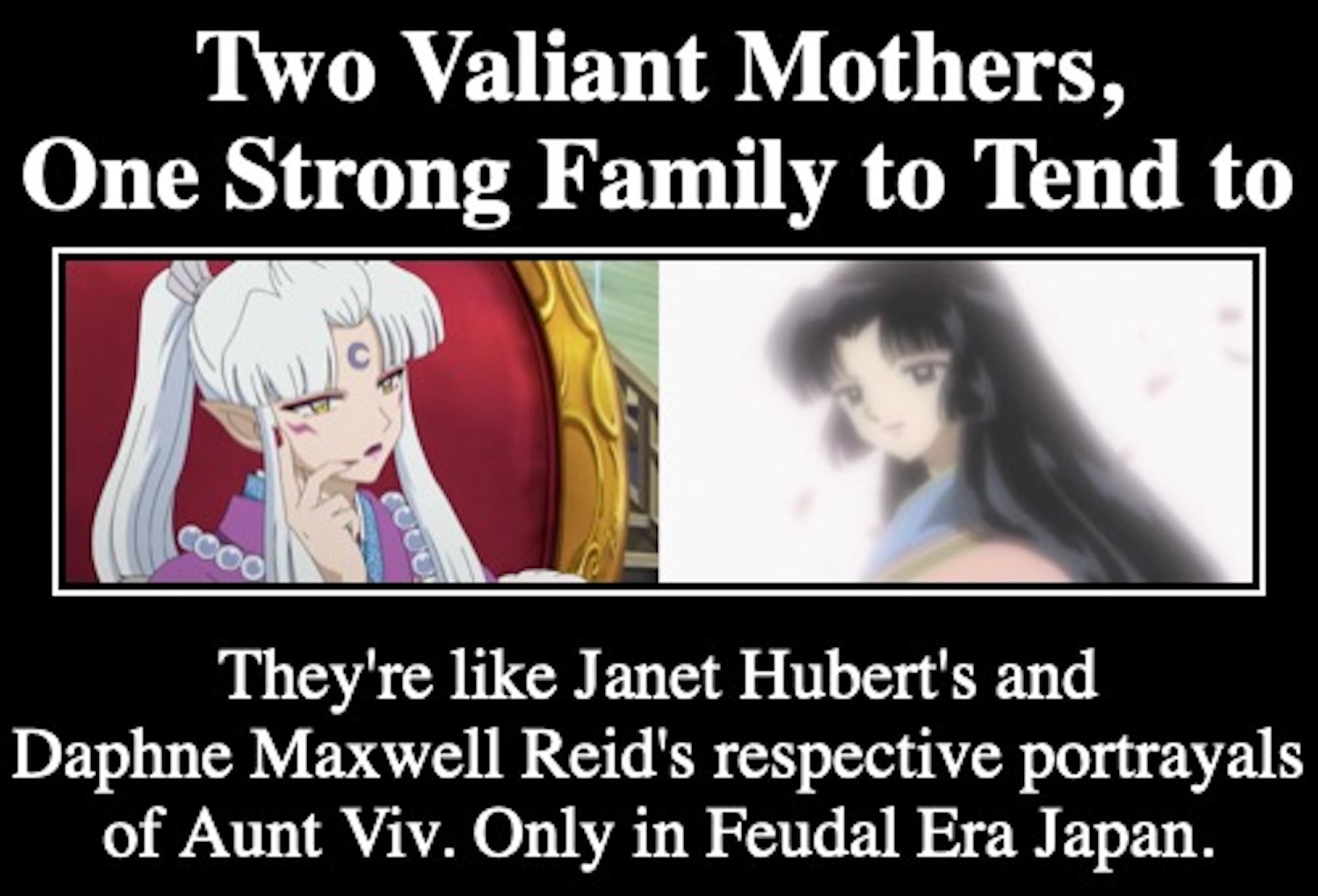