This motivational poster is super highly Pro-Wolf Elder, Pro-Toga, Pro-InuKimi, and Pro-Izayoi with some hints of Pro-Sesshoumaru, Pro-Inuyasha, Pro-Ayame, Pro-Shuran, Pro-Hakkaku, Pro-Ginta, and Pro-Shunran. This is also my entry for this year’s Red Ribbon Reviewers’ submissions as well as this year’s Inuvember and my personal dedication to all the heroes, both in the military and our families at home, for this year’s Veterans’ Day.

Yesterday, I mentioned that The Panther King, although he is a formidably awesome villain, is a terribly atrocious father figure to Toran, Shuran, Karan, and Shunran aka The Panther Devas. Therefore, instead of him raising The Panther Devas, especially Shuran and Shunran, The Wolf Elder, Toga, InuKimi, and Izayoi shall gladly step in and raise them, aside from having their hands full with Sesshoumaru, Inuyasha, and Ayame. Having Hakkaku and Ginta along as the surrogate sons complete this tight-knit family established by a wise old wolf yokai, a mightily valorous dog yokai general, a calculating yet elegant dog yokai noblewoman, and a warm-hearted, sweet human noblewoman. Therefore, these phenomenal four parental figures have done an exceptional job in raising their progeny to be the best they can be.

Although The Wolf Elder is Ayame’s grandfather, he could very well be just as much of a grandfather towards Inuyasha because of how much resilience, strength, and courage he has, thus affirming that he is very good for Ayame. He could also extend that loving wisdom to Sesshoumaru, Shuran, Hakkaku, Ginta, and Shunran, as he also considers them to be his grandchildren. The Wolf Elder has always believed in Inuyasha and Ayame, for they have proven themselves to be strong warriors who will continue their equally potent bloodline while not permitting anybody to get them down. By imbuing them with wisdom, courage, and respect, he has definitely given them a lot of direction in their lives growing up.

Toga the Dog General can definitely give Cliff Huxtable, Philip Banks, and Carl Winslow a run for their money when it comes to how greatly he has raised Sesshoumaru, Shuran, Inuyasha, Hakkaku, Ginta, Ayame, and Shunran. He not only sees courageous, potent, and resilient warriors in each of them but also a lot of valour, good character, and brilliance in their overall beings. He also wants what is truly best for them while giving them as much love, structure, and perseverance in their lives. Furthermore, being a general also means that he uses his military tactics to ensure that his children do not get themselves into any danger let alone harm. His strictness as an authority figure is coupled with how much he wants to make sure that Sesshoumaru, Inuyasha, Ayame, Shuran, Hakkaku, Ginta, and Shunran do not find themselves on the wrong side of the road, thus doing his very best to help them reach their fullest potential in life.

InuKimi and Izayoi may seem like Janet Hubert and Daphne Maxwell-Reid in terms of seeing two varying portrayals of Vivian “Aunt Viv” Banks, specifically the take-charge, well-rounded, potent, valiant career woman in Hubert’s Aunt Viv as embodied by InuKimi and the more subdued yet utterly dignified, poised, direct, appreciative mother as embodied by Izayoi, but these two fine noblewomen are loving mothers through and through. Both InuKimi and Izayoi eschew any and every notion of them being relegated to housewives because of how effectively they can balance their careers as political women and their roles as wives to Toga as well as mothers to Sesshoumaru, Inuyasha, Ayame, Shuran, Hakkaku, Ginta, and Shunran. Furthermore, these ladies would never run out on their husband or on their children because of how much they mean the entire world to them. Should anything happen to their family, they would be utterly devastated, for they will always fight for their surrogate father, their husband, and, most importantly, all of their children. To them, it does not matter if it is their respective sons Sesshoumaru and Inuyasha, their surrogate sons Shuran, Hakkaku, and Ginta or their surrogate daughters Ayame and Shunran, they are all their children, and they want the best for them.

There is not a shadow of a doubt that Sesshoumaru, Shuran, Inuyasha, Hakkaku, and Ginta would grow from headstrong young men to valorous, strong, fierce men who will never back down from a fight and that Ayame and Shunran would grow from vivacious young women to self-sacrificing, compassionate, courageous women with the world at their feet. The Wolf Elder’s, Toga’s, InuKimi’s, and Izayoi’s superb parenting skills would also have a strong effect on Shuran’s and Shunran’s biological sisters Toran and Karan, Sesshoumaru’s human friendly rival Kuranosuke Takeda, Inuyasha’s, Hakkaku’s, and Ginta’s frenemy Hiten, and Ayame’s human friend Ayumi because of how much they have helped them grow as individuals while considering them as part of the family. Sesshoumaru, Inuyasha, Ayame, Shuran, Hakkaku, Ginta, and Shunran would no doubt pass down their familial togetherness to their own children, thus uniting them under one roof. The fact that the familial love provided by The Wolf Elder, Toga, InuKimi, and Izayoi is not only passed down to their children but also their friends and grandchildren is proof positive that everybody is family.

The Wolf Elder, Toga, InuKimi, and Izayoi have done excellent jobs in raising their children from impetuous youths to valorous adults with families of their own. Sesshoumaru, Inuyasha, Ayame, Shuran, Hakkaku, Ginta, and Shunran owe a great deal of gratitude to their grandfather, their father, and mothers for raising them to be great versions of themselves, thus displaying strength in numbers throughout the family.

I hope you all enjoyed this, and.I will see you in the next submission. Take care, stay safe, and remember to show gratitude to your parents and grandparents for raising you to be the best versions of yourselves this Veteran’s Day, everybody.

The Wolf Elder, Toga, InuKimi, and Izayoi from Inuyasha belong to Rumiko Takahashi and Sunrise. 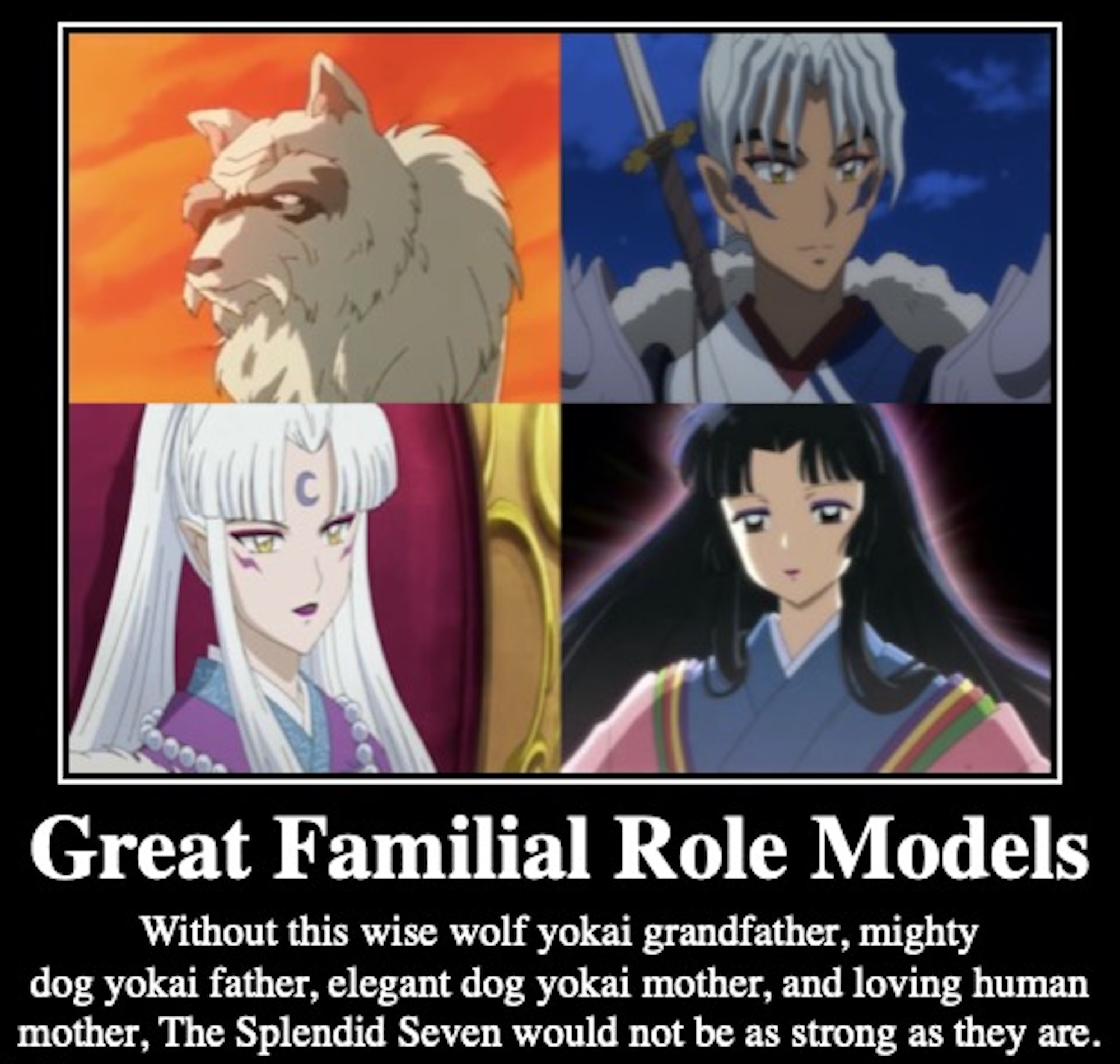