Throughout my tenure as a pre-adolescent to teenager from Grade 5 to Grade 12, specifically from 11 to 18 years old, I have always looked up to Sesshoumaru and Inuyasha because of how strong, tough, and determined they were. Along came Ayame who definitely proved herself to be a strong, independent, headstrong warrior queen who I always believed had hidden depths that the show did not unearth just because she was an anime-only character. Mind you, I have acknowledged her presence when I was a 14-year-old eighth-grader approaching my first year of high school. Before my second year of high school and after I turned 16 years old, Shuran, Hakkaku, Ginta, and Shunran pleasantly surprised me in more ways than one because of how fun, valorous, and interesting they really were had the show featured them on the forefront more often. Together, these seven yokai warriors have become my role models for life because of how strong, fierce, determined, courageous, headstrong, goal-oriented, and ambitious they were in their own special ways. It is often said that role models in the media can come in different places. When it came to Inuyasha, an anime I continue to have a strong love-hate relationship with, these seven were not only characters I loved and enjoyed but whose personalities I believed had great potential to keep on shining. It also helped that, when Inuyasha first aired in Japan in the year 2000, these seven yokai warriors were teenagers during my consistent viewing of them during my adolescent years, with Sesshoumaru being 19, Inuyasha approaching 18, Ayame being 15, Shuran being 18, Hakkaku being 17, Ginta approaching 17, and Shunran being 13, thus emitting a higher sense of relatability throughout my turbulent teenage years in everything I have endured from my academics to shaping my career to experimenting with my passions.

Sesshoumaru’s focus, Inuyasha’s stamina, Ayame’s determination, Shuran’s strength, Hakkaku’s loyalty, Ginta’s craftiness, and Shunran’s optimism have helped me reflect on what I can be as a person and more. They all embodied how imperative of a role perseverance, valour, and tenacity play in my life growing up. Whether it is Sesshoumaru and Inuyasha growing as warriors with the usage of their respective swords and claws, Ayame’s relentlessness to keep true to her dreams, Shuran’s unbreakable physical strength battling against the pitiful excuse of a warrior who does not need to be named here, Hakkaku’s and Ginta’s brotherly love and deep sense of loyalty or Shunran’s clever craftiness in terms of implementing her illusions to her advantage, I learned a whole lot from them and did what I could to implement what positively encouraging qualities they have into my life. To this day, I continue to admire Sesshoumaru, Inuyasha, Ayame, Shuran, Hakkaku, Ginta, and Shunran for the strength and valour they represent and how they use them in their own special ways.

Positive individual traits aside, I too have found myself rooting for them every time they were on screen. For better or for worse, I always knew they deserved better. Sesshoumaru and Inuyasha deserve to look beyond their sibling rivalry and realise that they can be strong together, they are never alone, and they can have friends and family who will consistently encourage them to be the best versions of themselves, despite what they think on the outside. Ayame certainly deserves a lot more encouragement as a steadfast, courageous, and fierce heroine who keeps true to her code and does not let anybody dissuade her from being a strong warrior queen with a lot of heart to those who need her undying care, thus asserting that she is not a prize to be won but a woman with her own mind and her own soul, as well as realising that there are other stronger, braver, and more earnest suitors, like Inuyasha, in her life than the one she thought she should be with. (I am looking at you, loser wolf yokai who must never be named ever again). Shuran and Shunran may be happy with their sisters, eldest sister Toran and third-born Karan, because they are family by blood, but even they need more familial love in their lives and recognise that they are always welcome as a family, especially where Sesshoumaru, Inuyasha, Hakkaku, Ginta, and Ayame are concerned. Speaking of Hakkaku and Ginta, these two wolf brothers definitely deserve better friends/family members/comrades because they need the best sides of them to be shown more often, and they do not need to be yes men, thus legitimising their human right to speak their minds and express their true selves. Therefore, I never tuned in to Inuyasha to see overwrought love triangles, annoying sit commands being thrown at Inuyasha, and/or Karma Houdinis who barely receive any comeuppance. I tune into Inuyasha to see Sesshoumaru, Inuyasha, Ayame, Shuran, Hakkaku, Ginta, and Shunran shine like the brightest of stars.

When it comes to these seven brave yokai warriors, I can never go wrong with them as my role models for life. I have looked up to them when I was a tween and teenager, and I am still happy to know that they have continued to hold up so well. 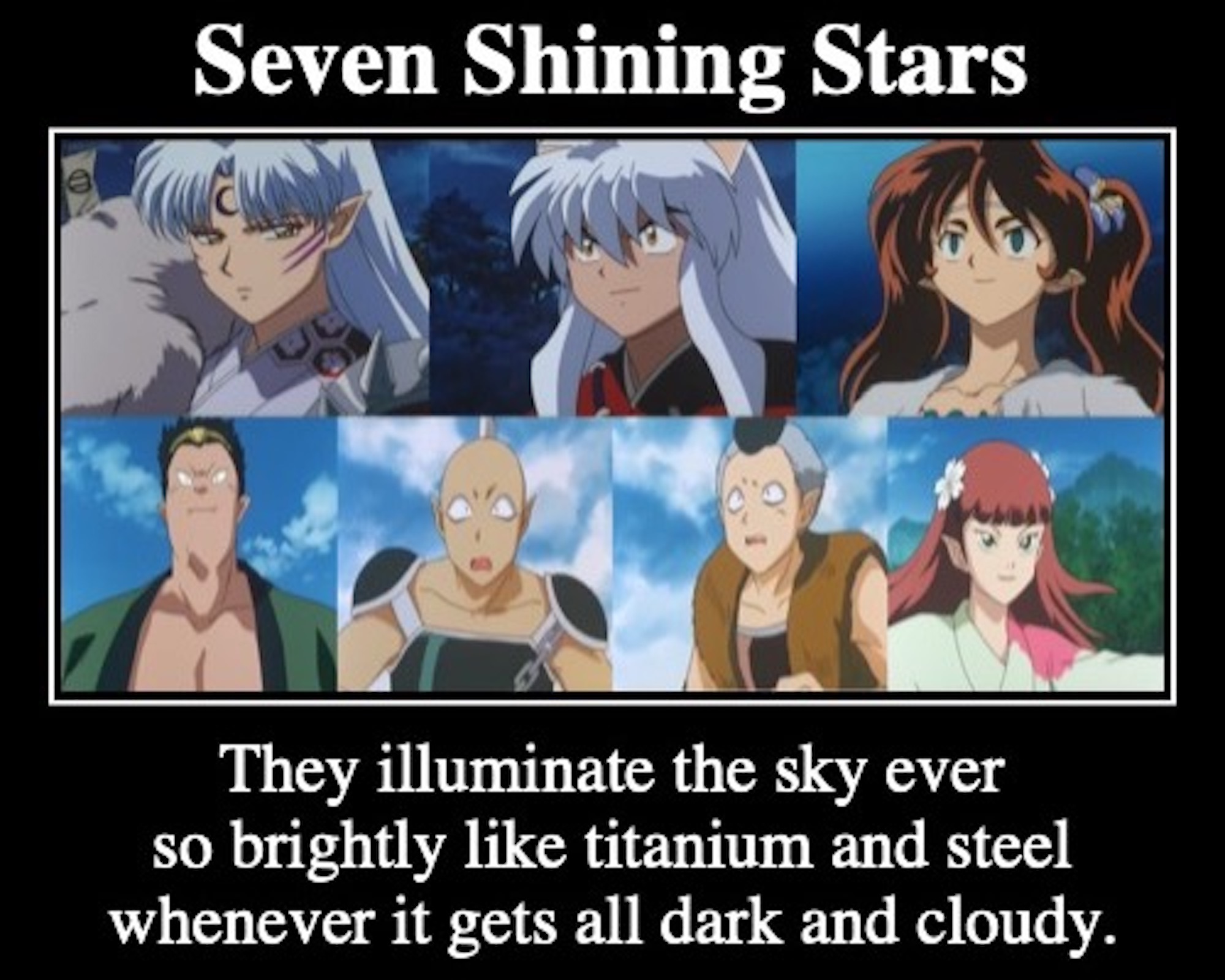