The Strongest Family of Seven

What happens when you combine two strong dog yokai warrior gentlemen, three wolf yokai warriors with one being a queen among the two princes, and two panther yokai warriors who may be vastly different in size but united by blood? You obtain a super powerful family of seven who may be different but are united in courage, valour, stamina, and perseverance. Sesshoumaru and Inuyasha are truly fortunate to have a brave, beautiful, and potent warrior queen like Ayame, really great guy friends and brothers from other mothers like Shuran, Hakkaku, and Ginta, and a little sister from another mother like Shunran in their lives, thus solidifying an amazing unit that can rival any family, tribe, and/or clan. Overlooking their collectively awesome physical strength, peerless combat prowess, and the heaps of stamina, determination, and endurance they have in battle, these seven yokai warriors have a familial closeness which can keep them together forever and help them grow as individuals as well as a family.

Trust me when I say that Sesshoumaru, Shuran, Inuyasha, Hakkaku, Ginta, Ayame, and Shunran as a family, known in my AU head canon as The Splendid Seven, can put The Cosby Show’s Huxtables, The Fresh Prince of Bel Air’s Banks, Diff’rent Strokes’ Drummonds, One Day at a Time’s Coopers, Family Matters’ Winslows, and many other television sitcom families to absolute shame. The Huxtables, The Banks, and The Drummonds may be affluent, especially considering that the Huxtables and the Banks are television’s finest examples of Black American excellence, familial closeness, and aspirational role models galore. I am also certain that other television sitcom families have their own brands of closeness and togetherness, for better or for worse. However, anything these families can do, The Splendid Seven could either surpass them or even learn from them and, therefore, be in a class of their own, thus garnering every sitcom family’s approval of respect. Whether it is Sesshoumaru and Inuyasha as brothers accepting Shuran, Hakkaku, Ginta, Ayame, and Shunran as part of their family, Sesshoumaru being an aloof and tough older brother figure to Shuran and Hakkaku, Inuyasha being the rowdy yet caring older brother figure to Ginta, Ayame being the lovingly supportive older sister figure to Shunran, Sesshoumaru acknowledging Ayame as a strong individual, Shuran and Hakkaku being lovingly encouraging to Shunran, Inuyasha and Ayame loving each other unconditionally, and Ginta and Shunran loving each other in harmony, there is no shadow of a doubt that they can stick together through thick and thin, despite the turbulence and the trials. This unity and interpersonal strength could even be passed down to their children, including Kohaku, Kai, Souta, Rin, Shiori, Kanna, and Shinta, for they aspire to be just as strong, brave, and determined as their seven role models.

I also lovingly compared The Splendid Seven to the likes of the Justice League, the X-Men, and the Avengers, with that comparison continuing to hold up well. Their strength is not only greatly considered, but it is also how wonderfully Sesshoumaru, Inuyasha, Ayame, Shuran, Hakkaku, Ginta, and Shunran could join forces and find strength in numbers. Sesshoumaru has the stealth and smarts to rival those of Batman’s, Professor X’s, and Ironman’s. Inuyasha’s super strength can make Superman, Beast, and Thor absolutely jealous. Ayame’s brand of stamina and valour are sufficient to make Wonder Woman, Jean Grey, and Captain America salute her. Shuran has the strength and ferocity to make Martian Manhunter, Wolverine, and the Hulk want to compete with him. Hakkaku can be just as determined as The Green Lantern, Gambit, and Hawkeye. Ginta’s speed is a flash of brilliance in The Flash’s, Cyclops’, and Falcon’s eyes. Shunran’s craftiness and vivacity can be laudably praised by Hawkgirl, Rogue, and Black Widow. Therefore, these super yokai are strong both physically and mentally. Nothing can ever stop them dead in their tracks. Whatever the Splendid Seven’s enemies have to offer, they will boot them quickly and easily.

Aside from Sesshoumaru, Inuyasha, Ayame, Shuran, Hakkaku, Ginta, and Shunran being a super strong family who can stick together while kicking demon butt, one can never forget that these seven yokai were teenagers during the period Inuyasha debuted back in 2000, with Sesshoumaru being 19, Inuyasha being between 17 and 18, Ayame being 15, Shuran being between 18 and 19, Hakkaku being 17, Ginta being between 16 and 17, and Shunran being 13. Therefore, these seven yokai warriors were teenagers who were volatile, unpredictable, yet indubitably headstrong individuals who always know what they want while appropriating what grown-ups do, thus adapting to certain new situations. Even with all the strength, speed, stamina, and endurance Sesshoumaru, Inuyasha, Ayame, Shuran, Hakkaku, Ginta, and Shunran have, they were young individuals doing their absolute best to survive in a ruthless world. In fact, they could give the casts of A Different World, Felicity, Buffy the Vampire Slayer, My So-Called Life, and Freaks and Geeks a run for their money because of how formidably versatile Sesshoumaru, Inuyasha, Ayame, Shuran, Hakkaku, Ginta, and Shunran can be. Sesshoumaru, Inuyasha, Ayame, Shuran, Hakkaku, Ginta, and Shunran would grow from volatile teenagers to independent young adults to fully driven and responsible adults who have shaped their children and grandchildren to be the warriors they ought to be. These days, The Splendid Seven would be full-fledged adults, with Sesshoumaru at 40, Inuyasha approaching 39, Ayame at 36, Shuran at 39, Hakkaku at 38, Ginta approaching 38, and Shunran at 34, thus growing from being impassioned youths to older, wiser adults.

Sesshoumaru, Inuyasha, Ayame, Shuran, Hakkaku, Ginta, and Shunran may be mighty in their own special ways complete with all the strength to move mountains, but their true strength is in being a familial unit based on valour, courage, and perseverance. Whatever obstacle they face either individually or together, they can always put a brave face on to face each and every one of them.

I hope you all enjoyed this, and I will see you in the next Inuvember submission. Take care, stay safe, and remember that blood is not always thicker than water, but what you make of your family and the people you love is most important, everybody. 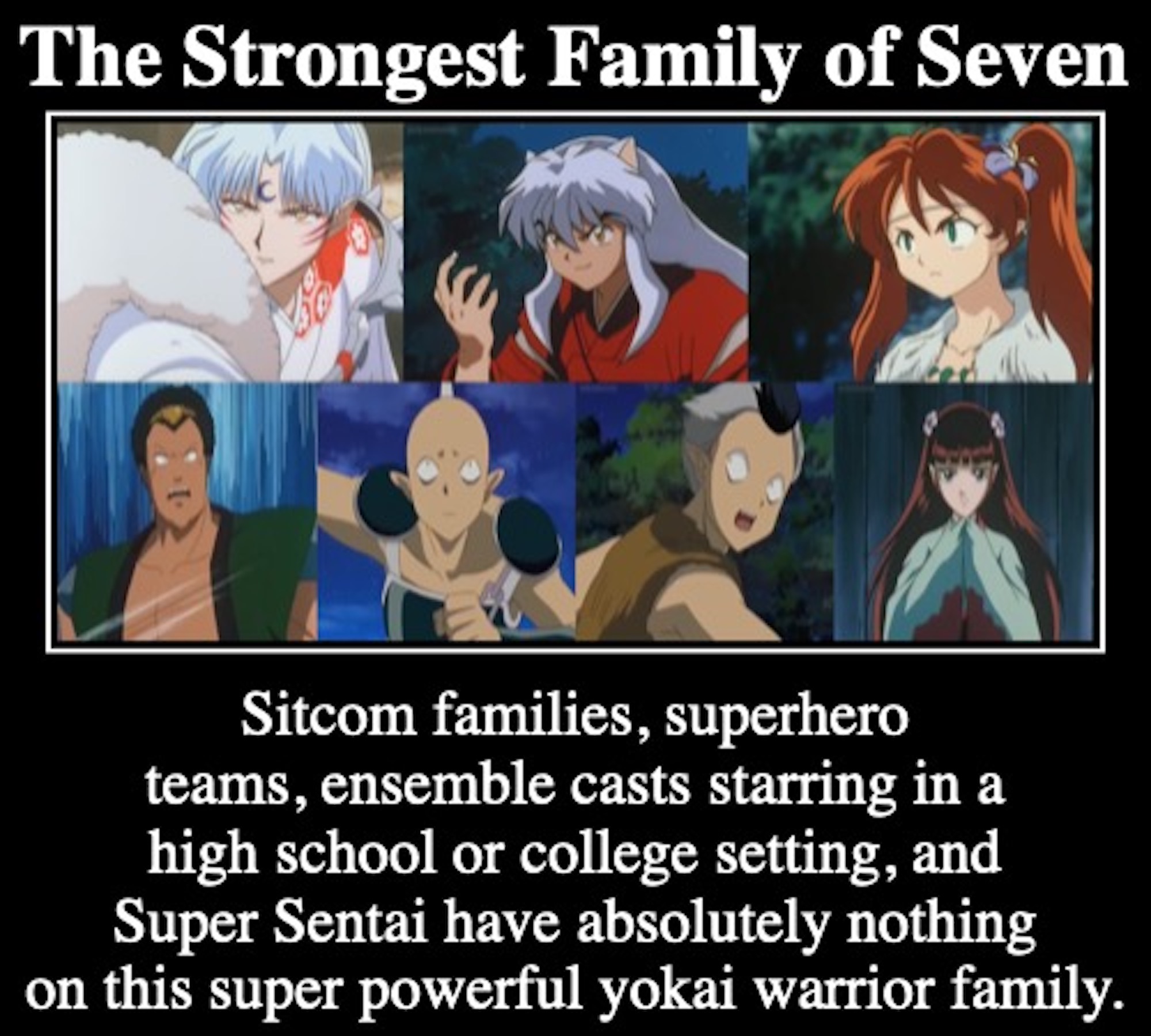