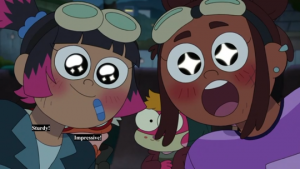 This past weekend saw something exciting as two Disney Channel shows introduced us to three new LGTBQ+ characters.  Something that I liked about all three of them is how casually they were treated.  Let’s start with our couple from Amphibia.

I give you Jess and Ally,  they appeared in the first segment of this week’s episode Fixing Frobo when Polly uses the show’s version of YouTube to lookup information on robotics and comes across their internet show, “Just two Girlfriends who REALLY Love Robots!”  It’s a fun and funny moment with perhaps one of the best gags of the episode being this panda robot that is constantly on fire. 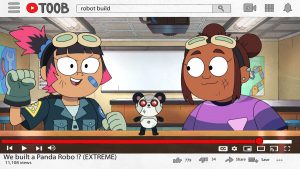 This is something small but I appreciate the fact that we have an already established couple that was introduced.  We also have a bi/pan couple here as Jess is bisexual and Ally is pansexual.  Now, I’ve not touched upon what pan is before and part of that is but I don’t fully understand what that means but according to this Rolling Stone

someone who is attracted – either emotionally, physically, or both – to all genders. This includes cisgender, transgender, agender, and gender-nonconforming individuals. The prefix was chosen because it comes from the Greek root “pan,” meaning “all.” 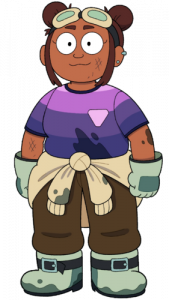 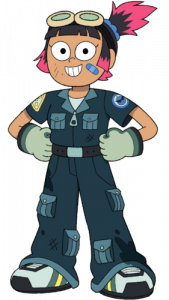 I  love this as it’s such as nice touch.  Now I haven’t talked about them too much as characters but that’s because I wanted to talk about this first and well, they are two big dorks.  Which knowing my LGBTQ friends and me, yeah that checks out.   They’re two dorks that love one another and want to protect their new friend as they even show up at the end of the episode to make sure that Polly is okay after she starts Polly inside a garage.  Now,  this does lead to an interesting thought.  It’s often been stated that there need to be more girls studying STEM and there has been a stronger push for that going so far as the Girl Scouts introducing it as a merit badge a few years ago.  But what about the LGBTQ community and STEM.   This may not be something that one would think about at first but when you see a wlw couple that is into robotics, it comes to mind.  When researching the cross path of LGBTQ and STEM, this quote popped up is rather interesting.

Science prides itself on being apolitical, gender-neutral, and color-blind—open to all, focused only on finding truth. Many find these ideals of scientific inquiry refreshingly dispassionate. But these same ideals can also, paradoxically, stifle discussion of sexual identity, leading many gender and sexual minorities to feel unwelcome, or at least unsure, in science.

This article is a neat read as it shows how many people that aren’t straight or white feel of those who have been pushed out of the science field.  I know this might be depressing to bring up in a blog about a cartoon couple but I feel as though Jess and Ally’s presence and being into robotics is important as it shows that both girls and LGTBQ couples can find a place in STEM and STEM can be fun and cool.  It brings to mind how Tulip in the first season of Infinity Train was a math and computer nerd. 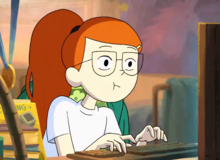 So,  that’s neat and I did enjoy seeing that.  While I’m not very good with STEM myself,  I do hope that seeing characters like these two inspire the next generation.   I have a feeling that we might be seeing more of these characters in the rest of the season and I do hope so of their first outing was pretty great.   I’ll probably have another entry sometime this week.