Enjoy this old Halloween cross over 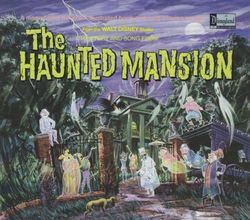 Moviefan12: Welcome back foolish mortals, it is time to share a story with you as The Creature joins me once again as we look at an LP release that was released in 1969 to coincide with the opening of The Haunted Mansion.  Join us as we look at The Story and Song From The Haunted Mansion.    For those that remember the Read-Along Storybooks from the ’90s, this was the predecessor to those. 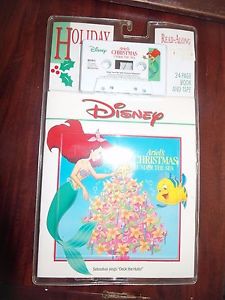 This too featured a storybook with illustrations that were done by Collin Campbell that would bring The Mansion to eerie life in a child’s home. 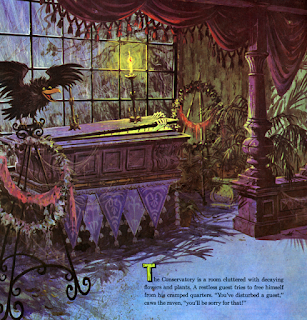 Of course, Campbell knew a thing or two about the Manor as he was one of the Imagineers that helped to bring The Haunted Mansion to life. And speaking of, there are ideas that are presented in this story that either never found their way into the Mansion or it took a while for them to appear.   So, Creature, what say you, are you ready to give this frightful tale a listen?

TC: I had heard of the Read-Along Storybooks from Disney, but I had no idea they released one for the Haunted Mansion. So, I am definitely eager to hear this.

Moviefan12: The plot of this story is admittedly so thin that you could see a skeleton through it. It is a dark and stormy night and two teenagers named Mike and Karen come across The Haunted Mansion and decide to take shelter in it and they soon meet the Ghost Host and are led on a tour of the Mansion until they find their way out. What makes this work however is the presentation as the listener feels as though they are going on the tour of the Mansion with these two teenagers. And there are some rather standout moments such as the mention of The Hatbox Ghost in the Attic 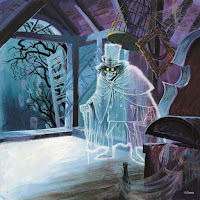 Now dear Creature, were there any moments that especially jumped out at you?

TC: I would probably have to go with the Graveyard. It was a very descriptive account of what you would end up seeing on the ride which would be a nice detail for anyone that hasn’t been on the ride. 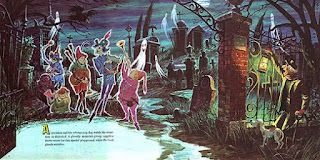 Now, let’s move on to what I consider the highlight of this spooky tale, the narration.

Moviefan12: Yes, dear readers, this spooky tale of The Haunted Mansion by the same man that told us why, you wouldn’t want to touch The Grinch with a 10-foot pole.  Ravenscroft’s voice is no stranger to the Disney Parks as he was also heard in The Enchanted Tiki Room and the now-defunct Adventures Thru Inner Space among many other attractions.  And his voice can even be heard at The Mansion as he was the voice of the lead Singing Bust. 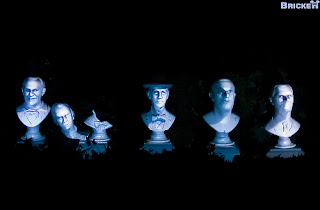 A common misconception that many people have is that they assume that Thurl is the voice of Ghost Host. I do not know how that misconception has started but it’s stuck.  Now, let’s move on to his performance in this audio story, he was excellent. He put such vivid detail into the descriptions of everything that one would see in The Mansion.  Making the listener feel as though, they were going through the Mansion with every little detail that he went into. He brought it to such eerie life that even without Campbell’s illustrations,  you can see the rooms perfectly in your head.

TC: Thurl does a great job serving as the narrator. His deep voice is perfect for the story and he does capture the feeling of the illustrations perfectly.

Characters
Mike voiced by Ron Howard
Moviefan12: Our two teenage characters are voiced by two young stars that would make their names later in life as Mike is played by Richie Cunningham or perhaps better known to today’s audience, the award-winning director for films such as Apollo 13. Yes, we have a young Ron Howard in the role of Mike, and judging by his voice, this was clearly after The Andy Griffith Show and Howard is quite likable in the role of Mike and it was stated in multiple sources that he played this role before Happy Days and that somewhat shows in Howard’s voice. On the surface, there isn’t much to the character of Mike and that will also be true of Karen but Howard makes the character work.  And this is perhaps more interesting for the novelty of hearing an early voice role of one of America’s best directors.

TC: I was actually a bit surprised that Ron Howard was on here. Regardless of the fact that the two main characters don’t have much of a personality to them, he still gave the character some life to him and it does, as you said, add to the novelty of the record.

Moviefan12: As my associate pointed out, there isn’t much on the surface to our two main characters on the surface but Robie Lester apparently made a career out of being the voice for the Disneyland Storyteller readers such as this one and others such as Peter Cottontail and it came to the point, where she would narrate and act out all the parts.  If anyone of you have ever listened to a Disneyland reader, you heard Lester say this phrase.

Her work on the storyteller albums even earned her a Grammy nomination.  But even if you never listened to any of the Disneyland Readers, there is someone else that you may have heard her lovely voice as she was the voice of Miss Jessica in Rankin-Bass’ Santa Claus Is Comin’ To Town. 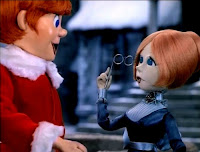 Again, this is quite the novelty and for what this performance is meant to be, Lester turns in a serviceable performance and it is quite interesting to hear this voice from such a beloved voice actress elsewhere.

TC: I never knew she made a career out of narrating these stories. Her character reminded me a bit of B-Movie Actresses who are often easily frightened at the current situation (like Janet Weiss from Rocky Horror). Nevertheless, she also gave the character some life to it.

Moviefan12:  What is that dear reader, you were expecting Paul Frees.  Well no, he wasn’t the voice as instead, we have Pete Renaday in the role and you see, he was an early choice to play Ghost Host and it’s not hard to see why as next to Ravenscroft, he is the best part as Renaday makes the Ghost Host quite eerie and creepy as you never know, if you can trust him or not.  He plays him as someone that you aren’t sure that what his motives are.  There seems to be something more sinister at foot with Renaday’s Ghost Host. And just as Lester was known for other voice roles for various attractions at Disney Parks but perhaps is best-known role is that of Master Splinter from the 1987 Ninja Turtles.

Clearly, this is a very different role than Hamato Yoshi as the Ghost Host is quite creepy and very eerie. Because you never know, what he’s going to do next.  I would not call him a villain, dear reader but he does come mighty close as you hear how he makes our two teenage protagonists quiver in fear.

TC: He doesn’t seem much of a villain but more of a foreboding guide throughout the house. While he may be no Paul Frees (or Vincent Price) he still gave it his best and gave it some ghoulish delight.


Moviefan12: Dear reader, I would say that you are wise to go in not expecting too much from this.  As it is perhaps best, just to take this for the sheer novelty that it is.  Does that make it bad? No, but there isn’t a whole of life to the story of this LP, it is the cast that brings it to life.

TC: I agree with you. There really is not much to this and I found it to be a bit dull. The acting did liven the story a little bit although there’s not much else to really say about it. It’s definitely something that is more of a One-Time Listen.

Tags: A Look at Disney The Haunted Mansion