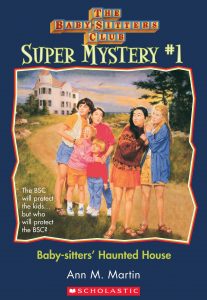 Thanks to the Netflix series,  I have become a fan of The Baby-Sitters Club. Seriously, that show is so good.  I enjoy that show.  The show led me to seek out various books and I am quite fond of the graphic novels.  Another spin-off series that I enjoy is the mysteries well albeit the Super Mysteries.  These books feature every member of the BSC as they attempt to solve a mystery.  Now besides Haunted House, which I’m looking at tonight, I have read two other titles in the Super Mysteries series, Baby-Siters’ Christmas Chiller and Baby-Sitter’s Fright Night. The latter of which I enjoyed quite a bit as it took place in Salem. 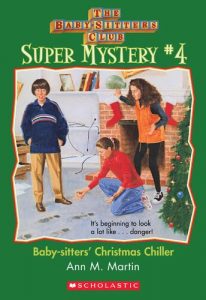 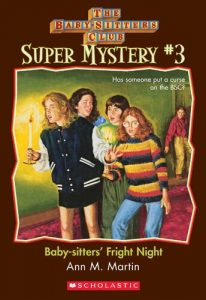 These books are quite good and such a fun way to introduce young readers to mysteries with characters they already know and like.  Plus, it is fun to see the girls of the BSC taken out of Stoneybrook.

Something interesting that caught my attention right away with this book is its setting as it takes place in a small town in Maine. I bring this up because Maine seems like a popular place to set these types of stories and that in large part I believe comes from Stephen King. 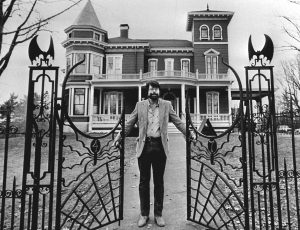 Now for obvious reasons, a BSC book doesn’t have the same vibe as a book by Stephen King but it is still an interesting thing to notice. It does admittedly take a while for the story to get going as well, it still focuses on the babysitting aspect but the girls are hired to babysit a large family in a small town in Maine while on summer vacation.  The house is supposedly haunted and the story is rather interesting and you easily get the sense that it unsettles the girls. This is especially true when the girls are told this story by the gardener Georgio. 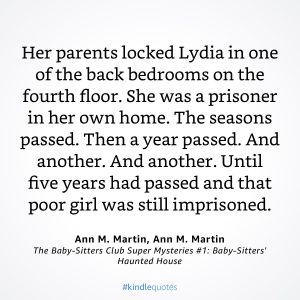 It’s a heartbreaking tale of how a man was turned down his love because Lydia’s family didn’t approve even after he had made something of himself.  And it is believed that this woman and her beloved have returned to haunt the house and look for a treasure.  Now, that isn’t the case as it’s just a couple but this elderly couple is doing their best to try and scare the BSC and their charges. It’s small but it works.  Some chapters pull away from Maine and the mystery aspect that doesn’t exactly work.  I get that it’s trying to balance the mystery aspect with a more lighthearted approach and out of the three BSC mystery books I’ve read, this is the most lighthearted.  And on one hand, I get that and it’s not bad but I did enjoy the unsettling nature that put the girls in danger.

A big turning point is in the girls finding a dumbwaiter in helping them to realize that the house isn’t truly haunted but it is an interesting idea that leads to the girls being uncomfortable and unsettled while they are in Maine for the duration of their trip.   I do enjoy that and as I’ve said, you get the sense that things could wrong at any moment.  Part of what helps in that regard is how each member of the BSC gets to narrate a chapter and that helps establish their takes on the hauntings.  Someone like Kristy is skeptical and wants to focus on the babysitting job they were hired to whereas someone like Mary Anne breaks down in fear at the idea of the haunting.

Something else I enjoy about this book is how while it is a bit cliche,  you know things get tense when a thunderstorm starts.  It helps to ramp up the sense of danger the girls are in.

I know the review is a bit shorter but there isn’t a whole lot to say but there are two other mystery books I could look at next Halloween that would fit better including one that is set around Halloween and one set in Salem, which I have previously read. 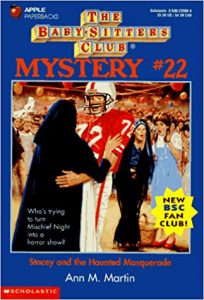 Still, it was a bit fun to do this short review for a book from a franchise that I’m a newer fan of.