This screenshot motivational poster is absolutely Pro-Sesshoumaru, Pro-Inuyasha, Pro-Ayame, Pro-SessAya in the loved pairing sense, and Pro-InuAya in the OTP sense. Sit back, relax, and revel how romance can be a strange thing in Ayame’s life which led her to have a crush on Sesshoumaru but realise that her sentiments towards Inuyasha are more unadulterated and more genuine than she could ever give herself credit for.

Dear readers, fans of Inuyasha, and people who have enjoyed Inuyasha when they were young but would have loved more development where characters like Ayame are concerned, romantic love is an unusual thing in life. It comes in different shapes and sizes, but I contend that there are types of romantic love that I am sure a lot of us who have been in a relationship. You may disagree with me all you want, but that is just my perception of what romantic love can be. The first form of romantic love commences with a crush. You initially feel like you are on cloud nine when you see that person. When you finally interact with that person, there will be occasions where you feel like it is the greatest event you have partaken in. However, time can be cruel, people change, and you realise that the spark which was present is unfortunately non-existent, despite the very good times you had together, thus making this end in unrequited love. The second form of romantic love is unconditional love. This love is total, pure, and requires self-sacrifice and a 50/50 balance from both parties. This is the love that aspires both life partners to be better for each other, warts and all. Unconditional love enables both partners to see each other for who they are, not what they want to be, thus challenging each others’ notions of themselves while bettering each other through thick and thin. Therefore, I contend that the love Ayame has for Sesshoumaru does start with a crush but ends as unrequited love, while Inuyasha’s and Ayame’s love for each other is absolutely unconditional and knows no bounds. Experiencing both sides of the romantic love coin offers different perspectives of what love can be.

Ayame’s love for Sesshoumaru would be based on trust, respect, allegiance, honour, and duty playing such an integral role in their relationship. She would indubitably help him realise that there is a lot more to his life than just his everlasting quest for power and would see a more awkward side to him. Awkward because, despite being a Daiyokai, Sesshoumaru might not have experience in finding himself in a romantic relationship with anybody, let alone Ayame, but he refuses to let his emotions show. Sure, Sesshoumaru is perceptive of Ayame’s skills as a courageous warrior princess, but Ayame is just as perceptive of Sesshoumaru being valiant, valorous, and determined on the outside but socially withdrawn on the inside. Therefore, Sesshoumaru can acknowledge how much respect Ayame gives him, and Ayame can help Sesshoumaru lighten up on some occasions. They seem to be accustomed to each other, but there are some reservations. Sesshoumaru would be aware that Ayame does feel stifled for not always expressing her true inner self and having to ritualistically abide with protocol. Although there seemed to be sparks flying between Sesshoumaru and Ayame in the romantic department, Ayame would accept that they both need to have time for themselves, thus separating amicably. It is neither Sesshoumaru’s style nor Ayame’s style to throw a tantrum about their relationship not functioning well, let alone vociferously blame each other, but this realisation would herald time for healing and recuperation for the both of them. Furthermore, Sesshoumaru would recognise that Ayame does need someone who truly understands her and will not treat her like a mere prize. In Sesshoumaru’s mind, should Ayame continue to remain with him, she would not have been privy to all the spectators’ and preceptors’ prying eyes and would have been doomed to live under a rigid set of otherwise arbitrary rules, thus not providing Ayame with the pursuit of happiness that she ought to live with.

Enter Inuyasha. Sesshoumaru would encourage Inuyasha and Ayame to coexist in a healthily romantic relationship, which they would do so with no regrets. This may have something to do with Sesshoumaru somewhat playing matchmaker in Inuyasha’s and Ayame’s love lives in a distant manner because he would not want to have his younger brother fall for a mortal girl, but it would signify how much Inuyasha and Ayame actually have in common. What would make Inuyasha and Ayame click is how strong they are as fighters and as individuals. Nothing could ever take them down even if they tried. Their romance would build up into knowing that they have something in common through virtues of their physical strength and stamina as well as their psychological determination to never be knocked down to developing into full-fledged trust, loyalty, compassion, and perseverance. Inuyasha and Ayame would learn to acknowledge each others’ good sides, bad sides, and ugly sides without ever flinching, thus demonstrating unconditional steadfastness amidst all insurmountable odds. In Inuyasha’s and Ayame’s romantic life, there is nobody else they can ever trust than each other.

Sesshoumaru might have given Ayame a taste of what love could be in an idealised fairy-tale sense, with Sesshoumaru being akin to a noble prince to Ayame’s dutiful yet independent princess, but even he would decree that Inuyasha is meant for her thanks to how much unconditional steadfastness, loyalty, and love there is between them. Therefore, Ayame’s love for Sesshoumaru may initiate as a crush, but it is ultimately puppy love, while the love that Inuyasha and Ayame have for each other is unconditional, pure, and absolutely untainted.

I hope you all enjoyed this, and I will see you in the next submission. Take care, stay safe, and never forget that romantic love may be tough, but it is quite interesting, everybody. 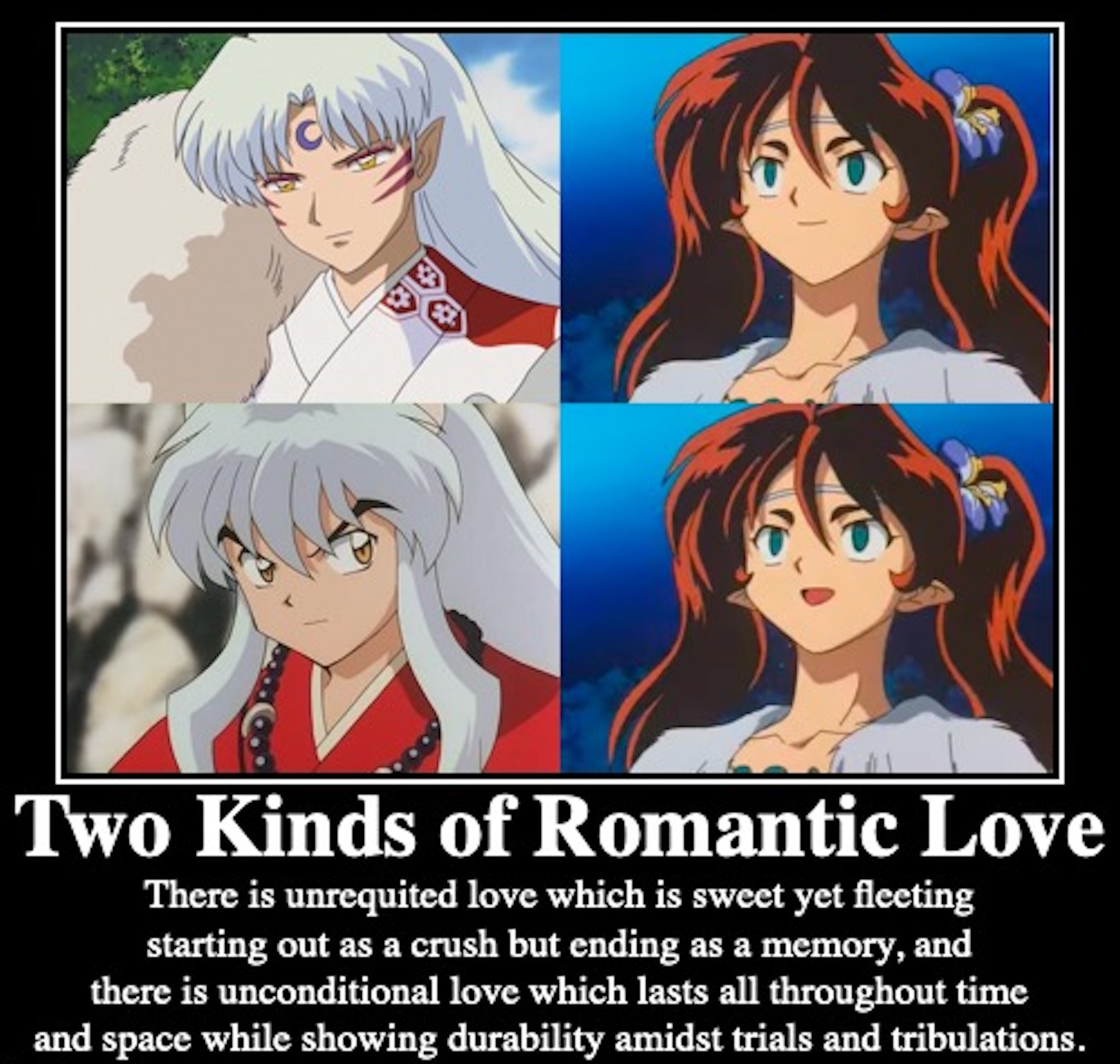