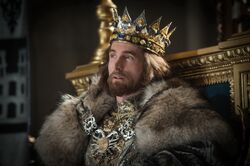 For the first time this year, I’ve decided to do two series of Villains Profile for Halloween. Every Monday, I’ll be posting a Villains Profile for the High School Musical franchise, and for the next three Tuesdays,  I’ll be looking at villains that fit a connective theme that is just too fun to pass up, Villain Movie Villains.  Pretty simple but the idea is Disney has now released three movies starring beloved villains, two being origin films and one a sequel.

The way, villains are handled in these villains movies are rather interesting as there are a few ways that this can be done, you can have a villain that is worse than the villain that is the lead of the film or you can use one of my favorite tropes, adaptional villainy.  This is when a story takes a character that wasn’t originally a villain and makes them a villain. The most famous example of this is perhaps The Wizard in Wicked. 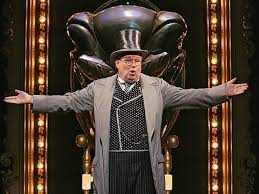 For something like this,  the story needs to choose a character that makes sense to be seen as a villain.  A perfect example is Peter Pan in the third season of Once Upon A Time. 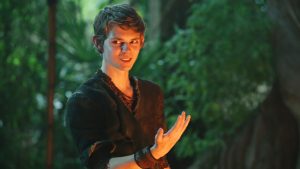 Whereas this film picked such a random character to make the villain, Aurora’s father, King Stefan to be the baddie.  It just makes you huh that this character that didn’t seem that memorable. 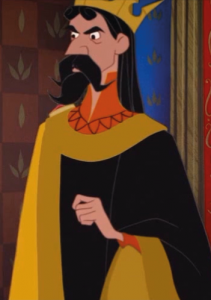 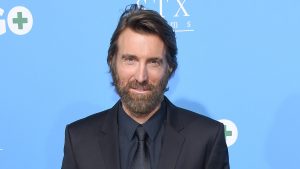 I’ll be honest and say that I don’t think I’ve seen anything Copley is in besides this.  Having said that, he works well in the film and does sell the deranged nature of the character quite well.

There are quite a few words that come to mind when looking at Stefan such as unhinged, deranged, and manipulative.  He’ll stop at nothing to get what he wants.  He wasn’t always this way as he used to be an honest man and was friends with Maleficent but came to hate her because of something that he did that changed their relationship greatly.  He at one point truly loved Maleficent but his actions caught up with him and that changed him considerably.

It’s also a sense of how power can corrupt as that is exactly what happened to Stefan.   Once he achieved the status of king, he became a vile person that was only driven by hatred and revenge. This is also true of Maleficent in this film as she too was driven by revenge for the action that Stefan took against his old friend.  The thing is that while Maleficent rightly blames Stefan, Stefan victim blames Maleficent for what he did to her in the belief that she wronged him.

We first see Stefan as a young child and it seems that he is friendly with Maleficent even to the point of loving her as they grow old.  He gives her what he says is true love’s kiss but it is not as it is nothing more than a lie.

This speaks to how at one time, Stefan was a good person but he was driven mad by power as it was all-consuming, and considering that he came from nothing, it does make a good bit of sense that he’d latch onto power and keep it any way possible.

I’m putting this before Grand Desire as this informs Stefan’s character for the rest of the movie and ties into what I mentioned with blaming the victim. To secure his spot as king, he is tasked with killing Maleficent.  He doesn’t go through with it but instead rips off her wings.  And the scene when she learns of it is one of pain and agony is gut-wrenching. 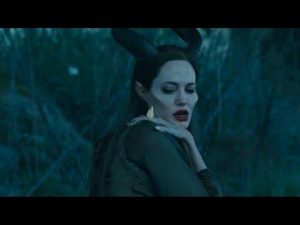 What he does is one of the darkest acts that any Disney villain has committed.  As Angelina Jolie has expressed when talking of this scene.

“We were very conscious, the writer and I, that it was a metaphor for rape,” Jolie said of the harrowing sequence, in which Maleficent’s wings are stolen as she’s in a drug-induced sleep. “This would be the thing that would make her lose sight.”

And it’s hard not to see that as Stefan drugs and touches her without her consent as he removes her wings. In performing this action,  he removed a part of Maleficent’s identity as we learn all fairies (yes, she’s a fairy in this movie) have wings.  Which in turn causes her to feel anguish and pain.  Think of it in this, when people are raped, it causes them to feel weak and as though they’ve been robbed of a part of who they were.  With this heinous act, Stefan drove Maleficent to the point of madness and that is what caused her to enact her revenge against the humans and why she cursed baby Aurora.  What she did was wrong but I can’t say I blame her after what Stefan did to her.  Stefan was someone she trusted and considered a friend and he used that trust against her to further his goals.  Which sadly is a reality for so many victims as noted here:

While this is focusing on children,  this does seem to apply to most victims.  This is the evilest deed any villain I have covered for this series has committed.

His first goal was to become king, which he achieved, and his second goal after Maleficent cursed his daughter was to kill Maleficent.  This is where he had started to go mad and there is even a scene where he is talking out his madness as though there is someone else in the room.

I believe that part of the paranoia eating at him is him trying to suppress the guilt for what he did to Maleficent to become king.  It seems as though he wants to justify his actions, he knows that it’s wrong but is pushing aside those thoughts because it helped him to become king and that is more important to him than how he hurt a friend. And killing Maleficent he may say that’s because of what she did to his daughter but he doesn’t love Aurora.  When she arrives a day before her sixteenth birthday, he has his daughter locked in a room after he shoves her out of the way.

Stefan’s demise is interesting as it involves him attacking Maleficent with a bunch of iron as that causes fairies to burn.  He takes his time and that is his downfall as it allows Maleficent to get her wings back.

I will admit, that is a cool look.  Maleficent is about to go in for a kill after she has taken out his guards but decides not to do.  But Stefan is so blinded by hatred that he still attempts to kill Maleficent and that is what causes him to fall to his death.  While Maleficent can fly away, Stefan is not and one could argue that she could have saved her but after what he to her, Nah.

I don’t know if I’ve said this of any other villain but he deserved to die.  The world is better off without scum like him in it.

Is King Stefan A Good Villain?

King Stefan is one of the darkest villains I’ve ever covered and he is one that I hate more than any other.  The hate I feel for him isn’t because he’s a bad character but more because he’s a bad person and that one act that he commits against Maleficent paints how I view him as a monster.  It’s a bit cliche to say that man is the real monster but that is very much the case with Stefan.  This speaks to how someone that was once a good person can be tainted by power and cross a line that they can never come back from.  He is an interesting example of adaptional villainy because like I said to go from the man in the animated movie that was a loving father to this monster is quite the leap.

These two characters may share the same name but they aren’t the same character and even though the movie presents itself as the true store of Sleeping Beauty, it helps to separate the two and look at this Stefan as his own character.  Join me next week as we look at the villain of this film’s sequel… 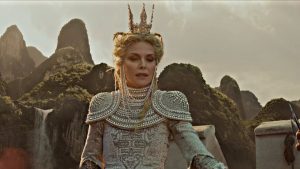