This I Ship Meme originally belongs to adamhatson and is dedicated to all of the wonderful Inuyasha x Ayame or InuAya shippers, partisans, and loyalists of the world. Sit back, relax, and soak in InuAya’s might, beauty, and courage.

Regardless of what canon had to dish out for Inuyasha and Ayame, regardless of the minuscule amount of times they have actually met in the anime, regardless if Inuyasha was the main manga/anime character and Ayame was an anime-only character, none of these factors are going to dissuade me from keeping these two canine yokai warrior lovers close to my heart and bring them together in my AU headcanon. Every single time I watch Inuyasha and Ayame, I always believed that these two deserved so much better life partners than the ones they had. Let’s face it, I do not want to further talk about that soot-haired, big bluffing, pathetic excuse of a wolf yokai who got away scot-free with murder, bragged about his own strength when he was actually powered by the Shikon Jewel shards, and claimed he was going to avenge his fallen comrades but did not do so because he was deprived of his precious jewel shards nor do I want to express further grievances on that shrieking harpy in a green schoolgirl outfit who unfairly sits Inuyasha because they are neither here nor there in my InuAya discourse nor in the AU headcanon I have for Inuyasha, Ayame, Sesshoumaru, Shuran, Hakkaku, Ginta, and Shunran. I would rather cherish the beauty that is InuAya and let their love flourish.

Inuyasha and Ayame are courage, strength, perseverance, determination, resilience, passion, and toughness incarnate. With Inuyasha’s super strength and well-toned muscles, Ayame’s speed and stamina, and their combined physical prowess which knows no bounds, they can overcome any trial that comes along their way and do it with a brave face. They would even pass these values down to their progeny, and they will also have genes as great as Inuyasha’s and Ayame’s. No doubt would their sons, Masataka, Masaya, Motomu, Kenta, Keita, Kouta, Kuma, Kazuhiko, and Kaito, have Inuyasha’s muscular strength and their daughters, Momoko, Makoto, Mikoto, Maya, Minako, and Meika, have Ayame’s resilient stamina. Inuyasha’s and Ayame’s love for each other and the family they have built together are built like the most formidable of tanks that no enemy can ever conquer them.

Intimacy, unconditional love, the will to be honest with each other, seeing each others’ good, bad, and ugly sides without flinching, and challenging each other to grow are Inuyasha’s and Ayame’s most notable traits. There is not a boring night for these two canine yokai warrior lovers, as their nights would be filled with spice, elation, and erotic pleasure. They will never have any ulterior motives nor any sign of pretense because they can be honest with each other, challenge each others’ preconceived notions, and acknowledge each other as individuals, not puppets nor pets. Furthermore, their strong sense of perseverance and determination allows them to grow, thrive, and survive this perennial game called life because their mental and psychological strength is totally on par with their physical strength.

Sesshoumaru may be an aloof yet supportive advocate to Inuyasha and Ayame being a happily wedded couple, but Sesshoumaru’s and Inuyasha’s father, Toga the Dog General, and Ayame’s grandfather, Choro the Wolf Elder, would be more than happy to see Inuyasha and Ayame flourish in their lives as a courageous couple and are the most supportive of their bond based on unconditional love. If you are fully aware of my AU headcanon centering around Inuyasha and Ayame, it is Inuyasha who saves Ayame from the Birds of Paradise, vows to become stronger for her, and is even raised by the Northern Yoro Tribe’s warriors as well as Ayame’s grandfather to grow into the formidable warrior he is from his magnificent muscles to his furious fists to his daring determination. Therefore, the Dog General’s and the Wolf Elder’s friendship could make Inuyasha’s and Ayame’s romance come to fruition, even to the point where Inuyasha and Ayame were betrothed while they were very young children. In fact, the Wolf Elder and the Dog General knew from the time when Ayame was born that little Inuyasha would be the warrior to stand by her side.

Inuyasha and Ayame have sealed the deal as a courageous power couple whose relationship can last for all eternity. The sheer strength they have in their physicality and their character as well as how much valor and unconditional love they have for each other are kept top of mind to make their everlasting bond as durable as ever. Even their family and their children complete the picture of how thrilling their life is as a noble warrior couple.

I hope you all enjoyed this and I will see you in the next submission. Take care, stay safe, and please show more love, draw more fan art, write more fanfics, and keep on spreading the love for Inuyasha x Ayame, everybody. 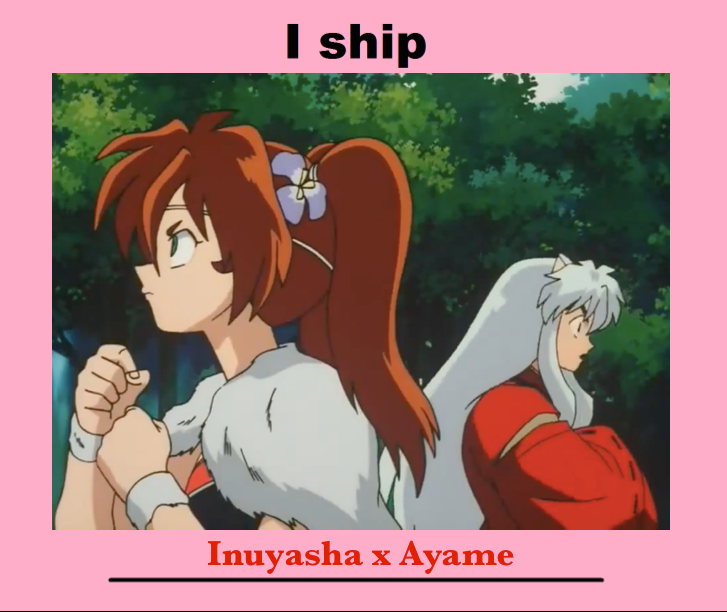