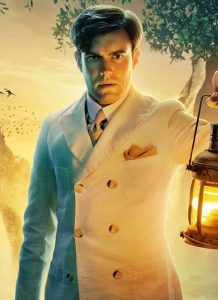 Spoilers for Jungle Cruise ahead:

I am just so tired.  What do I mean, I am tired of stereotypes being used in service of actual characterization and that is a problem with LGBTQ+ characters in so much media.  And sadly, Jungle Crusie which was a movie that I enjoyed falls into this problem with the character of MacGregor.  I had known for a while that straight actor Jack Whitehall would be playing a gay character in this movie and I was nervous when I read that he would be comedic relief.  And well, my concerns were justified.

The best way to describe his character is as foppish and falling into the sissy stereotype.  In how he seems to be afraid of everything and there is a scene early on in the movie where I just had to facepalm as they boarding the ship and MacGregor has so much luggage that Skipper Frank (The Rock) ends up throwing some of it overboard including tennis rackets and a change of clothes for his Sunday best.  Ugh,  that was when I knew I was in for a rough time.

Oh but that wasn’t the worst part, there is a scene later on where MacGregor reveals why he follows his sister Lily anywhere and it’s because she was the only one that stuck by him when his family disowned him for being gay.  Except that word was never used.  As seen here:

Dwayne Johnson, a producer on this film in that same article, stated that he doesn’t believe that the word gay needed to be said in this scene.  First off, need I remind Mr. Johnson that he has always presented himself as straight.  Secondly having a character say that they are gay in a wide-release Disney movie would be so much more powerful than him just saying his love lies elsewhere. Imagine young kids in the theater hearing MacGregor say that he’s gay and impactful that could be for them. Or at least show MacGregor act upon it or something show him maybe have a crush on one of the men in Trader Sam’s tribe.  Or at the very least give more to do than just being comic relief that is mostly used to set up the relationship between Frank and Lilly at the end of the movie.

It’s just so exhausting, how much his character was wasted.  You know it’s funny the same weekend I saw this, Luz and Amity on The Owl House officially became a couple and it was nice seeing actual repesantion of an LGBTQ couple in a piece of Disney media as I watched that clip numerous times after how much this disappointed me.

Perhaps it helps to have LGBTQ+ creators such as Dana Terrace at the helm of projects with LGBTQ+ characters.  I understand that Johnson and Blunt liked MacGregor’s coming-out scene as they felt it was the most powerful scene in the movie.  I get where they’re coming and it is well-intentioned but it could have been so much better and so much more meaningful and how it would’ve taken was for the character to say one word.