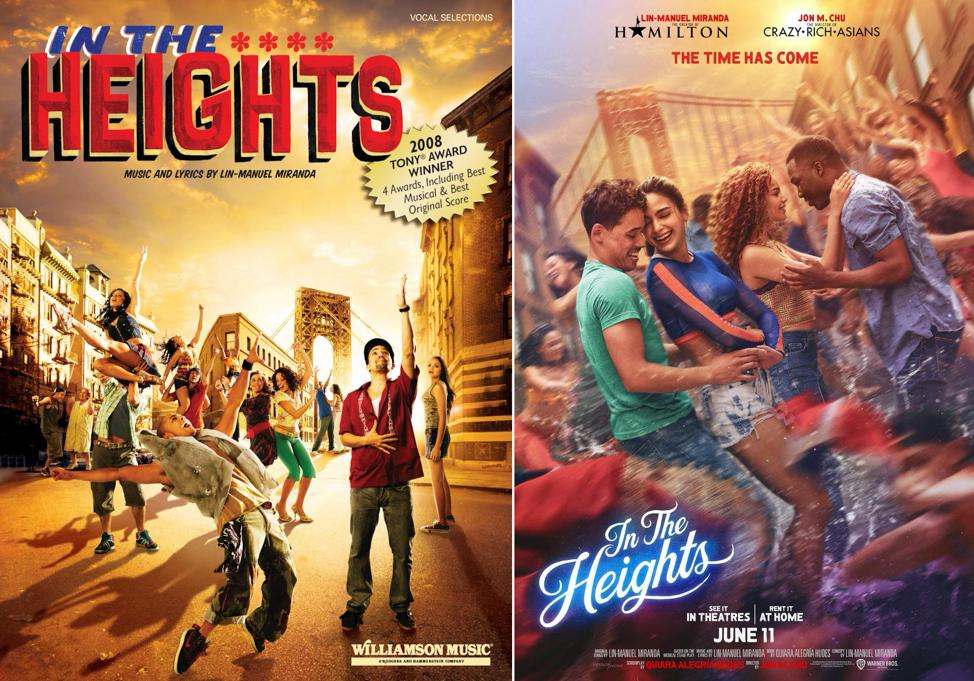 Ever since I began recognizing the cultural and historical similarities between the Philippines and Latin America, a result of Spain colonizing the Philippines 500 years ago, supporting talented Hispanic/Latine entertainers has felt about as important to me as supporting talented Asian entertainers does.  Consequently, I eagerly awaited the movie adaptation of Lin-Manuel Miranda’s and Quiara Alegría Huedes’ Broadway musical In the Heights, about Hispanic/Latine Washington Heights residents trying to enjoy the last summer before their block’s gentrification.  I felt that a look at the film – the first I saw in a cinema since Sonic the Hedgehog – would fall under my blog’s scope, thanks to Jon M. Chu’s direction.

I felt pretty familiar with In the Heights by the time the movie premiered: I own the Original Broadway Cast Recording, and attended a high school production.  Compared to the other Lin-Manuel Miranda musicals I’ve seen on a screen, the movie would fall in the middle; the stories feel less engaging than Moana; but I find the characters more sympathetic than those from Hamilton.  To explore the methods Chu, Miranda, and Hudes used to update the 2008 Broadway musical for 2020-’21 moviegoers, I’ve decided to examine their cinematic adjustments to one of the play’s literal showstoppers.

Look at the fireworks fly, light up the night sky!-The whole cast, “Blackout”

On stage, “Blackout” dramatically ends both Act I, and the characters’ Fourth of July festivities, when electricity in Washington Heights shuts down for the first of several nights.  The movie doesn’t have an intermission, and moves the emotionally powerful “Paciencia y Fe” and “Alabanza” to follow “Blackout” on the same evening.  This required the writers and Chu to ensure that “Blackout” excites, but doesn’t emotionally drain the viewer when combined with the following songs.

The film streamlines the drama of “Blackout” by emphasizing its most optimistic theme.  On stage and film, the number demonstrates that while a disaster can frighten, it can also bring family and friends closer together: Sonny and Graffiti Pete rally to lessen panic on their block, Usnavi and Abuela Claudia share a rare look at the stars, and Nina and Benny reinforce their love.  On stage, Sonny and Graffiti Pete fail to protect the bodega from looters during the blackout, delivering another reason for Usnavi to consider leaving Washington Heights in Act II.  Retaining this in the movie would’ve provided a darker spin on the song’s theme, but would’ve also reinforced destructive stereotypes of short-tempered, selfish Latin Americans.  From a pacing standpoint, devastating the community twice in the same night – including “Alabanza” – would risk exhausting moviegoers.  Consequently, everyone in the movie remains focused on finding shelter in the scorching darkness, with Sonny and Graffiti Pete pyrotechnically guiding their neighbors.  Even without any onscreen violence, Chu ensures high levels of tension and chaos with his hyper-realistic direction, and by utilizing more locations than just the nightclub and the barrio.

Since In the Heights marks the first of several Lin-Manuel Miranda musicals promoting the importance of a positive legacy, it feels noteworthy that by removing any active efforts to destroy the block from within, Usnavi’s temptation to retreat from Washington Heights remains the greatest threat against ensuring the residents’ impacts.  It looms larger in the movie than it did on stage, where it takes until the second song of Act II – “Hundreds of Stories”, which didn’t make it to the screens – for his dreams of returning to the Dominican Republic to seem more like an attainable goal.  In the film, he starts turning his dreams into plans right after the first song.

On screen, “Blackout” accommodates some movie-wide examples of streamlined or added drama by relocating one verse, adding some more lyrics, and changing who sings it.  On stage, the number ends with some will-they-or-won’t-they between Nina and Benny, who ultimately close Act I with a kiss.  The film reduces the number of obstacles in their romance, complicated originally by both Nina’s difficulty finding the confidence to return to Stanford, and by her father, Kevin, preferring that she date another Hispanic or Latino.  Instead, Kevin and Benny seem to get along mostly well; this particular sequence illustrates it when they cooperate to direct other taxi drivers from the dispatch.  Nina’s and Benny’s subplot remains engaging through her poignant quest to figure out how she can forge her own legacy, while still honoring her family and friends.  All of this leaves them without much reason to sing an argument.

The movie instead gives the will-they-or-won’t-they verse of “Blackout” to the main couple, Usnavi and Vanessa.  After the play separates them in the chaos, they don’t reunite until the next morning, in a conversation that puts the future of their romance in doubt.  The film reunites them on the night of the blackout, but separates them again in song.  I’ll admit considering their love the least interesting In the Heights subplot; whether on stage or on a screen, they seem to spend more time pining or disagreeing than actually doing anything amorous.  However, Chu adds tension to their arguments by filming both this verse and “Champagne” in sweeping, uninterrupted takes.  Having Vanessa willingly split up with Usnavi during the blackout also allows her to advance on her project of designing fashion inspired by Washington Heights, as part of a film-exclusive character arc.  While most of her development in the libretto involved falling deeper in love with Usnavi, the screenplay also has her strengthen her admiration of the barrio’s beauty.

The movie relocates Usnavi’s return to Abuela Claudia to before the final chorus of “Blackout”, now optimistically preceded with their echoed assurances of, “You’re not alone tonight!”  It also drives home the theme of a disaster’s potential to unite, by having several other major characters spend the night with the duo.  Although, the verse only ends with those assurances because of the screenplay altering the time and manner in which Abuela Claudia shares some surprisingly positive news with Usnavi.  The new time makes her seem a little more senile than her stage counterpart, but the manner still delivers a resonant example of her helping Usnavi and Sonny when they don’t expect it.

While “Blackout” creates fewer dilemmas than it does on stage, it remains dramatic by leaving some problems to resolve later.  In addition to the uncertain future of Usnavi’s and Vanessa’s romance, Washington Heights still requires several days to regain power.  With no intermission, the film appears to deliver a breather by instead moving “Paciencia y Fe” to this point.  Set almost entirely in Abuela Claudia’s heat-stricken mind, the flashback-driven number originally followed “96,000” both in the play, and in early edits of the movie; the ending also received some new lyrics for the screen.  In the final edit, “Paciencia y Fe” provides an intimate contrast to “Blackout”, before dropping a tragic bombshell on the barrio and viewers.

While In the Heights experienced a lot of restructuring and streamlining during the transition from Broadway to movie theaters, it remains an emotionally compelling watch.  Not all of my favorite songs made it to the screen, but not all of them feel easy to film, anyway.  Jon M. Chu’s direction of the film remains energetic, yet doesn’t frantically distract from the poignant character arcs – some of which feel more complete in the movie than in the play.  Both versions of the musical impress when after spending hours following average people live their ordinary lives, they elicit the viewers’ interest in keeping the residents’ stories alive.  Television might diminish the thrills of In the Heights, but the passionate and resonant film would still benefit greatly from a fruitful second life on home video and broadcasts.

2 thoughts on “In the Heights Stage vs. Film”