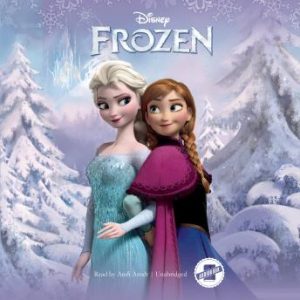 I know that I said in the introduction to Arendelle Library that I was only going to focus on the Dark Horse comics.  Well, I changed my mind.  I figured one of the best places to start was a novelization of the first film.  But what, do I do the actual novelization or the graphic novelization.  Which I was surprised to see wasn’t done by Dark Horse or at least I found wasn’t. There are a lot of Frozen books. 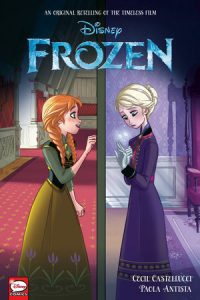 I settled on a novelization in audio form.  Now, this wasn’t my second Frozen audiobook as I have also listened to the book, Conceal, Don’t Feel.  Now with this audiobook,  it’s what you expect, it is just Frozen but in audio form.  It felt like something a parent could use to transition a kid from books on tape to something longer as I could imagine a kid reading along to this with its two-hour run time.

You won’t get any new insights into the characters and that’s okay as it is just another fun way to re-live the movie and spend more time with the characters.  The biggest thing that shocked me but should have was that Elsa was eight in the prologue.

I don’t know why but that surprised me.  Now one of the most important elements in any audiobook is the narrator and this one was read by Andi Arndt and taking a quick glance when you Google her name, she has done quite a few audiobook readings.

She does a good job overall of making the listener feel as though they are in Arendelle and re-living the events.  Even without seeing the events, you feel like you are there right alongside Anna when she goes looking for Elsa.

Now when it comes to adapting the movie for this new media, I have to give author Sarah Nathan and Sela Roman credit that they do not fall into such an easy trap. That being adapting the song lyrics as spoken word dialogue. They trust the young audience enough to know what is happening without having Elsa say the lines to “Let It Go”, which wouldn’t have the same weight as when it is sung.

Now,  while I did enjoy Arndt’s narration overall,  I can’t say that I enjoy the voice that she does for Olaf.  I don’t want to fully blame her as the narrator for Conceal, Don’t Feel also didn’t do a good Olaf voice either.  There being Rachel Matthews, it seems like both tend to give Olaf a deeper voice than how Gad voices him.  It just feels amiss but not enough to fully take me out of the experience.  That is perhaps the only issue that I have with this otherwise enjoyable audiobook.

As I’ve said,  this is a pretty good listen and one I wouldn’t remind returning to. I hope that you enjoyed my first foray into this new series.  Peace!