It’s been a while but as you can see, I’m still here.

Since I don’t have too much to go for coming out of the complete chaos that the previous year has been, I’m going to go back to taking a look at some easy ground and go with Disney.

Shortly after Disney hit their Renaissance in the 90’s, the studio was soon to make the jump into the new millennium with Pixar bringing on the change of creating fully computer animated films which would soon see the end for the use of traditional animation for the company (for the most part). Before that though, they hit a bit of a speed bump with some of their creations with making Straight-to-Home Video productions. Most of these films were sequels to many of the older, and some recent, works in the Disney catalog. While some of them were fairly decent, a lot of them ended up being mostly dull and unnecessary. The that will be covered is considered to be one of the more memorable sequels made from that era which is, surprisingly, the sequel to A Goofy Movie. 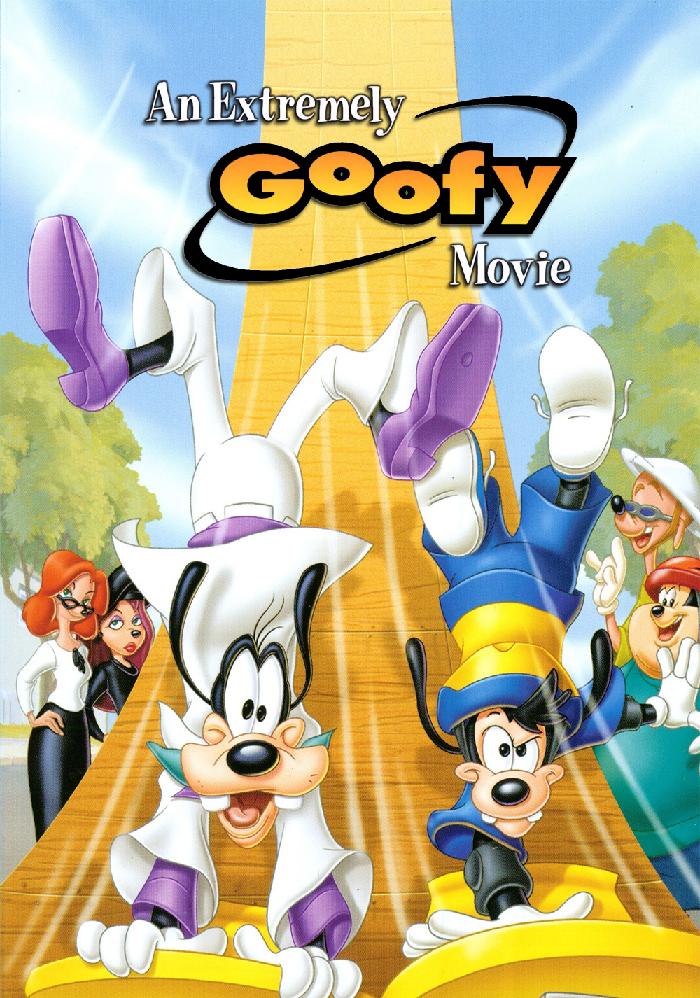 Synopsis: Set several years after the first film, Max and his friends P.J. & Bobby are heading off to college to begin their first steps in adulthood (much to the delight of Pete and sadness of Goofy). The boys then seek out to take part in the College X Games extreme sporting event where they encounter the Gamma Mu Mu fraternity ran by Bradley Uppercrust III (who are veteran champions in the event) and seek to beat them in the competition. Meanwhile, Goofy starts to develop empty nest syndrome shortly after Max’s leaving which soon affects him to the point of being fired after a work related accident. Upon seeking employment, Goofy comes to the realization that he has to get a college degree in order to receive a decent job to support himself (which he dropped out of back in the 1970’s). With that in mind, Goofy ends up attending the same college as Max so he can get a degree and gets to spend more time with Max (much to his horror).

Much like how the first Goofy Movie modeled its plot off of National Lampoon’s Vacation, this one also takes on a premise from a previous film. Given the fact it had a college setting, it’s no surprise that it shared the plot of the Rodney Dangerfield movie Back To School. Given that both movies have to deal with the father of the young upcoming college student can be pretty predictable for both movies, this one still gives it the family oriented approach so it doesn’t end up being a problem following the basic beat-for-beat plot of the movie (and of course, a lot less adult content). Much like the last movie, the borrowed plot elements didn’t really bother me while watching it since it had enough to make it stand out against its Dangerfield counterpart.

While the previous film focused more on Max and Goofy’s relationship like the show Goof Troop did, this had them both go through their own individual stories while briefly connecting throughout the film. Max spends his time in college studying, getting ready for the X Games and living his young adult life with P.J. & Bobby. Goofy on the other hand also tries to spend some more time with Max studying, but he ends up developing a relationship with the college’s librarian and eventually becomes a part of the Gamma fraternity (both of which Max views as a good thing for his independence). The Father-Son relationship between the two of them mostly showed up whenever Goofy or Max was involved with the X Games given that Goofy became one of the Gammas since they viewed him as an impressive skater (they did for Max as well but he turned it down to stay with his friends) and Goofy ended up being more popular which upsets Max. While it’s not as relatable as their relationship in the first film, it was still nice to get a look at their relationship as Max becomes an adult. 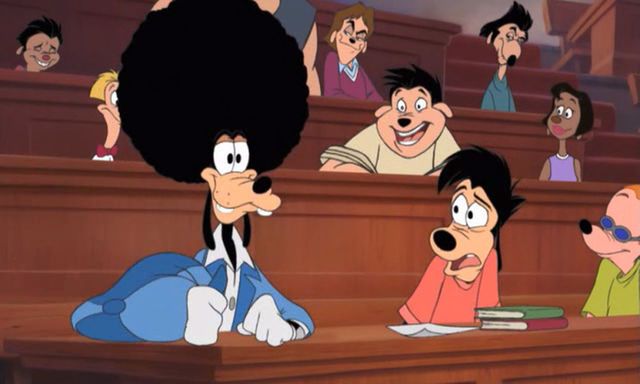 In terms of the returning characters, some of them actually end up having more of a spotlight in this film than the previous one. P.J. & Bobby end up being in the movie just as much as Max and it gives them some minor development which was just about the same as they were in the previous movie: P.J. is a bit insecure about certain things while Bobby is laid back and doesn’t worry about a lot of things. Though I will say in terms of Pete, he’s in it just about as much as the first movie: barely. He pops up at the beginning of the movie to send the boys off with a BBQ and has another one with Goofy after he temporarily goes back home. Regardless of that, he’s about the same as he’s always been: obnoxious and still somewhat of a jerk towards P.J. and Goofy (especially with his excitement of his son leaving) but dialed back on the villainous nature of his earlier appearances.

And, of course, one of the most talkative parts of this film with some fans is the fact Roxanne is completely gone. She’s neither mentioned or seen at all in this movie and basically seemed like a one-and-done character (although she does pop up in an episode of House of Mouse where Max goes on a date with her and had a cameo in the recent Ducktales show). For me personally, she didn’t really strike any interest so I wasn’t too upset at her disappearance.

In terms of new characters, as previously mentioned, the film decides to give Goofy a love interest named Sylvia. The two of them bound over their love of 1970’s pop culture and eventually start dating throughout the movie (as well getting as an homage to Saturday Night Fever set to a Peaches & Herbs song). Given the fact that the concept of ‘Mrs. Goof’ hasn’t really been touched on at all in recent years (aside from sometimes being with Clarabelle Cow) and is still heavily discussed, it was an interesting move to give Goofy a love interest in this movie. While I do admire the fact of Goofy being able to raise his son by himself throughout Max’s youth and send him off to college (seriously, Goofy deserves some massive props for this), it was nice they finally gave Goofy someone to bond with after all the years.

I must say though for the film’s villain, Bradley Uppercrust III was easily one of my favorite aspects of the whole film. While the character’s personality isn’t too deep and is basically an uptight college senior who wants to beat Max, it gets made up for it by his animation (oddly enough). He has some of the most over the top facial expressions whenever he talks that it ends up being hilarious. Add on the fact that you got Jeff Bennett voicing the character and he ended up being a pretty entertaining character regardless of how much of a one-note character he was. 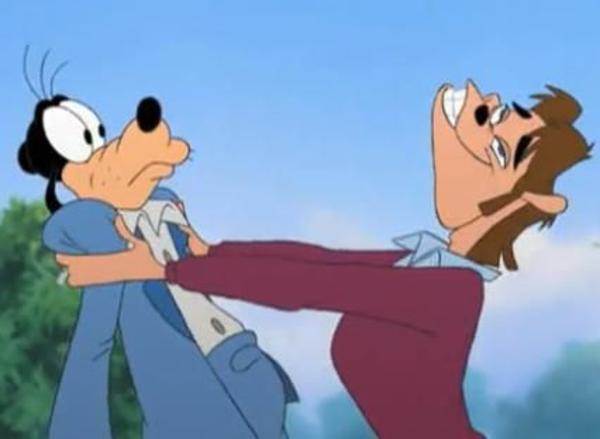 (I think the animators just went all out with him.)

Final Thoughts: It’s a pretty decent movie. Of course it’s not going to be anywhere near as memorable as the first one was, but it still had enough to keep people entertained throughout the movie. Plus in terms of all the Disney sequels that’ve been made over the years, this was one of the better films that were made right before they kicked into full CG animation. It is too bad that they don’t do anything with the Goof Troop series anymore as I would love to see some more stuff with Goofy and Max. Hopefully, they can give it a reboot like they did with Ducktales. I’m sure all the 90’s kids will go nuts for it…like me.

2 thoughts on “It Came From The Drive In: An Extremely Goofy Movie”