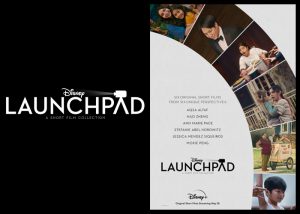 On the last Friday of May, Disney+ launched a collection of short films that serve as part of an anthology project called Launchpad.  This project is meant to give directors that are so often ignored a voice. As noted in this piece from The New York Times.

the studio’s new initiative to support and uplift underrepresented filmmakers. Historically, Disney hasn’t had a strong track record for representation

I have watched all but one of these shorts, but two stand out for this series as they both deal with LGBTQ themes in different ways.  Before we get those, there is another titled Let’s Be Tigers, which deals with a girl dealing with the grief of losing her mother while babysitting a four-year-old boy.  And her charge has two fathers as he refers to them both as Daddy and Papi but they aren’t the focus of the short film.  Still, it is nice to see this family dynamic normalized.  With that out of the way,  I wish to take a look at the two short films that heavily deal with LGTBQ themes.  Let’s start with the more lighthearted of the two,  Growing Fangs. 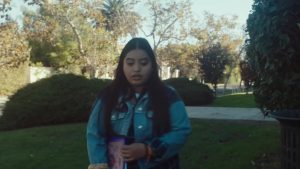 Growing Fangs follows a queer Mexican-American Human/Vampire named Val as she tries to fit in at her new Monster School.  This short film was directed by a bisexual director named Anne Marie Pace and it deals with Val trying to find her place in this world including trying to impress her crush Elsie but goes south when it’s revealed she’s part human.  You see, the month school’s basketball team is called the Horrid Humans and it’s an obvious stand-in for how media has negatively depicted minorities.  A bit on the nose but I believe it works.  Looking at the vampire angle is the least surprising part as they have long been associated with the community. Think Lestat. 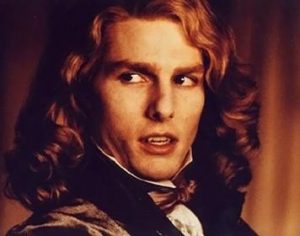 This also ties into how horror has often been viewed as a safe space for the LGBTQ community. This is something that my friend Chrystal Williams wrote about for the website, Gayly Dreadful.

Fear is an all controlling presence and admittedly the LGBTQ community is very well accustomed to fear.

As  Chrystal writes here, fear is all-encompassing and that is something that horror is built on and it can also serve as a release valve for people, which is something the LGBTQ community often needs.   The other angle here is the character of Val being human and vampire that meant to be an allegory to what it is like to be Mexican-American.  This is perhaps the more important part to look at when looking at Val’s character.  As noted in this 2019 piece by Priscilla Blossom.

For marginalized kids like myself, it can be hard to grow up without allies or anyone who understands our position. Growing up in the late 90s, I was the first openly bisexual girl that I knew of in my middle school—and people openly hated me for it. Kids would avoid me in the halls, say terrible things, and play mean tricks on me. I became depressed and anxious, struggling with suicidal ideation.

This is something that Pace wanted to address in her short film as she explains in the making-of featurette, she wanted to know young kids that identify as part of this community to know that they are loved for who they are.  This short film is a great first step and honestly with the world that Pace created, I would love to see Growing Fangs be developed more into either a Disney+ movie or series as the world s so rich with potential and I would love to see more of Val figuring out who she is.

Now,  this next short film is the one that I was so excited about when I saw the Launchpad trailer.  This short film is titled The Little Prince(ss).  When I first saw the title for this short, I thought that maybe Disney would finally be giving us a trans character. Not exactly but this film does tackle the idea of gender identity.

Now,  this is handled rather well as this comes to us from Moxie Peng and they are nonbinary.  They mentioned part of this short was based on their experiences growing up. 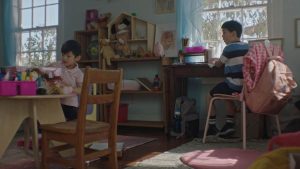 Now, this film tackles something I have discussed long before I even knew and understood what gender identity was.  You see, this short film follows two young boys, Gabriel and Robbie.  The former is the self-titled Little Prince(ss).  He loves ballet, playing with dolls, and loves the color pink.  This is where the thing I mentioned earlier is that it often feels as though there is a double standard in that it is wrong for boys to play with girls’ toys.

Robbie’s father, Mr. Chen believes wholeheartedly and gets ballistic when he sees his son making a doll for Gabriel and takes it over to the boy’s house.   The boy’s parents see nothing wrong but Mr. Chen and tell Gabriel’s parents that it’s not right for a boy to play with dolls.  It’s uncomfortable but this is based on a real moment from Peng’s life when something similar happened to them and their parents.

However, Mr. Wang does not budge. He tells Mr. Chen that he is proud of his son regardless of what his interests are and that he needs to understand that. He also explains that he is proud of Rob for seeing Gabriel for who he is and accepting it. Mr. Chen, speechless, quietly leaves.

Okay, so I wanna break this down a little bit.  First, I’ve dealt with people like Mr. Chen. Last year, when I was taking a course on the history of the internet and how to use it, there was an awful guy in that course that couldn’t understand that it’s okay and actually healthy for boys to play with dolls. 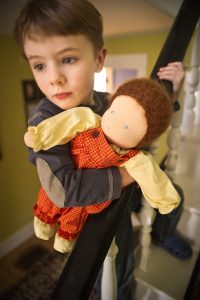 Giving a boy a doll gives him the opportunity to explore his nurturing and caring side, and can teach a boy as much about being a father, just as dolls teach girls about motherhood.

If you know me, you that I love stuffed animals, and having them as a child helped me later in life to connect with people.  This is small but also important and I also want to look at Mr. Chen and his refusal to accept his son’s new friend.  Sadly, this is a reality for so many.  Mr. Wang takes this the best by saying he’s proud of his son and Robbie for looking past those differences.  As this source says, however, it’s okay to give them time but they may not always come around.

No matter how angry this person gets at you, remember it’s not your fault, and you’ve done nothing wrong for being LGBTI+. Don’t feel you need to change to satisfy this person – the only thing that needs to change is this person’s unaccepting attitude or behaviour.

The Disney Wiki highlights something that I didn’t even realize but it makes sense,  at one point, Gabriel is seen watching the 1998 Mulan.  And many believe that film to have LGTBQ+ themes.  Many have read Shang as bisexual.  Moreover,  Mulan has to hide her true identity when parading as Ping.  Which when one thinks about it, it ties into how so many in the community have to hide who they are as a way of being accepted by the normal.  This is something we see with Mr. Chen and how he can’t accept something that challenges his worldview.  It’s a heartbreaking reality that so many have to face.  Now, much like Val,  this is about an LGBTQ+ character of color.  Here being a young Chinese boy and well, I don’t think that makes things any easier.   And as we can see being Chinese and queer isn’t easy.

Homosexuality was decriminalized in China in 1997, but gay marriage remains illegal. The picture on trans and other queer rights is mixed.

That is where another important angle comes in as the Chen family had moved here (the states) from China for a better life.   And well, we see how that goes.   Thankfully, Gabriel and Robbie decided to stay friends despite Mr. Chen’s outdated beliefs.

This short film is beautiful and heartbreaking but also uplifting.  I can’t recommend this film enough.   It is honestly one of the best things I’ve watched thus far for this series.