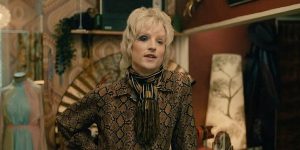 Spoilers for Cruella.  Cruella, the latest live-action offering from Disney is good for the most part.  It’s fun and silly and doesn’t take itself too seriously.  Having said all this, I do have my issues with the film, in particular the character of Artie.  Artie has been promoted by news outlets (not Disney) as the first openly gay Disney character and well, if you’ve been following this series, you know that is not the case.  However,  Artie is played by an openly gay actor, John McCrea, and McCrea has confirmed that his character is gay.

It depends on who you’re asking I suppose – but for me, yes, it’s official: he’s queer,” McCrea explained.

Now,  this isn’t a case of the LeFou exclusively gay moment that I kicked this series off with but I am still so mixed on this character. 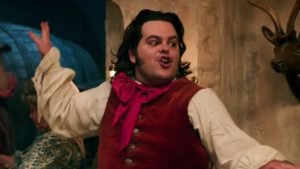 For example one of the biggest things that seemingly tipped me off was Artie’s look as it was inspired by Bowie. 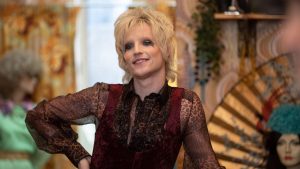 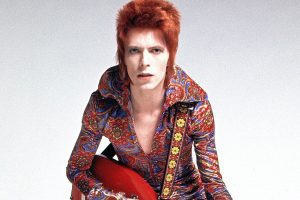 Bowie as inspiration totally makes sense for two reasons: Bowie is an LGBTQ+ icon and this movie is set in the seventies as noted by the glam rock aesthetic.  Let’s start with the former as noted here in a 2016 piece from Billboard.

“I’m gay,” declared David Bowie, “and always have been, even when I was David Jones.”

When he uttered these now-immortal words in the Jan. 22, 1972, issue of England’s Melody Maker, the fledgling starman had just released December 1971’s Hunky Dory and already was giving his interviewer a taste of his glam-rock milestone, June 1972’s The Rise and Fall of Ziggy Stardust and The Spiders From Mars. The British Parliament had only decriminalized homosexuality in 1967; post-­Stonewall U.S. gay life was not yet 3 years old.

Using such an important figure in pop culture history and not doing more almost seems like a waste.  You see, this is where part of my frustration comes in. I really like this character and the relationship that he forms with Estella/Cruella even if to some it might fall into the stereotype of a gay best friend but I don’t see it that way.

The GBF may talk about sex a lot, but is seldom depicted as having any, because too many viewers would find that disturbing. Either he has no love life to speak of (which never seems to bother him), or it’s forever offscreen, only discussed with the heroine over brunch at some pretentious cafe.

Moreover,  my biggest issue comes from how the movie doesn’t use Artie to explore what it meant to be gay in the seventies.  I understand that this is a Disney Villain origin movie but I still think this is something that could have been incorporated.

The Bowie quote touches on this somewhat but save for one line, there isn’t much exploration of what being gay at this time was like nor what it meant. Also since this movie is set in London, I believe that is another huge factor to take into consideration when thinking about how gay people were treated.

Up until 1967, gay and bisexual men could face a maximum sentence of life in prison if they broke the law around homosexuality.

That quote comes from a BBC timeline chronicling a gay timeline for the United Kingdom.  This ties into something, I looked it up to make sure but Cruella doesn’t specify what year it actually takes place in and rather seems to use the aesthetic of the seventies.   Though if we go back to the Bowie inspiration for Artie’s look and assume that he is a Bowie fan and bought the Ziggy Stardust album.,  I think it could be placed in the early – mid seventies.   Again, this is a stretch I admit but I think it can work and would give an idea of what life was like for them.  This also calls to mind some of the things that Artie says when he first meets Estella/Cruella.  This first one I feel does give a small idea but it doesn’t feel like enough.

Some abuse and insults, of course, but I like to say that ‘normal’ is the cruelest insult of them all. And at least I never get that

I do appreciate that this line acknowledges the hardships that gay people go through but the fact it’s only said this one time feels hollow.  Even still, this is frustrating as I like the character and I wish  I could say he’s a good step but at this point, I wish companies would stop taking baby steps and starting making leaps with their LGTBQ+ characters.

Now, there is something else that I wish to bring up that is just so annoying/eye-rolling.

Omar Navarro, a California Republican politician who has tried and failed several times to unseat U.S. Rep. Maxine Waters, is complaining that Disney has ruined his childhood by featuring a gay character in the movie Cruella.

Of course, we were going to get someone complaining about this character and I’m not shocked by this wording.  Honestly,  I’m just tired of hearing people saying the existence of gay characters ruining their life. It doesn’t and just stop.

Furthermore, this is a movie about the fashion world and in many ways, gay people helped to build the fashion industry.

…. the fashion world has always been dominated by queer voices. From Gianni Versace to Yves Saint Laurent to Alexander McQueen and Michael Kors, the most prominent luxury designers over the past century have primarily been gay men. Beyond luxury designers, behind-the-scene roles in the fashion industry, from editorial to advertising, are often also members of the LGBTQIA+ community.

That quote highlights what I said of how the gay community helped to build the fashion world.  So, the fact that there is a gay character in a movie about the fashion world not only makes sense but should be expected.  With that, I find that statement to be so absurd.

As I’ve said I like this character but I am frustrated by how he’s used in the movie. I just feel as though the movie could have done more with him.

2 thoughts on “A Look at Disney’s LGBTQ Characters: Artie (Cruella)”