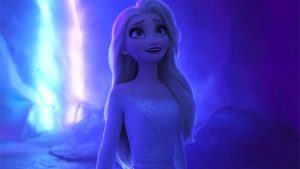 I’ll be honest and say I wasn’t sure if I was going to do this entry but the more I thought about it, the more it made sense. Whether or not, you like Frozen. It’s hard to ignore its impact, which also extends to how so many LGTBQ people have related to Elsa. After all, the hashtag #giveElsaagirlfriend exists. And we almost got that in the sequel. 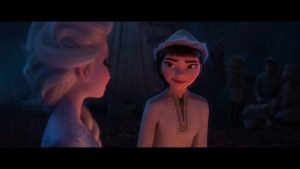 It’s interesting to look at why so many people relate to Elsa. Concerning the LGTBQ community, I believe part of it comes from what her father tells her to do with her magic at a young age. This is also brought up in “Let It Go”

Elsa from a young age has been taught to hide part of herself and this is something we’ve discussed time and again of how people of this community often feel the need to hide part of themselves in the hopes of being accepted.

Once Elsa frees herself from the shackles of what her father instilled in her, she has a stronger sense of confidence. Quite honestly,  I’m not the first nor the last person to pick up on the gay coding of Elsa as observed here.

Queer readings of Frozen and Elsa’s role within the film started appearing on social media shortly after the movie was released in November 2013, but they really began taking off in early 2014.

While the first movie may have planted the seeds,  it’s really the sequel where this idea comes into its own.  We’ve already discussed how this works with “Let It Go” but Elsa has two songs that truly play into this.   The first being the song that Disney used to promote this movie, “Into The Unknown”

Looking at the lyrics helps support this as seen here.

I’m spoken for I fear
Everyone I’ve ever loved is here within these walls
I’m sorry, secret siren, but I’m blocking out your calls
I’ve had my adventure, I don’t need something new
I’m afraid of what I’m risking if I follow you

These lines elicit thoughts of young queer people that are struggling to come out.  They may live in an area where that is not accepted. And sure Elsa is a young white woman that is very much privileged.  But there is still a modicum of truth to this. As the LGBT Foundation highlights, the first person that you need to come out to is yourself.

….the most important person to come out to first is yourself. Being honest about who you are and not feeling the need to hide behind a secret identity is to many people a huge weight lifted off their shoulders.It becomes easier to meet other people with similar feelings and over time can have a positive effect on all aspects of your life, when you are happier and feel that you can be accepted for who you really are.

This is what this song correlates to in many ways.  And it’s also interesting to note how Elsa has a big support system such as Anna, Kristoff, and Olaf but one of her biggest character flaws is pushing people away. She does that in both movies.  To a much greater extent in the first movie but she also does it in Frozen II.  In the first movie’s prologue, we see it as her locking herself away in her room after her parents’ death.

Elsa?
Please, I know you’re in there
People are asking where you’ve been
They say, “Have courage”, and I’m trying to
I’m right out here for you, just let me in

And in the sequel, she literally pushes Anna and Olaf away in an ice canoe.  And this comes from that she believes that she has to protect her younger sister but it also comes across as though Elsa believes that this journey of self-discovery following the voice. 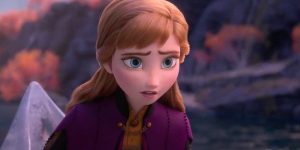 This is an interesting trend in the last three characters I’ve covered for this series in that they have open support but are afraid to embrace it.  I haven’t been able to find anything that confirms this in real life but part of me believes that this may stem from the idea that when someone comes out, they are afraid of how those they love will affect them.  I believe that is something that Elsa shouldn’t have to worry about as Anna adores her sister but Elsa’s fears are still valid.

Before we get to the most important song in Elsa and gay coding, I want to expand our horizons a bit and look at a song from the Broadway adaptation.

This song is called “Monster” and while it’s clearly about how Elsa feels about her powers.  It truly struck me here:

Is everyone in danger/As long as I’m alive

This line here when Elsa sings made me think of all the young queer kids that go through these moments where they believe the world would be better if they didn’t exist.  This is even mentioned in an old study but I still find it rather relevant.

In a 2016-2017 survey from HRC, 28 percent of LGBTQ youth — including 40 percent of transgender youth — said they felt depressed most or all of the time during the previous 30 days, compared to only 12 percent of non-LGBTQ youth (HRC Foundation 2017).

No!/I have to stay alive

Yes, here Elsa is singing about how she has to fix the eternal winter that she has caused but again as someone that has had suicidal thoughts,  looking at this and knowing that young LGTBQ+ kids are still struggling, this is an important message and I look at it as a way of saying that the most important person to live for is yourself.  Speaking of that brings us to the most important song in Elsa’s journey.

Her mother was the voice that started the journey that she went on.  There are many articles that focus on this aspect.

She ends up duetting with the spirit of her mother and the latter woman utters the most powerful lyric of Elsa’s storyline: “You are the one you’ve been waiting for.” The song is full of beautiful lines: “you’ve got secrets too, but you don’t have to hide”, “step into your power”, and Elsa weeps when she sings “I am found!

As stated this is perhaps the most important moment for Elsa as she finds herself and is finally allowing herself to be happy.  And this is part of why I love the sequel so much as it continues such an important journey for Elsa.

I am afraid that this may be as far as Disney will take the coding with Elsa when you consider that this is one of the most profitable franchises that they have. Yeah, rainbow capitalism and all that but Disney is an old-school thinking company that they are most likely thinking about hetromormtive families first.  Bit of a shame if you ask me but I do think having a character like Elsa is important for the next generation of young kids especially if they love princesses as they can see a character that they can relate to.  It tells them that they aren’t wrong for feeling how they feel.

Join me next time for a different entry as we dive into the world of books and look at the two leads from the Hocus Pocus book sequel.