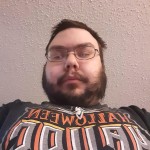 Hi there! So I was on this website a few years ago as Tenma. However, I sort of forgot about the site after a while. I’ve been doing content again since 2020 and have a few series of videos goin.

This is my main project. It’s a mix of reviews ranging from licensed games to whatever show I want to talk about. They’re usually quite short, though. Short except for my Inuyasha retrospective videos.

In October 2020, I decided to start doing readings of comics and manga. They were originally live reads on twitch, but I decided to move them to YouTube. I currently have readings of Shaman King, Dr. Slump, the solo Zatanna run, and IDW Sonic the Hedgehog.

Above posted is my channel. I will likely be posting videos on here in the future (as well as some stuff from the past year or so). Hopefully I don’t forget about Manic Expression so quickly this time. I’d love to get feedback, especially on my show reviews. I’m working (slowly but surely) on my Inuyasha season 2 video.