A Look at Disney’s LGTBQ Characters: Mulan (Once Upon A Time Pt. 2) 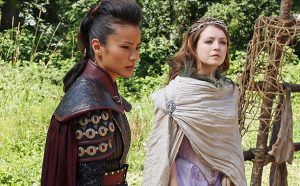 In my eyes, the greatest failure of  Once Upon A Time wasn’t losing track of its characters and the stories getting out of hand but rather how it treated its LGBTQ+ characters.  This has already been discussed when looking at the episode Ruby Slippers.  However, that was not the first (nor last) time that the show failed an LGBTQ+ character.  Today, we are looking at the show’s first LGBTQ character who was introduced in season two and then let down in season three.  That would be the character of Mulan.   In many ways, the character of Mulan falls into what The Take describes as a queer coded female.

What they mean by this is someone that is strong in a fight and can hold their own. Mulan most certainly fits into this category.  In many ways, it also feels as though OUAT was leading fans on.

Mulan actress Jamie Chung talks at a press junket for her new show Believe about how open Once‘s writers were to Mulan and Aurora’s obvious chemistry, well…  it’s too cool not to share, is what I’m saying.

This falls into what is known as Queer Baiting.  This is a tool that has been used many times by media outlets to get LGBTQ+ audiences invested.

it is a strategy (and an effective one at that) used to bait and tease queer individuals into watching a particular show. It’s a marketing ploy more than anything.

In the episode, before Mulan was going to reveal her true feelings to Aurora, we learned that she is bisexual. Yet, that wasn’t stated onscreen.  And this is where the show took advantage of a large section of the fandom as so many fans shipped these two and they were dubbed Sleeping Warrior.  This Tumblr post goes into the show’s history of queer baiting and focusing on this moment exclusively, it’s just a bit of a yikes.  It helps to watch it first.

In preparation for this article, I re-watched the episode this scene was in and it is so much worse than I remembered. This comes in the last few minutes of an episode that isn’t even about Mulan but rather Tinker Bell.  As stated here:

Worth noting that this was also in the same episode where the pixie dust was introduced.  Do you really think this pattern of throwing a bone to their known to be large LGBT fanbase in the very episodes they are pairing off their leading characters is an accident?

So, what happens to Mulan after this moment? Well, first she joins the Merry Men and then becomes Merida’s bodyguard. Now people do ship as I learned from the Shipping Wiki and they are dubbed Brave Warrior.  Again, this is an area where the fans had to pick up the slack as this is non-canon, and Mulan never had another canonical love interest.  Considering that she was bi, they could’ve brought in Shang but nope. 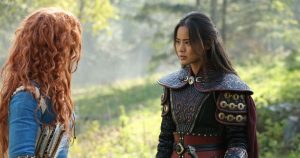 This also ties into another issue, Mulan is a woman of color, and LGBTQ characters of color are often underrepresented.  That was very much the case here.

If the LGBTQ+ community is to do better, the rainbow needs to be a little less white.  It is annoying how much the show failed Mulan when its next two white LGBTQ couples got happy endings.  I originally was angry and thought I’d be raging but rather I’m just sad at what could’ve been.