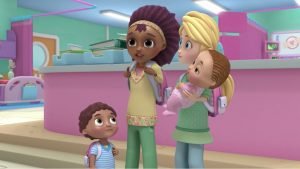 Where do you think conservatives/homophobes hate seeing gay characters the most? From my experience,  in children’s cartoons. Especially educational cartoons aimed at children. If you weren’t around in the early 2000s, you may not remember the uproar that happened when the Arthur spin-off, Postcards from Buster featured a real-life family that just happened to have two moms.

PBS pulled the episode because so many people were upset by this.

PBShas pulled an episode of the children’s show Postcards From Buster that includes children with lesbian mothers. The episode was yanked the same day that PBS received a letter from new Secretary of Education Margaret Spellings condemning the episode and asking PBS to “strongly consider” returning the federal money that went toward its production.

Frankly, I find this absurd but that was 2005 and it speaks to how far we’ve come.  And even looking at Arthur, it featured a same-sex wedding with longtime character and Arthur’s teacher Mr. Ratburn getting married. 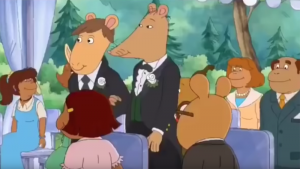 So yay for that but let’s move onto the characters that are featured in this 2017 episode of the Disney Junior series, Doc McStuffins.  It’s honestly less shocking to see a same-sex couple in this show as Chris Nee herself is a same-sex relationship since 2014 as this NYT article talks of her marriage.

This is something important to bring up that we will see as we look at more of these characters, the best way for these characters to feel authentic is to have members of the community.  And that is felt with the actors who were chosen to play the moms in this episode.  Wanda Sykes and Portia De Rossi.  Those are big names to get to appear on a preschool show.  This also brings another point as it showing an interracial same-sex couple.  I feel that this is just as important to acknowledge.  And as PinkNews rightly points out, organizations such as One Million Moms freaked out.

The infamous self-appointed TV censors, who despite their name have just 3,722 mostly-male Twitter followers, claimed the show was corrupting children and enticing them into a homosexual lifestyle.

This wasn’t the only outrage I saw as when I googling this episode, I saw a headline from CBN saying Doc McStuffins was targeting preschoolers.  The way it is reported on there just seems rather gross.

The episode itself is fine and does teach an important lesson of always needing to have an emergency plan in case something goes bad.  In this case, they use a dragon toy that gets a button jammed so he can’t stop jumping to show what to do during an earthquake.

We even see the family put together emergency kits at the end of the episode. 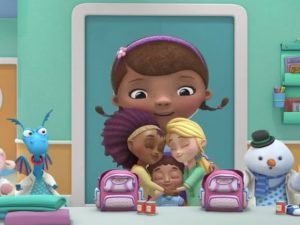 I like that this episode has an important message and treats this family as just a family.  It’s great.  Now, this episode takes place in a world called McStuffinsville that was introduced in the later seasons of the show’s run.  Therefore, the residents of this location are toys.

This is something else that I noticed something else I noticed that was never brought up in the show but I liked how the episode shows a same-sex doll family as toys representing LGBTQ families is still something that’s a bit lacking.  You may think that is not important but if we can have dolls that are disabled,  I believe that it is also important to have toys that represent all types of families and LGBTQ families is an important step in that regard. Now apparently in 2019, Kmart did introduce same-sex dolls in Australia.  I’d say it’s a start but…

The retailer introduced a new series of same-sex family doll sets just in time for Christmas. Each set comes with two parents, two kids, a dog or cat, and some assorted accessories. 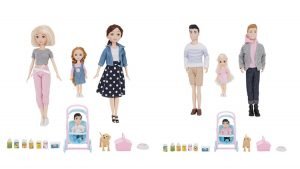 While I do appreciate the inclusion of both two mom and two dad families,  I am a little disappointed that it only appears to only be White families.  This is not me hating on White people because duh, I’m White but rather as this episode shows that same-sex families can come in all races.   That is something that is so important because having an interracial couple is just as important as having a gay couple on TV.

This is honestly one of the best uses of LGBTQ characters that I’ve seen thus far.  Granted, it’s still early and this is only the fourth entry but I could tell this family was handled with care.  Next time, we will remain in the world of television as we head over to Disney XD and look at the character of Jackie-Lynn Thomas. 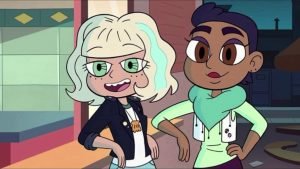