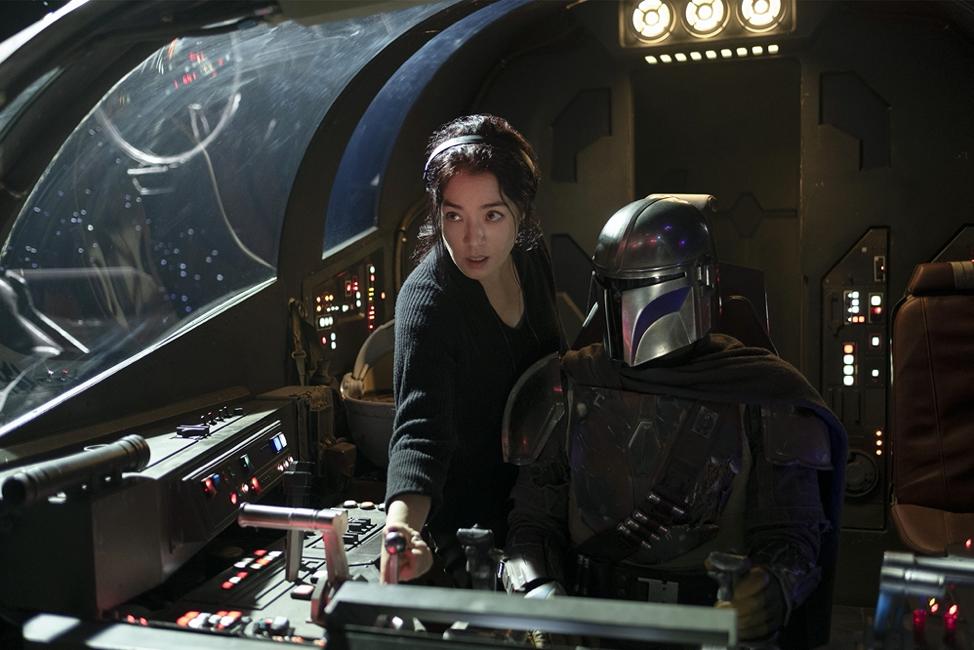 Chinese-Canadian Deborah Chow became both the first Asian, and the first woman, to direct live-action Star Wars material, when she helmed The Mandalorian Chapter 3: “The Sin”.  The chapter subjected Din Djarin (Pedro Pascal providing vocals, alternating with Brendan Wayne and Lateef Crowder for use of the suit) – still known back then as only either “The Mandalorian” or “Mando” – to a life-changing moral dilemma, while raising the bar to a level that the series would take a very long time to top.  It at least feels like the most-quoted Mandalorian chapter, judging by how often fans – including me – reenact the scene in which the Armorer (Emily Swallow) leads her tribe in reciting the now-iconic chant, “This is the way!”   Chow’s other most notable contributions to the show included portraying X-Wing pilot Sash Ketter in Chapter 6: “The Prisoner”, and directing Chapter 7: “The Reckoning” – the first half of the Season 1 finale.  “The Sin” and “The Reckoning” both proved important and very enjoyable, convincing Lucasfilm to hire Chow as showrunner of the Obi-Wan Kenobi show. (To me, her Mandalorian track record seemed especially remarkable when considering the only material of hers I had previously seen came from Jessica Jones‘ disappointing second season.) When I decided to highlight Asian-descended talents behind The Mandalorian, Deborah Chow seemed like an essential choice.

In hopes of providing a fresh take on “The Sin”, my review combines comments I wrote down both before and after I finished The Mandalorian Season 2; my latest viewing of the episode tied in with Women’s History Month.  You can tell when I wrote each paragraph by whether or not I use terms introduced after this chapter, including Din Djarin’s and Grogu’s real names.

It did not know it was my enemy.

The Mandalorian completes his mission to deliver the Child to the Client (Werner Herzog), and puts his share of the reward towards upgraded armor and weapons.  As Mando prepares for his next assignment, the former orphan’s guilt for sending an infant orphan to an uncertain fate becomes harder to ignore.  Despite rules against bounty hunters emotionally attaching to their targets, the Mandalorian braves Stormtroopers and rival bounty hunters in order to rescue the Child from the Imperial Remnant’s grasp.

Many of my praises for “The Sin” will likely seem redundant for readers who’ve already seen The Mandalorian; even after Chapter 8: “Redemption” replaced it as my favorite Season 1 installment, I can’t find much fault.  The first three Mandalorian chapters have a thankless assignment, to invest Star Wars fans in someone whose actions don’t yet seem to influence the titular wars.  Over the course of the chapters, Mando impresses with his badass feats, while demonstrating humanity with his physical limitations and surprisingly broad emotional range.  “The Sin” increases his relatability factor by confirming that he has more heart than most Star Wars bounty hunters, and that he must prove his nobility and courage in order to earn respect from other Mandalorians.  One of the most compelling themes I’ve drawn from The Mandalorian demonstrates that a good deed can inspire other acts of kindness, especially in a corrupt society.  This chapter spectacularly demonstrates that theme when the Mandalorian’s acts of sympathy towards orphaned children – including Mandalorians’ adopted “foundlings” as well as the Child – result in his escape with the Child receiving help from unexpected sources.

I tend to underestimate the importance of TV shows’ directors, at least when I watch shows that depend mainly on the quality of the acting and the writing.  However, The Mandalorian demands its viewers to appreciate its visual impact.  Especially in Season 1, the main character rarely talks – often in ADR’d dialogue – while the second-most important character can’t talk at all.  When the Mandalorian quietly recalls losing his birth parents, or silently demonstrates his devotion to the Child, Chow connects the viewers with his thoughts through optimal views of his subdued body language. The set pieces remain coherent even with dusk lighting, and engage through Mando’s stealth, resourcefulness, and selective mercy.

The more I learn about the making of The Mandalorian, the greater an understanding I develop of Deborah Chow’s challenges behind endearing Din Djarin to viewers.  The New York Times‘ interview with her lists “The Sin” as one of the first chapters to enter production, along with Chapter 1: “The Mandalorian”.  This made her one of the show’s first directors to tackle capturing the emotions of someone who rarely shows his face, at a time when Pedro Pascal and his body doubles hadn’t yet completely gotten used to performing in armor.  Under Chow’s direction, Din only moves either when the plot demands it, or when it can provide especially high levels of pathos.  He imposingly doesn’t fidget when discussing bounty-hunting, but does tenderly take time while shielding Grogu from gunfire to brush the Child’s ears.  During the few scenes in which Din speaks, Pascal’s line deliveries exhibit qualities of shame, anger, curiosity, or relief that wouldn’t come through in the physical performer’s stiffness alone.  While this approach now makes Din seem rigid compared to Season 2 – unless you compare action scenes – it befits the “stoic recluse” stage of his character arc.

Cross-referencing Phil Szostak’s The Art of The Mandalorian (Season One) with behind the scenes pieces for Wonder Woman 1984 implies that Deborah Chow had to shoot most of “The Sin” without Pedro Pascal on set; principal photography appears to have overlapped with the filming of Pascal’s performance as WW84 foe Maxwell Lord.  However, she’s previously confirmed to Rolling Stone that she directed “Pedro and how he uses his physicality” for “the scene in the cockpit where he makes the decision to go back for Baby Yoda”.  Without any dialogue, this key segment for the series hinges mostly on Chow and Pascal shifting Din’s body language.  Within a few minutes, he goes from swiftly preparing for another hunt, to slowly letting a reminder of Grogu’s innocent mischief sink in, to swiftly bailing his hunt as he resolves to recover the kid.  As Din’s private motions openly convey a change of heart, this resonant sequence foreshadows his sentimental attachment to Grogu slowly defying his aloof persona.

Finishing The Mandalorian Season 2 did practically nothing to ruin my third complete viewing of “The Sin”.  The closest it came occurred when the Armorer prevents anti-Empire tribe-mate Paz Vizla (Tait Fletcher in the suit, Jon Favreau providing vocals) from exposing Din’s face to other Children of the Watch, then Din assures her that he hasn’t revealed his visage to anyone.  Din’s guiltless expression of faithfulness to his cult’s rules provided a melancholy reminder that as of this writing, Lucasfilm and Disney+ have left him off at a point when his responsibilities leading a Clan of Two finally exposed his countenance to other living things, but he doesn’t seem ready to completely get rid of the helmet.  Thinking about the spiritual crisis in his future – and the question of whether or not Pedro Pascal’s obligations to The Last of Us will allow S3 to satisfactorily explore Din’s grapples with it – made me want to cry, but I didn’t actually do so.  Otherwise, the episode felt as captivating and mysterious as it did the second time.  Along with the first two season finales, “The Sin” remains one of the most perfect Mandalorian chapters so far.

If you’d like a non-toxic place to further discuss Star Wars, join the Star Wars Television Discord server, which I help moderate: https://discord.gg/7cGUdCz