January 18, 2011 – The day two Pro Wrestlers got sick of being made a mockery – and mocked the bosses on live TV because of it.  Widely regarded as one of the best segments in the history of WWE NXT: The Gameshow. 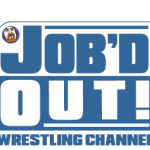