Moviefan12: I must admit that I am not the biggest fan of Harley Quinn. I get her appeal and why people would like her. She has thankfully developed beyond being more than just Mistah J’s girlfriend as seen in things such as the DC Universe/HBO Max series showing Harley striking out on her own. Another great title that features Harley being her own character is Harley Quinn: Breaking Glass which shows a teenage Harley trying to do what’s right even if it isn’t easy. 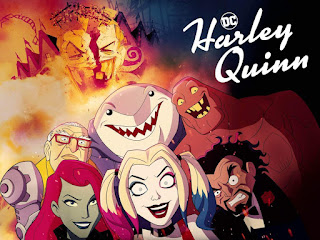 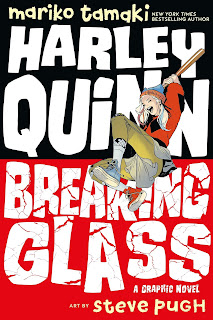 I bring this all up because, in this final installment of the Christmas Comics Caper, I am taking a look at the twenty-first issue of Scooby-Doo Team-Up, which features Harley as she teams up with Mystery Inc.  The Harley featured in this comic uses more of the traditional Animated Series Harley and while that’s not bad, it does feel a little odd after seeing this character move beyond that for years.
I will not be looking at this issue alone as my friend Jim Bevan will be joining to look at this holiday romp with the Scooby gang and Harley.

Jim: Glad to be collaborating with you again, my friend, especially on a topic like this. I am a big fan of the Scooby-Doo team-ups with DC characters. They’re very well written, and it’s always amusing seeing the Mystery Inc. gang play off such famous heroes and villains. Apparently, the popularity of these comics got someone at Warner Bros. to notice since the last Scooby movie appeared to place the team firmly in the DC Universe with a cameo from long-time Batman villain Scarecrow. Like you, I’m not the biggest fan of Harley. I think she works well in small doses, and obviously when the writer knows how to handle her (such as in the recent series “Harleen” which shows Dr. Quinzel’s descent into madness). But like her ex the Joker, she’s been seriously overused and overexposed in recent years, to the point that many people are getting tired of her antics. Call it the Deadpool effect, if you will. Thankfully for this issue, writer Sholly Fisch knew how to properly portray Harley so that she steals the show gracefully without becoming irritating, and has a proper balance with the Scooby gang rather than hogging the spotlight for herself throughout the issue. Though as you said, it was a bit strange to see her in the traditional B:TAS outfit again. When I read it my mind kept switching between Arleen Sorkin and Tara Strong’s voice for her dialogue

Jim: It should be noted that this is Harley’s second appearance in the Team-Up series. The first time she was part of an ensemble with the rest of the Gotham City Sirens (Poison Ivy and Catwoman). Let’s see how she fares in her solo debu

t
Moviefan12: Like the other two Scooby-Doo comics that I looked at this month, the set-up is pretty simple.  The Scooby Gang are at a mall trying to solve the latest mystery as it turns out this is a busy season for ghosts. They just so happen to bump into Miss Quinzel there.  Jim, would you like to take it from here?
Jim: Surprisingly, Harley doesn’t hold any grudges against the gang for playing a role in busting her last time. Rather, she wants to start a new career as a ghost-investigating detective – and as a member of Mystery Inc. Of course, the assets she brings to the party don’t mesh well with that of the others, such as when she tries to get the culprit behind the ghostly robberies to confess by threatening them with her giant mallet.
Moviefan12: The antics with Harley are fun for a bit because like Jim says her style clashes with the Scooby Gang. There is one thing that drags this issue down for me a hair. 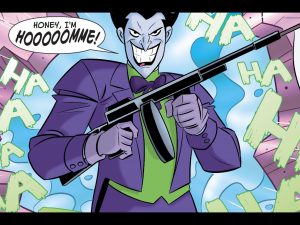 Moviefan12: The Joker shows up. Look, I get that Joker is iconic and where Harley goes, he’s not far behind but I am just so tired of The Joker being everywhere. Harley Quinn’s stories are at a point where they don’t need Mistah J in them anymore. Also, to me, it feels kind of reductive to have him here as Harley says that she is taking a break but as soon as he shows up, she is willing to crawl back to him. Yeah, this is a kid’s comic that is just meant for fun but my issue there is that plays into the biggest aspect of this relationship that I’m uncomfortable with, Harley is an abuse victim that is crawling back to her abuser because she is willing to ignore the bad. Even if we take this as the BTAS version of Joker and Harley, he put her through the wringer in that show as well.  Also, a minor thing but Joker has already his Christmas fun in one of the most famous BTAS episodes. 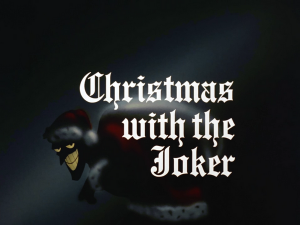 Moviefan12: Joker, you got Christmas with The Joker. You could’ve sat this one out.  I get there was a twist and they wanted to bring in the Bat-Family but I dunno maybe it’s just me, the story was going just fine without his presence. Jim, any thoughts?
Jim: Yeah, I didn’t think Joker was necessary either. This again goes back to my issue with him being overused in comics. Yes, his presence could have led to some conflict with Harley, and she does get a good moment where she clobbers him with her mallet, but she’s too ready to go back to him as soon as he sweet talks her. It’s disappointing. I really wish they would have gone with a different Bat-rogue coming after her.
Jim: Another nitpick is how they have Harley’s hyenas renamed Scooby and Scrappy for the sake of a rather lame joke near the end of the issue. They’ve been named Bud and Lou for decades – why mess with a working formula?
Jim: Despite these flaws, there are still a lot of shining moments in the climax of the issue. We get some fun chase scenes between the Scooby Gang and Joker, cameo appearances of some of Mistah J’s more obscure henchmen Prank and Gaggy, even some nice action at the end with a surprise appearance from Batman and Batgirl. Harley even solves the mystery the team came to investigate; as she points out, she’s insane, not stupid. So all in all, I thought this was a very enjoyable read.
Moviefan12: I’ll agree with my colleague that beyond these minor hiccups, this is an enjoyable comic that while not perfect is still fun and does have a nice blend of comedy and holiday fun. As we’ve pointed out throughout, Harley does play off well with The Scooby Gang. I’d say go ahead and give this one a read if you are so inclined. I’d once again like to thank Jim for joining me to look at this issue.