Holidays at The Loud House: 11 Louds A Leapin’ 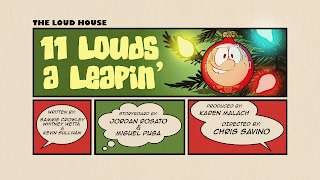 Back in October, I looked at Tricked, the first Halloween special from The Loud House. I mentioned that I had an interest in looking at a rather special episode for myself. You see, this episode is the first episode that I saw of this show all the way through. You see season one had this gimmick where it never showed the parents’ faces and for some reason, that idea bugged me.  This episode, the first episode of season two was the first to reveal the face of Lynn Sr. and Rita Loud. But that’s not what this episode is about.
The Plot
There quite a few subplots happening throughout that are pretty funny such as Luan, trying to get to 12 Puns of Christmas, Lola trying undo 12 months of naughtiness in one day to get on Santa’s Nice list while Lisa is actively being the annoying genius in saying that there isn’t a Santa. Leni turning all the decorations into fashionable dresses and Luna trying to come up with the perfect Christmas song. These are relatively minor when compared to the main plot.  It starts off with Lincoln taking his sled out for some winter fun and goes into the yard of neighbor, Mr. Grouse, and well, he’s not the nicest person. Lincoln devises a plan to get it back and it doesn’t go as planned as he’s caught and Grouse wants to call his parents but everyone is caught up in their holiday celebrations. Mr. Grouse catches Lincoln and has him clean up the mess that he made sneaking into Mr. Grouse’s house.
Lincoln notices that his neighbor also has a big family and is sad that Mr. Grouse doesn’t have anyone to spend Christmas with. So, he gets his family and friends together to give him a perfect Christmas. It’s very sweet and is what made me fall in with the show in the first place. 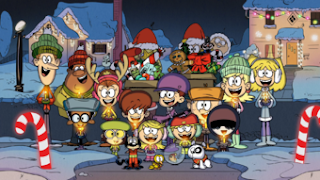 This shot is easily one of my favorite shots of the show as it truly does invoke the feeling of Christmas in me.  This gets Grouse to open up and be a nicer guy. Including a beautiful song.
Music
Christmas Song
Yeah, I don’t think this song was ever given an actual title.  Still, it’s really great and very sweet.  It truly taps into the Holiday spirit
Characters 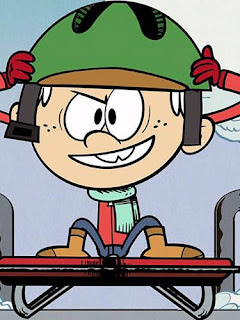 I really enjoyed Lincoln in this episode as I usually do as this shows that while he is a kid and that he messes up from time, he’s a good kid that wants to make things right for people.
Mr. Grouse voiced by John DiMaggio 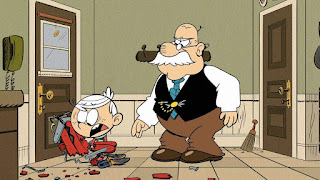 Mr. Grouse is the typical old curmudgeon that just needs someone to show him that they care about him and share the Christmas spirit with him but it works and I’m a sucker for that kind of stuff.  I’m a sap.  It’s sweet and it works.
My Final Thoughts
This year, we got two Christmas episodes rom The Loud House and one from its spinoff, The Cassagrandes. We were also supposed to get a live-action Christmas movie that was announced in February and yeah…

The Loud House: A Very Loud Christmas, will premiere in late 2020. The film will depict Lincoln and Clyde working to preserve the Christmas traditions when the Loud sisters plan to have their Christmas plans elsewhere.

Yeah…I’m kinda glad that didn’t come out.  Still, I’m glad that I got to catch this one again as this episode means a lot to me considering it’s what brought me into this show and The Loud House has now become one of my favorite animated series. It’s always a pleasure to watch and just makes me happy especially this Christmas episode.