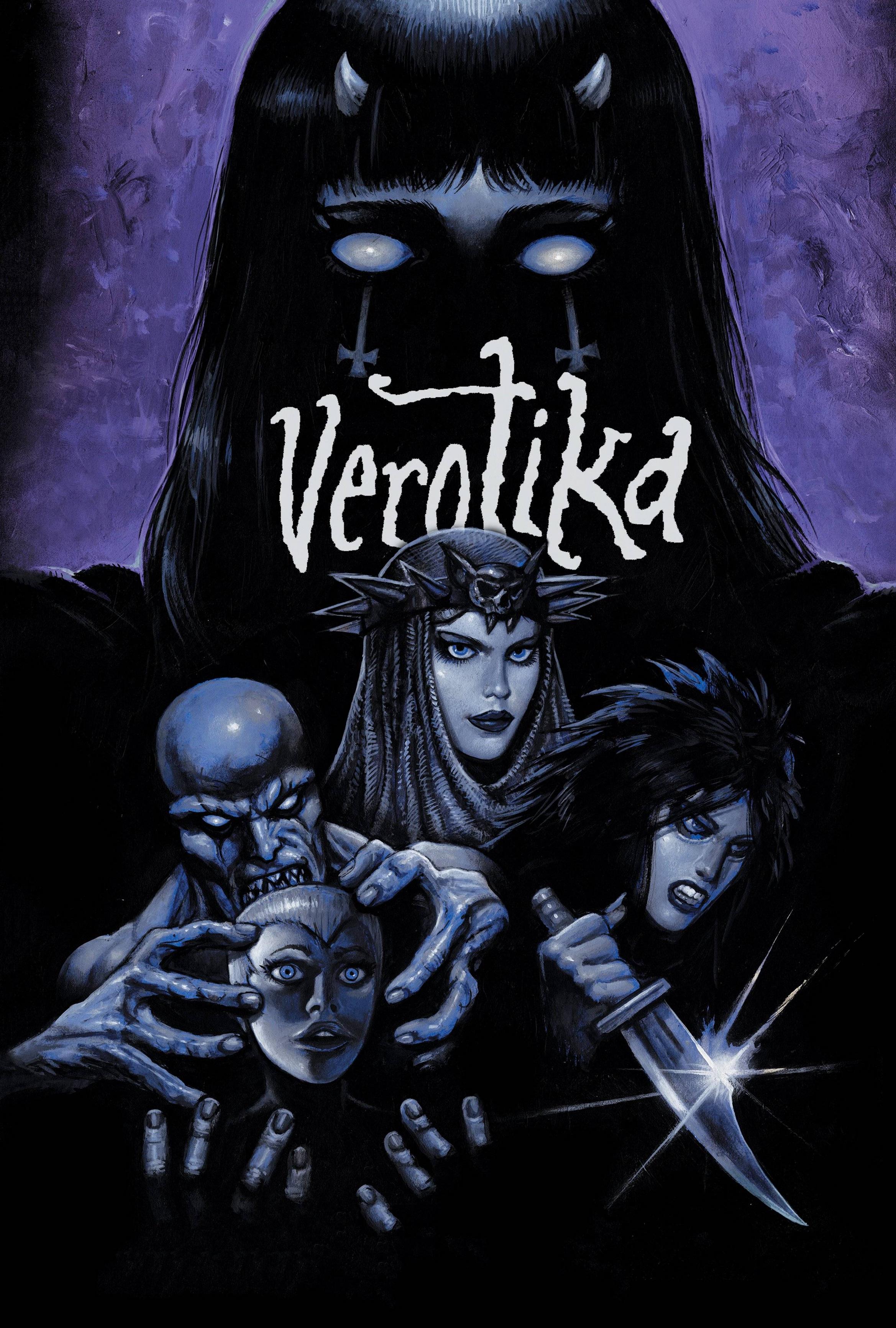 Jarvisrama99: (glaring off in a trance)…I now know what it’s like to be Rich Evans…

TC: I guess to start this off, we need to first talk about the man behind the madness: Glenn Danzig. He’s well known for being the lead singer and founder of the Horror Punk group Misfits, Deathrock group Samhain and his eponymous metal band along with working with classic acts like Johnny Cash and Roy Orbison which has made him into an icon for the Punk and Metal genres as he’s worked in the industry for over forty years.

Much like many musicians, he’s pursued different interests outside of music. Aside from acting in a few TV shows, he created a graphic novel company called “Verotik” which put out adult oriented comics which has been running since 1994 and has gained its own following over the years. While the company has received a few adaptations over time in a few movies, Glenn announced he would be making his film directing debut by adapting several stories from the company into an anthology film entitled Verotika that came out last year and has entered the small group of musicians who have entered the director’s chair.

TC: Given that his music deals with themes of horror movies and satanic imagery that took influence from the classic Rock n Roll acts of the past, it’s no surprise that’s I’m a fan of his music. Though I haven’t looked at any issues of ”Verotik”, I have reading similar adult oriented graphic novels and magazines such as ”Heavy Metal” and the Underground comix of the 1960’s so I can get a sense of what he would be trying to go for with not only the company, but the film as well (plus knowing his music also helps too).

Jarvisrama99: I’m afraid I’m in the dark on this one. I’ve never listened to anything by Danzig before, nor been aware of the comics the film adapted from. I only knew about the film when I saw a review on it earlier this year… little did I know I’d end up seeing it..(glares off again)

Jarvisrama99: Basically it’s an anthology movie loosely woven together with an Elvira-type character inserted in between the segments, all of which are uncomfortable to watch, and even more so frustrating on the technical side.

TC: Right off the bat, it’s pretty noticeable that this movie is a mess in so many ways. the most noticeable of them being the production value. It’s incredibly cheap. It feels like it comes right out of an Ed Wood movie with some quickly made sets that were done within just a few minutes of arriving on location and pretty obvious effects that you can clearly see being activated by some of the actors (come to think of it, most of the props in the third segment look like they come from a Halloween Store). Some of the make up effects are pretty low budget when you take a look at them (especially when you see the Albino Spider take human form when four of his six arms don’t move and the incredibly obvious CGI spider he was before hand) along with obvious wigs and contacts that stand out incredibly on the actors that it becomes a bit bothersome to look at sometimes.

Jarvisrama99: At least Ed Wood films are fun to watch, this was infuriating to sit through. Yeah, it’s low budget definitely shows, but you can make that work to your advantage in certain cases if you’re involved in the story. That isn’t the case here, as the movie feels like someone unfamiliar with the format of film storytelling. Numerous times scenes go on for too long, which is visibly shown since the actors come off visibly uncomfortable and just keep going with no direction. It doesn’t help in the first segment it has odd line reads that make me wonder if they were considering reediting them by cutting back and forth with footage to make it feel more natural, but instead decided not to and left everything in.

TC: Since the film decides to go with an anthology format, it’s pretty obvious that it would be compared to the likes of Trilogy of Terror, Black Sabbath, The Vault of Horror and Heavy Metal (given its content). Needless to say, it falls flat against all of the others among them. In terms of the three stories were given, there wasn’t much to be invested from them. While I’ve never read any “Verotik” tales at all, I didn’t have much to go off of in terms of how well they were adapted but I would like to think they were done a lot better in their original format and would be more investing that this. The first story felt like a pretty cheesy stalker story…except with it being about a girl and a giant humanoid spider. It became pretty dumb as it progressed and it was pretty rushed so it was resolved fairly quickly (even for an anthology tale). The second one was pretty much a weird homage to Eyes Without a Face involving strippers. While The third story would be interesting if they added more attention to the story since it takes inspiration from from Elizabeth Bathory, but it doesn’t really dive too deeply into its concept and feels pretty unsatisfying if you’re hoping for something on the graphic side from the three stories (it has plenty of nudity but the violence is underwhelming). Not to mention the fact that there’s not really much of a story there. It’s just the countess picking some girls from a village and killing them. It comes across feeling like a Hostel movie but even those has some story elements to them.

Jarvisrama99: It’s a bad sign when the opening of the film has Morella stabbing out a woman’s eyes with her fingernails for no reason. It sets the film’s tone in just having stuff happen but not done in a way you feel invested, but rather that was unnecessary and went on longer than it should’ve.

I found no enjoyment in any of the segments. As it went along the filmmaking felt more natural, but it doesn’t help it started out with that spider segment which is the equivalent of starting right at rock bottom. Nothing is explained to the audience because the segments are too short to expand on their stories, and at the same time have so much extra footage that should be cut to trim the run time.

The stories… no, screw it. They all suck and were poorly done. I’m sorry, but I can’t go in depth on any of this stuff. This felt like a fetish movie someone made and I hated every second watching it. I felt uncomfortable, I kept wanting to just give up and not watch the rest, everything about watching this film felt wrong to me and I hated everything in it.

Allow to to demonstrate what my viewing experience was like:

For the framing device, it’s incredibly dull. All it consists of is Morella just being there telling us “here’s the next story” while doing something mildly gory and that’s about it. She doesn’t really have anything unique about her that makes her stand out from characters like The Cryptkeeper or Elvira and easily becomes forgettable in comparison.

Jarvisrama99: She’s another woman practically naked with shitty horns on her head to make her look like a demon. And that wouldn’t be an issue except she isn’t a character with a personality or giving us anything memorable.

Of course, with the rest of the film being a mess, does the acting help at all?…

TC: You can tell right off the bat that the actors don’t put any effort into their performances in the film. They come off as being incredibly emotionless, stale and feel like they aren’t even trying to pull off something remotely talented (not to mention the absolutely awful fake accents that show up throughout multiple segments). It feels like they really weren’t given any sense of motivation for their scenes and just read the lines and somehow Glenn thought it was fine. While they definitely could look the part of what was intended (which isn’t too surprising given that they’re mostly porn actors so they can look attractive), they really didn’t sell the performances at all.

TC: I wanted to like this movie. I was giving it the benefit of the doubt as the reviews came rolling out when first released and I figured that it could be better than what they said but that sadly just could not happen. This was a pretty big disappointment for me. I’ve heard this movie is being compared to “Plan 9” or “The Room” in terms of how likably bad it is. For me though, it doesn’t live up to that title and I couldn’t get any enjoyment from it. To be fair though, I do think this movie could be fixed if it had more time to be worked on with a bigger budget, longer run time and a better cast. I hate seeing Danzig’s first outing in filmmaking being a flop but hopefully the next will be better.

Say what you will about Rob Zombie’s movies, but he’s still pretty passionate about what he wants and his work is more well made than this.

Jarvisrama99: Certain people aren’t cut out for making the transition from one medium to another, and Danzig I don’t think is a guy that should take on filmmaking. If he does attempt to retry in the future, I hope he gets better and perfects his craft…I won’t watch it, but I hope he learned something from this to make improvements. No, I agree this is nowhere on the level of “Plan 9” or “The Room”, and I can’t think of anyone watching this with that mindset. I couldn’t imagine watching this with the mindset “it’s so bad it’s good”, no it’s just bad. Please, don’t bother checking this out. I can’t think of anyone who would be the right audience for this.