The Horrors of Riverdale: Afterlife with Archie 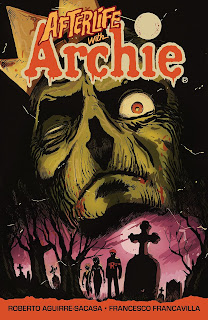 Since 2017, I’ve looked at the horror side of Archie Comics by delving into the Archie Horror line 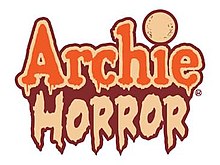 This started with my love for Sabrina Spellman by looking at Chilling Adventures of Sabrina and last year, Jughead: The Hunger. 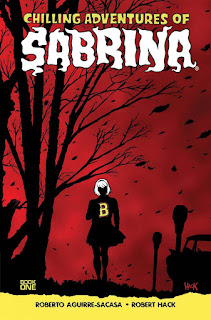 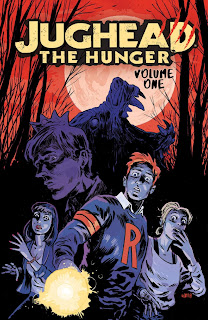 This is something that I hope to keep as there are other titles I wish to cover such as Vampronica and Blossom 666.  This year, however, we turn to the title that launched Archie Horror, Afterlife with Archie. Now I have some history with this particular book as I had read it twice before writing this review. The library I volunteer at (that I miss) has a copy of it and I first read it out of curiosity and then last year I took a Zombies course and this was one of the books that I did a paper on.
Having that history with this book led me to purchase it while out on a trip with my mom and I decided this would be the book that I did for this year’s Horrors of Riverdale entry.  This book has some interesting history as it was launched because of a cover for the series, Life with Archie. 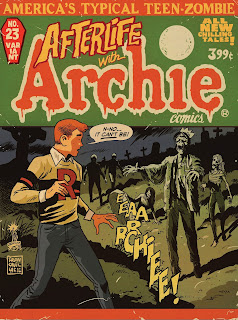 This cover was seen and the head of Archie Comics thought perhaps, an Archie comic that dealt with zombies could have some appeal.  And they were right as Afterlife with Archie has gone on to become one of the most beloved titles not just from Archie Comics but also one of the most celebrated horror comics in recent memory.  And for good reason as this comic doesn’t just pluck Archie and friends into a random zombie story.  It recontextualizes the world of Riverdale and asks how would that affect Archie and his friends.  That is perhaps the biggest reason this story took off and why Archie Horror, in general, has become so popular as the stories actually take the time to ask and then answer those questions.
It is not horror for the sake of horror but rather there is a purpose.  And using the Archie characters does something else that many great zombie stories should do, it allows us into the hearts of the characters to see and understand what they are feeling.  In other words, it can tap into the emotional core of the story.  This is so important in understanding, while zombies are important to a story such as this looks to humanity.  In many ways, that is what is at the core of Afterlife with Archie.  This 2018 piece goes into a bit more detail.

Is the zombie apocalypse an allegory for our current civilization? Is it a reflection of our fears about a breakdown in societal norms?

The last part of that sentence is perhaps the most important part is the idea of societal norms as one can look to Archie and co and normally picture them as clean-cut and wholesome family comics. 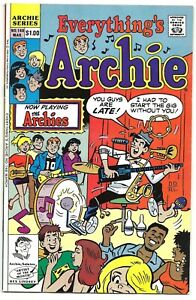 By taking this wholesome and normally family-friendly in a horror setting, it moves away from the typical societal norm that is associated with Archie Comics.  I know that some could argue that something like this has been done with something such as Scooby-Doo on Zombie Island. 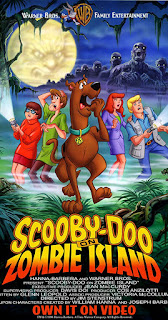 While there is some truth in this,  Zombie Island found a balance between the classic tone of Scooby-Doo and the tone of a Zombie movie whereas Afterlife removes the nice and comforting tone of an Archie comic and goes for straight horror.  Think of it this way, Zombie Island could be a child’s introduction to zombie stories whereas with  Afterlife  it helps to have a familiarity with how zombie stories play out.  This is an observation and not one that I’m a hundred percent on.  A note on this is how there is a panel that has Grundy and Weatherbee referencing the opening of Night of The Living Dead.

Just replace Barbara with Gearldine and you get the idea.  Now, I am not saying that this comic is just built on references to classic zombie stories but rather Afterlife pulls from classic zombie stories to help tell its own story.
Speaking of story, let’s head there and take a look at how the story plays out.
The Plot
The story opens with a distraught Jughead heading to the Spellman household carrying Hot Dog in his arms hoping that they can bring him back to life. Hilda and Zelda tell the young boy that there is nothing they can do to save his beloved dog. 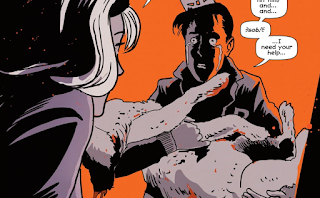 And in a sequence that calls to a classic King story, Jughead is told

make your peace, say your goodbyes and remember that sometimes dead is better 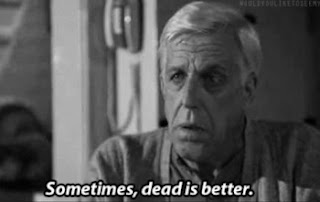 It’s a morbid thought to be sure considering that it is often hard to say goodbye to those that we cherish and love. And that is the case with Jughead and Hot Dog but while that line on the surface is just a reference, it speaks to something bigger in how we have to be willing to let go and say goodbye.  This is something that Sabrina has a hard time with as she look on Jughead and wonders if she did the right thing and how she’d react if it were Salem that were run over. In other words, Sabrina wants to do the right thing but it’s going to end up having dire consequences. Sabrina goes to Jughead’s at night and says that she can help him bring Hot God back to life.  Yeah, her aunts don’t take too kindly to this as they banish her for a year for going behind their backs for doing this. 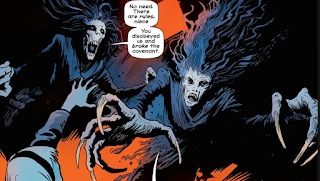 Yikes,  yeah that’s creepy but it serves a purpose and sets off the events of the story.  Jughead’s dog is back but he’s not the same and well yeah.  Meanwhile, we get the typical Betty and Veronica drama with Archie that one would expect in a classic Archie comic. However putting it in this setting gives it a darker tinge and with the zombie acoplayse about to start, also shows how unimportant it is in the grand scheme of things.  Later, we find out that Reggie ran over Hot Dog and this again ties into how the comic plays with the idea of how would the Archie gang react in a horror story.  Taking this further, we see what happens Hot Dog has gotten to Jughead and becomes the first human zombie in Riverdale.  People think it’s a costume at first as they are at a Halloween party at Riverdale High but it’s soon revealed to not be the case 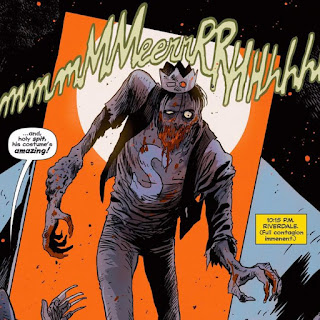 This ties back into terrifying these stories can be and how it twists the idea just enough to make it truly terrifying. And man between this and turning into a werewolf, Juggie has the worst luck. 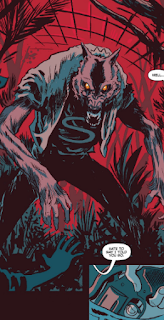 And now thanks to Jughead, the zombie attack has spread throughout the town of Riverdale.  There is another interesting idea that’s brought up here. It’s typically suggested that zombies have no memory of their past lives once they are turned. But as Veronica explains to her father after Archie gathers everyone and takes them to Lodge Manor as that is the safest place.

I swear on some reptilian level, that thing that once was Jughead Jones recognized me…and remembered we hated each other

This idea is horrifying and what is even scarier is how Veronica wants to pretend this isn’t happening by holding a pool party even  Midge and Moose had been turned and are about ready to attack until Hiram stops them. At least he’s an understandable jerk unlike on the Riverdale show where he’s just a straight-up villain.  The idea of overcoming who these people once were is felt even more as Archie has to attack his dad as his father had been turned and he is dealing with the remorse of having to kill his father but as Betty points out.

No—No Archie, that thing wasn’t your father…that was something else

This ties into one of the hardest things to remember but to borrow from my paper and a zombie story I used for that called Dead Like Me.

I feel as though this comic makes it explicitly hard to follow this rule as we are dealing with established comic characters that people love. Yes, other comics have done such as Marvel Zombies but I believe the point still stands in how tragic it must be in seeing these characters that people know and love being turned. 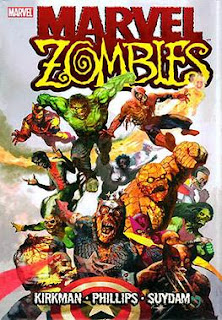 There is something else that I want to bring up that ties into the societal norms angle from the start and that is at one point Archie decides to go out and try and find the parents.  And one of the first things he comes across is Pop’s burning down to the ground. 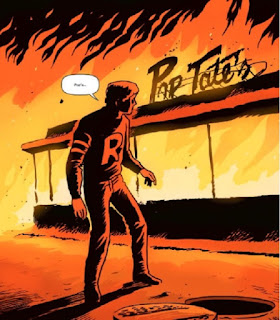 As Den of Geek writes in their on the scariest moments from Afterlife with Archie.

… we see it burning to embers as a manifestation of the innocence that is being stripped away from Archie in this comic. He’s no longer worrying about how to fix his jalopy or deal with having dates with Betty and Veronica scheduled for the same night. Now he’s worried only about keeping his loved ones alive

This ties back into what I said at the beginning but it reveals when pressed how unimportant the Betty and Veronica feud is in the grand scheme of things.  This is even further explored in how Archie and Mr. Lodge butt heads towards the end of this first arc in that they have to leave Riverdale if they hope to survive and live on.

This first arc is titled Escape from Riverdale and the events that take place here showing how these loved ones have turned show how you can’t live in the past and as much as you love the place that you live, it’s not your home anymore.  As silly as it might seem, this is something that was brought up in a 2014 article about how cities are the worst place to be.

.. the researchers note, cities would give way to the hoard the quickest. (As they can and have in the face of other infectious diseases.) But it took the zombies weeks to, for example, penetrate the less populated areas of upstate New York.

Lodge Manor is running low on supplies and Archie and Smithers, the Lodges’ butler realizes that it’s only a matter of time before things get direr.  Leaving isn’t just the best option, it’s the only option.

I’m not only going to look at characters in the traditional sense of how I’d do it because I don’t think it makes sense but rather talk about how the characters feel real and you can relate to them on a level that you might not have thought of.  This isn’t just some silly comic that is a zombie story featuring Archie characters but rather it actually asks how would these characters react if zombies came to Riverdale and it is made believable and that makes it so much more terrifying.

I still think Chilling Adventures of Sabrina is the better book but this one is also really good and being the one that started it all shows that this idea could work and why people love Archie Horror as much as they do. It’s not just a joke but rather something that treats both Archie and the horror stories with equal respect and puts them together in a combination that goes so well it’s like peanut butter and chocolate. It cannot be overstated enough how good this book is and why I think Archie Horror as a whole is really great.