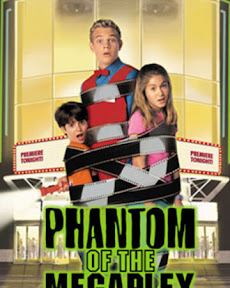 There have been many adaptions of The Phantom of the Opera over the years. In 2018, The Creature took a look at many of these.   I had considered looking at this film that was loosely inspired by the tale of the Phantom but couldn’t find anything to say about it.
I find this quite surprising as after having watched this movie, I must say that this is one of the better films that I have watched before. Now full stop, this film originally in November of 2000 but I recall Disney Channel airing this as part of their Monstober event (and other movies were released in other times of the year that I’ll be looking at).
I’m going to treat this review a bit differently as this is one that I’d like you guys to seek out and watch yourselves. And it is also a mystery and I do not wish to give away the identity of The Phantom in this film.
Location
One of the big things that really helps this film in my opinion is that it is akin to a bottle film.  Not quite but still, take a look at this idea.

A Bottle Movie is a movie that entirely (or mostly) plays out in a single location, usually a small one. A good way to tell if a film is “bottle-like” is if it can be turned into a stage play, because the term Bottle Movie comes from the idea that the whole film could fit into a confined space, like a bottle

As once the action kicks in, we are at the Megaplex for the entirety of the movie, and that works as the Megaplex fills big and allows for the various screening rooms to be used to full effect such as moving an inflatable dinosaur into the theater where a monster movie is premiering.

The fact that the megaplex feels so real and as though you are there with the characters as they are trying to figure out who The Phantom might be.

I gave you a taste of the main plot up above.  There is a premiere of a new monster movie happening in a city’s massive megaplex.  Which has taken over the original one-screen movie theater after it collapsed.  Oh and the first movie that was shown there. 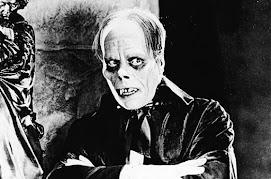 Having this knowledge helps set up what to expect and we are also introduced to the characters but I will tell you right now, that unless it’s Pete (our main character), his younger siblings or Mickey Rooney, the supporting characters do not add much to the story.  They are mostly there to be suspects for the identity of The Phantom.
The movie’s plot is simple as stated, someone is attempting to sabotage the premiere of a big new monster movie and the way do this is by pulling stunts that align with the movies that are being shown such as using fans to blow stuff into the audiences’ faces in a screening of a tornado movie.
So, it’s up to our main characters to find out who The Phantom is and stopping him before things get worse as the premiere looms closer.
Characters
Main Character
Pete Riley played by Taylor Handley 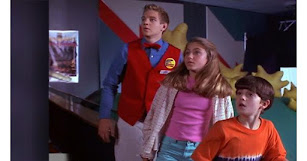 Pete’s character on the surface doesn’t have a lot there at first.  He is just the type of character that needs to learn that he has time to be a kid and not to overwork himself. Even though, he just became the youngest assistant manager at the Megaplex. He’s not bad but other characters really carry this movie more than Pete.
Supporting Characters
Karen & Bryan played by Caitlin Wachs & Jacob Smith 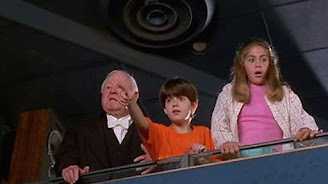 Compared to the siblings in Mom’s Got a Date with a Vampire, I’ll take these two any day of the week.  They were likable and yeah, they did have their moments that siblings have but you could tell that these two really cared for one another. There was a fun sibling dynamic between them and Peter that made this move so much more fun to watch.
Movie Mason played by Mickey Rooney

Mickey Rooney is so good in this movie and his performance just makes this movie feel all that more special.  His character, Movie Mason’s family owned the theater where the Megaplex now stands and still shows up thinking he works there. He doesn’t but he has such a love for movies that you can’t help but love him.  He has one of the best moments in the film.

When we arrive in this world, magic is all around us. You simply have to see a baby discover a butterfly or a toddler splash in the bath for the first time. Yet, as the years pass, simple pleasures aren’t quite so simple to find. Myths and legends fall away. Santa’s secrets are revealed. Card tricks lose their fascination. True wonder is hard to come by. But there’s always… magic at the movies. Pirate ships, bicycles that fly, angels earn their wings, beautiful women marry handsome men and we all learn there’s no place like home

That moment was close to bringing me to tears because of Rooney delivered it.

Shawn is the uptight manager that wants to make sure everything goes right and cannot stand to have a thing out of place. He’s on edge because of the premiere and he didn’t get a promotion that he thought was promised.  However, he looks at the bigger picture and just wants the mishaps to stop (or does he?) because he just wants to get attention from his higher-up.

This movie is quite good and one of the best DCOMs that we will be looking at during this event.  This is one that I can’t suggest enough.  This film is quite enjoyable and easy to get wrapped up in.  Join me next time as we look at… 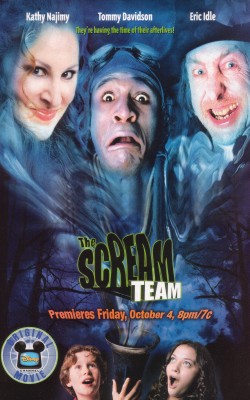 2 thoughts on “A Look at Disney’s TV Movie Halloween: The Phantom of the Megaplex”