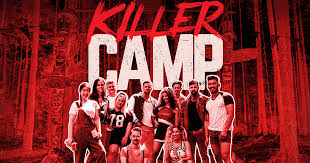 I’ve made my love of reality tv known throughout the years and years ago back when we were on the very first iteration (i.e. the Webs version) of the site, I looked at the reality show Whodunnit for 31 Days of Halloween. Its connection to Halloween was tangential at best. However, The CW obtained the rights to air a British reality show that fit the bill much better titled Killer Camp.
Going in with that title, you have to know what to expect as there is a lot of cheesiness in this show.  This show follows in the footsteps of the aforementioned Whodunnit and the even earlier reality show, The Mole in that a group of contestants are brought together to compete for a pot of money but someone is working against them and in this case, it’s the Killer(s). 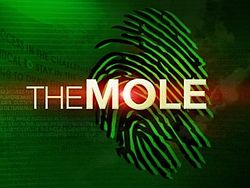 The Mole is no lie, one of the greatest reality shows ever, and when I see a show that has a similar concept, I get a bit excited.  My feelings on this particular show are a bit mixed. With reality shows much like any other genre, a bad ending can ruin the entire experience and I feel that is what happened with this show.
So, what’s the actual conceit of the show? Well, imagine Friday the 13th as a reality show. BTW, that was the plot of a Halloween sequel.

Three years after he last terrorized his sister, Michael Myers confronts her again, before traveling to Haddonfield to deal with the cast and crew of a reality show which is being broadcast from his old home.

The British reality/competition series cleverly combines the game Clue, the horror classic Friday The 13th, and Survivor, but with one major twist – – at the end of each episode someone is killed

Gotta be honest here, I doubt whoever wrote this has actually seen Survivor as this show doesn’t share many similarities with that show other than being a reality show.

So, what’s the basic structure of an episode?  The campers compete in three challenges each day, one for money to go into the pot that can be won and split amongst the campers. However, if the Killer can successfully sabotage the challenge, the Killer will get the money. Therefore unlike The Mole or Whodunnit, the Killer can walk away with the money at the end of the show. On the surface, I like this idea because I do feel like the contestant that production has set up to be the Killer should still be allowed to go for some sort of prize.

These competitions are usually pretty silly as are most of them but again that goes with the nature of the show.

The second challenge each episode os one that you would think would be more important as that is getting clues to the identity of the Killer. I’d say this but trying to determine the Killer’s identity only pops up twice throughout the show.  Going back to something like The Mole, each episode of that show ended with a quiz on the identity of The Mole but as I said this is only something that happens first halfway through the show and again at the season finale as the Campers gather around a campfire and have to guess the identity of the Killer.  If they are right, the Killer will be removed from the camp. And that does happen as the show cleverly pulls a Ghostface and reveals that there have been two Killers.

That idea is great as we actually get to see one of the Killers get killed. That actually has a bit of the horror movie vibe that this show was going for. 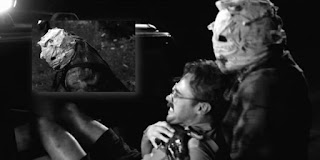 Seeing a Killer get offed is great and while you know that the Campers were most likely playing it up for the camera, there was some fun in seeing their reaction to their being a second Killer.

Oh, and while the Killers are called as such, that guy there, Bruce is the Camp’s custodial staff and he actually carries out the killings at the behest of the Killers.

Now, the last and final challenge is for immunity and that keeps the Camper that wins and one Camper of their choice safe from elimination.  Oh and elimination is another key issue I have with this show, there’s no rhyme or reason as to who gets picked to be eliminated.  You’d think it’d be something like whoever performs worse in the immunity challenge or the Campers voting on two of their own but no, it’s just random selection.

While I have issues with this randomness, I do love how the kills are presented as a campfire story being told by the host while the audience sees over-the-top dramatizations of the kills. While I don’t want to spoil all of the kills. I’d be remiss if I didn’t mention my favorite kill of the series. 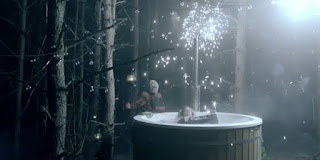 It’s so simple, camper Rosie is treated to a spa night in a hot tube in the woods and she puts on some tunes. Unbeknownst to her, Bruce shows up with a boombox and drops it into the hot tub causing Rosie to be electrocuted.  And the tub is slowly filled with the blood of the former camper.  It was actually a little shocking and the one kill from the show that has stuck with me the most since watching the show earlier this year.

That’s the other issue, The CW aired this in the summer, when this show should’ve been saved for this month as the season finale takes place on Halloween.  Kind of a missed opportunity there but eh, the entire series is on The CW’s website to watch.

On the one hand,  I liked what this show was going for and it knew what it was and never took itself too seriously. Which is nice but the actual game aspect of the show could have used some tweaking to make the show that much better.  It’s not bad but it really could’ve been better.