(Title card reads on a Black background New Year’s Eve and the clock is counting to midnight from 11:59 starting with ten counting back to one then a crowd shouts “Happy New Year” and Auld Lange Syne is heard in the Background as scene fades to James stumbling into his room after ingesting ten bottles of Martinelli’s Sparkling Non Alcoholic Apple Cider and one partly full bottle in hand with Lea Michele behind him)

TLOTA (Plastered): You know something, I’m glad Ed brought you to me and you know what else I hope Christy & Brandon have a miserable married existence for the next fifty years. (Proceeds to laugh uncontrollably drunk while Lea is looking at James as if she doesn’t want to be there) Say Lea, am I still standing.

TLOTA (Plastered): Okay that’s good (James falls down, bumps his head on the bed and floor as Lea quietly shouts for help. Title Card reads two weeks later as it appears James is coming back into his room)

TLOTA: Whew, that man is barely tolerable, I don’t know how James does it. (James looks at his watch double taps the crystal on it to reveal it’s the Rowdy Reviewer.)

Rowdy: So Lea, any changes? (Cut to Lea using a medical tri-corder trying to use it.)

Lea Michele: Nothing, according to this thing he’s still alive but he’s not comatose.

Rowdy: So what the frack are we to do? (Snaps fingers) Wait a second ORAC! (Rowdy grabs and activates the Sonic Screwdriver next to James’s closet door revealing ORAC)

Lea Michele: Is that ORAC? It’s about the size of a Microwave oven.

ORAC: According to the data obtained James should be awake in 3, 2, 1. (James groans as the two turn to see James wake up.)

Rowdy: Thank goodness you’re all right James welcome back from the great beyond. (Lea Michele smacks Rowdy in the arm and thinks and quietly apologizes saying “Sorry I forgot”)

TLOTA: I feel like I got hit by the north end of a south bound burro and got kicked in the head by the south end.

TLOTA: I appreciate the encouragement but I’ve got a few questions. First off what year is this?

Rowdy: Yeah and you are a contributor to my site rowdyc.com.

TLOTA: Well, that at least helps so the only other question I have now is, who are you guys? (Rowdy and Lea look at each other and say “Oh Boy!”)

With no memory of anything that has happened, how can James come back? The Journey starts here 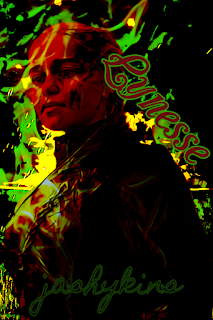