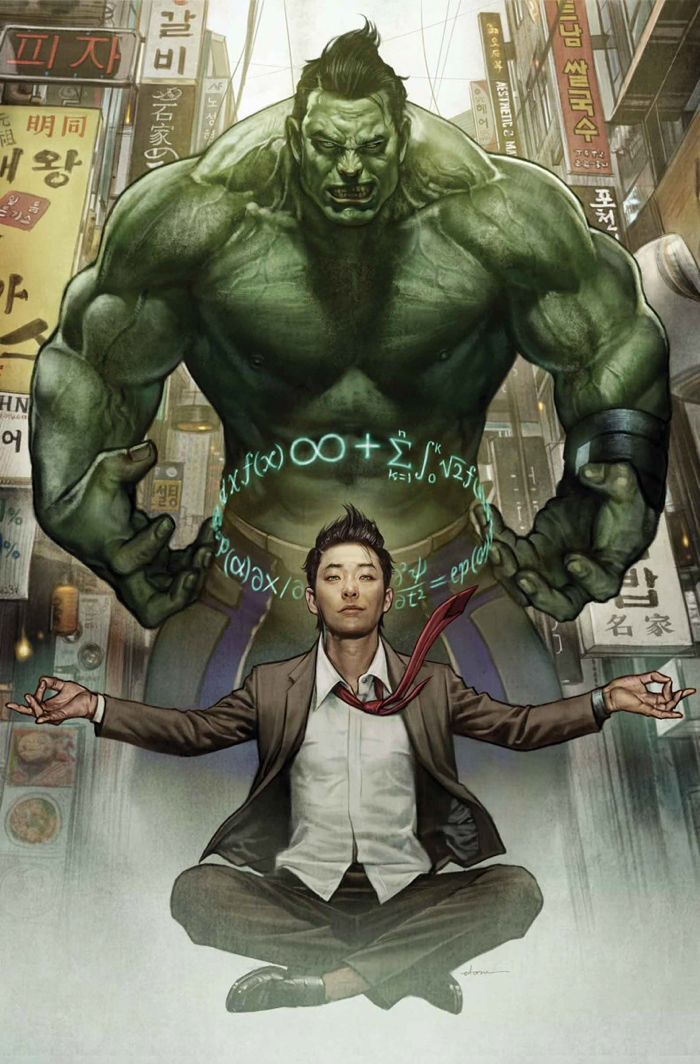 By the time I began reading New Agents of Atlas: The War of the Realms, I had already read some previous appearances of some of the agents. Exceptions included the ones who hadn’t appeared in any comics before, the ones who debuted in Asia rather than the US, and Amadeus “Brawn” Cho. While waiting for the second issue, I decided that to help critique any character development of the New Agents best known stateside, including Amadeus, I should read an older team-up story of theirs. So, in between New Agents issues three and four, I ventured for the first time into Amadeus’ 2015-17 ongoing, The Totally Awesome Hulk. Afterwards, I became more interested in comparing how it and New Agents of Atlas both explore the concept of an all-Asian-American superhero team.

Regarding crimefighters who played larger roles in this story than in New Agents of Atlas, I felt more familiar beforehand with Ms. Marvel than with SHIELD Agent Jake Oh, since I’ve already read her first series. Additionally, I didn’t read Totally Awesome Hulk earlier in order to heed advice not to support Frank Cho; I thought he drew every issue, but it turns out he only drew the first four.

Kick-ass heroes who just happen to be Asian-American…

Amadeus Cho joins a slew of other Asian-American crimefighters – including Jimmy Woo, Jake Oh, Shang-Chi the Master of Kung Fu, Kamala “Ms. Marvel” Khan, and Cindy “Silk” Moon – on an eventful night out, interrupted by an alien invasion from Seknarf Seven. Prince Regent Phalkan abducts several New Yorkers, as well as Amadeus and his new friends, when the aliens convert Herald Square into a “food colony” for their planet. Amadeus and his pals retaliate as “The Protectors,” leading the hostage New Yorkers in a war against their captors.

Upfront, this comic should make a convincing case for the importance of diversity in the media. The story constantly demonstrates the Protectors’ worth as role models, both beginning and ending with the team paying impressive visits to their youngest Asian-American fans. When the Protectors wage war against Phalkan, New Yorkers of different ages and ethnicities assist them, proving their universal appeal. Despite Amadeus Cho/Totally Awesome Hulk’s intelligence and strength, he still feels relatable with such flaws as his impulsiveness and occasional social awkwardness. The other Protectors also deliver impressive contributions to the set pieces, while their more seasoned and/or calmer personalities contrast with Amadeus during more character-driven moments.

Readers who believe that diverse and/or subversive stories shouldn’t flaunt their convention-breaking might feel annoyed to see this comic do that sometimes. In the first chapter, pretty much all of the dialogue in between the bone marrow donation drive and the alien invasion consists of the Protectors discussing which Asian stereotypes do and don’t apply to their lives. Personally, I sometimes reflect on and/or discuss the accuracy of those stereotypes, so this discussion doesn’t feel too unrealistic. As the comic progresses, it also feels more subtle about the conventions it breaks. Big Apple Showdown ultimately provides a fun and thought-provoking showcase for some of Marvel’s Asian-American superheroes.