My favorite Christmas comics from Marvel and DC

Christmas, like no other holiday, has inspired a lot of things. Stories, songs, TV specials, movies, you name it. It’s gotten to the point where all these things are (to many) an indispensable part of the holiday season.

Christmas has inspired a number of comic book specials as well. Manic Expression’s own richb wrote his own list of top 12 Christmas comics a few years back. I thought I’d do so as well. There will be at least two overlapping items, but there will be a lot of comics that didn’t make richb’s list. Especially since I’ll be including one or two Marvel items as well.

This list is in no particular order, as I’m not really ranking these.

“Twas the Fright Before Christmas”, Written and co-plotted by Len Wein and E. Nelson Bridwell

Ah, this is one of my childhood favorites. Superman meets with a young boy named Timmy Dickens (and the name is the ONLY Christmas Carol reference in this one, oddly enough). The boy has been mind-controlled into stealing from a street-corner Santa. Superman takes Timmy to his Fortress of Solitude and uses the technology there to snap him out of the mind control, and hear his story. Apparently, the boy is too old to believe in Santa, so he decided to sneak a look at what he believed were his Christmas presents. The toys, however, were actually gimmicked toys from the Toyman designed to mind-control kids into stealing money and delivering them to Schott’s Toy Store (the Toyman’s base of operations). Superman is flying Timmy back to Metropolis when another one of the Toyman’s gimmicked toys zaps him, and he is knocked out.

Superman and Timmy are rescued by Santa Claus and his elves. This confuses Superman, as he’s had his Fortress up north for years and has never even noticed Santa’s workshop before. “No one sees it unless I wish it to be seen.” Santa explains. Anyway, Superman and Santa Claus team up to defeat the Toyman and replace his gimmicked toys with harmless replicas created by Santa and his elves. Then, Superman gets knocked out again by one of the Toyman’s gimmicked toys, and wakes up to find only Timmy with him. He thinks maybe the whole thing was a dream, but Timmy now believes in Santa Claus, and at the end Superman finds a special holo-toy that only Santa Claus could have given him.

“No, Bart, there is no Santa Claus” (originally printed in DC Holiday Bash III, reprinted in the trade paperback A DC Universe Christmas in 2000). 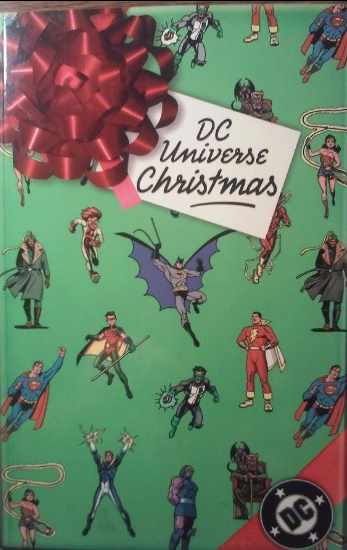 This story deals with Bart Allen, a teenage grandson of Barry Allen who was raised in the far future with the help of virtual reality. Now in the 21st century, he’s joined the Flash family as the super-speeding Impulse, under the guardianship of Max Mercury (a time traveling super-speed mentor figure who’s been an advisor to the adult speedsters in the Flash family as well). Bart’s heart is in the right place, but he tends to act first without thinking things through (hence the name Impulse). As the story opens on Christmas Eve, Bart is looking forward to receiving the year’s new videogame Blastomatic 3000 under the Christmas tree. He says that Santa’s going to bring it.

Max then points out that most kids Bart’s age have decided that Santa Claus is a myth, and an improbable one at that. But for every argument Max makes against Santa, Bart counters with an example of Santa’s abilities that are matched by a member of the Justice League. The story goes on to more fun when Bart mistakingly believes Santa’s been kidnapped and attempts to fill in while he trusts Max to find Santa, and has an ambiguous ending that hints Bart might have been right about Santa being real after all. It’s an unashamed cute and fun story.

Both of the above stories make the point that in a universe where Superman, Batman, Wonder Woman, the Flash, the Atom, and the Martian Manhunter exist, the existence of a man in a sleigh with flying reindeer who can travel the world in one day isn’t all that improbable. This story, meanwhile, has Santa’s existence non-ambiguous from the start: He turns up early on, and no one in the story doubts his existence.

Linkara reviewed this one on one of his Christmas episodes of Atop the Fourth Wall. It’s a fun guilty pleasure with basically three interconnected stories. The A story involves Clark Kent and Lois Lane feeling sorry for poor kids who can only stare in store windows, so they start up a campaign to repair old toys and distribute them to poor children on Christmas. The B story involves spoiled rich kid James Daniels dissatisfied with the toys he’s receiving, only for Superman to show him around the poor children’s neighborhoods and let him see that the poor children are glad to have even old and broken toys to play with. James sees the error of his ways and decides to help with distributing toys to the less fortunate.

And the C story is where Santa Claus plays the most important role. Two bitter old men, Dr. Grouch and Mr. Meaney, arrive at Santa’s workshop intending to get Santa Claus to stop in his free toymaking and distributing services. Being bitter over having never enjoyed Christmas as children, they decide they’re going to ruin Christmas for everyone else. When Santa Claus refuses to end his toymaking and use his factory for more profit-oriented businesses, the two pessimists demand he conform to their thinking, and are thrown out of the workshop. They then hatch numerous schemes to ruin Christmas before Superman and Santa Claus stop them, and Santa Claus decides to forgive them and give them presents. Santa’s unexpected generosity warms their hearts, and they reform. The story is silly, but in a fun way.

Okay, on to Marvel now. 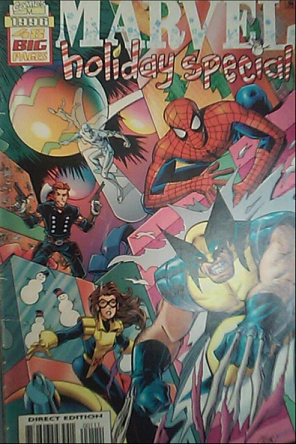 This special has a number of stories of varying tones, all of which are worth noting here.

First up is one of my personal favorites, a Spider-Man story by Mark Waid titled ‘Not a Creature Was Stirring’. We begin with Peter Parker being reluctantly dragged out to a photo op where Daily Bugle publisher (and longtime writer of anti-Spider-Man stories and editorials) J. Jonah Jameson is handing out worn out old toys (that, unlike the ones Clark and Lois were distributing, hadn’t been fixed or cleaned) to needy kids who were clearly uncomfortable by Jameson’s insincerity as well as the shoddiness of the toys. After receiving nothing for his trouble but bus fare from Jameson, Peter decides to dress up as Spider-Man and follow Jameson and play a Spider-prank on his old nemesis.

He finds Jameson entering an old warehouse filled with worn out old toys. Spying on Jameson from the skylight, Spider-Man’s internal monologue makes a few wisecracks, noting that despite the poor quality of the toys, giving is still giving, even if Jonah’s going about it in a screwy way. He doesn’t have too long to ponder this further before the roof collapses below him, and he and Jameson are trapped underneath a warehouseful of rubble. Jameson is able to grab Spider-Man’s mask, but Spider-Man used the last of his webbing to make a substitute webbing mask.

Spider-Man is in no position to get leverage to free himself, but Jameson is in a position to move the beam off of Spider-Man so he can free both of them from the rubble. Jameson, however, refuses, stating that Spider-Man being trapped is the greatest Christmas present he’s ever received. Jameson knows that Spider-Man’s webbing dissolves in an hour, and all he has to do is wait and he’ll know Spider-Man’s true identity. It’s not until forty minutes later, with the snow falling and both of them freezing, that Spider-Man is able to talk Jameson into lifting the beam, stating that he’ll never tell another soul that Jameson helped him. It’s then that a news helicopter spots and films Jameson in the act of saving his arch-nemesis, much to Jameson’s embarrasment.

The other stories in this special are worth noting, too, but in order to keep this article from going too long, I’ll need a whole seperate blog post to cover them all.

Written by Mark Waid and published in 2001, this is a fun story. Plastic Man is babysitting Weezer, the nephew of his sidekick Woozy Winks, while Woozy and his sister are downstairs putting together the bike they got for Weezer. Plastic Man tells Weezer to go to sleep because Santa Claus only delivers to kids who go to bed. Weezer says that Santa’s made up. “Made-up guys can’t be cool. The JLA is cool. Batman is in it. So’s Green Lantern.”

Plastic Man adds “And so is Santa!” To which Weezer replies “Since when?” And Plastic Man says “I have no idea.” What happens then is Plastic Man telling a story of how Santa Claus joined the Justice League of America. It’s clear he’s making it up as he goes along, as he struggles to come up with an antagonist. He settles on the demon Neron, who is creating naughtiness throughout the world by giving gifts for which people have to do bad things in return for. What happens next is the Justice League getting captured and Santa showing an unexpected super-power to save the day … at least according to Plastic Man. Weezer nitpicks the story, pointing out all the flaws, but then something else happens to make Weezer believe in Santa Claus. I won’t spoil it for you here, but all in all this story succeeds not only as a fun Christmas superhero story but as a meta-commentary on storytelling and fans and so on. I highly recommend it.

Well, there’s actually more I could say about these and other Christmas comics, but I really want to get this blog out on Christmas eve. Maybe I’ll write more some other time.

Anyway, feel free to leave your comments. And whether it’s white or green or whatever, I wish you a happy holiday season indeed.

When originally posted, this blog received the following replies:

Happy holidays to you, Chris Lang. This was a great read here on some choice seasonal comic reads here. Awesome for the call out for Marvel Holiday Special 1996. Thumbs up.
Log in to Reply
chris-lang
chris-lang says:
December 25, 2017 at 1:31 am

Thanks. Marvel Holiday Special 1996 is one of my favorites. There’s some other stories definitely worth mentioning in it. The others are more on the serious side than the Spider-Man story, but still worth it. There’s Kitty Pryde going home to celebrate Hannukah with her family, only to help a little girl retrieve something of sentimental value from the ruins of a burned church. There’s the Rawhide Kid encountering an unusual situation during the Christmas season. There’s the Silver Surfer attempting to find out more about the Star of Bethlehem. And there’s Wolverine’s cynical rant about the holiday season, while the people around him still have it in them to get into the Christmas spirit and do nice things for their fellow human beings.

I’d love to do a blog about it, but sadly it might have to wait until next year. Thanks, and happy holidays to you, too.
Log in to Reply
moviefan
moviefan says:
December 24, 2017 at 4:40 pm

I enjoyed reading this as these sound like some neat stories. The only holiday comics besides the Kid Flash one that I’ve read usually involve ponies or Ghostbusters.
Log in to Reply
chris-lang
chris-lang says:
December 25, 2017 at 1:32 am

Well, they’re favorites of mine. I dig them out and re-read them every year. They’re every bit a part of my holiday tradition as Rankin/Bass, A Christmas Carol, It’s a Wonderful Life, Elf, and A Christmas Story.
Log in to Reply