Well, it’s time for another summer which for many people means one thing: Going to the Beach.

Being from Southern California, this was basically the easiest and most frequent thing to solve the summertime blues. While I don’t go as often now, and by that I mean almost not at all, it did help serve as inspiration for a new themed month here on Manic. So join me as I partake in The Month of Tan Lines.

Throughout the course of July, I’ll be taking a look at various Beach Party movies throughout the 1960’s. Most of which have often been released through American International Pictures. Today, I’m here to look at one of their films, the third out of seven they’ve produced, to start off the month with their film Bikini Beach. 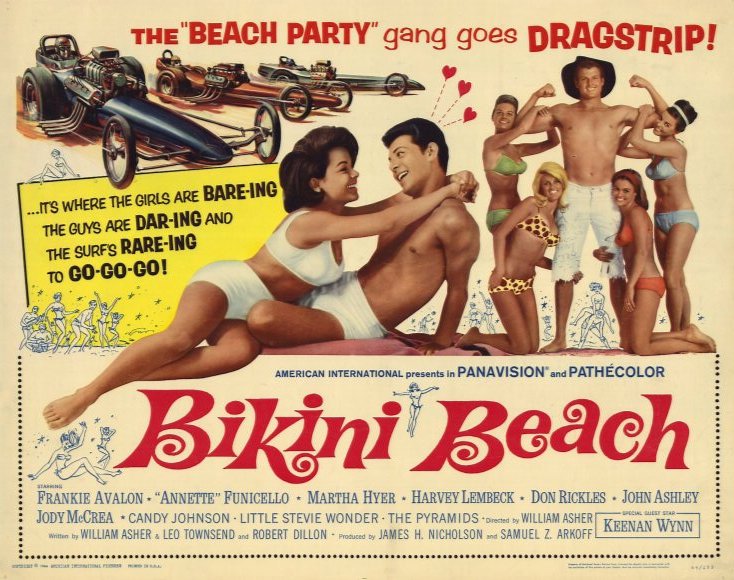 A bunch of teenagers head on out to the beach for the summer after school gets out. While there, they encounter a man by the name of Harvey Huntington Honeywagon III who believes that all of the current youth are nothing more that sex driving animals and plans on destroying the beach, somehow, and plans to build a senior citizen living center.

There’s also a side plot where a famous musician, The Potato Bug, who takes residence on the beach and plans on marrying one of the girls in the group. Her boyfriend, played by the same actor as Potato Bug, isn’t happy about this and decides to challenge him to a drag race to win her over.

The main plot is just the basic “Save the local hangout from an evil business man” that is something you’d see out of any of the Breakin’ movies. Plus the side plot is something you’d see in a road race film from the ’50s and neither plot held up in he originality department in the end. Although, to be fair, I don’t except much originality with these films. So, I guess it held up to my expectations in that regard.

Most of the character didn’t have much to them. The two main characters, Frank and Dee-Dee, are the only two memorable characters, mainly because they appear in other movies, but they don’t have much to them other than being together. The Potato Bug was a stereotypical British explorer who could play the guitar and just acted like a snob throughout thee film. Harvey was also a snob who was a bit the same like Potato Bug except he had a pet Chimp, who was obviously a guy in a suit, and was rich.The other teenagers aren’t much to talk about

Like most of AIP’s beach films, the movie is also a musical. Most of the songs are in a similar style to the Beach Boys sound-wise and have rather generic lyrics about having fun at the beach. Not of them are really noteworthy and could be cut from the film and it would have been a slight improvement. Which is a bit unfortunateÂ since Stevie Wonder pops up in the film for a little bit. (His song was probably the best one out of the bunch.)

Final Thoughts: This was a boring movie. Since it was mostly predictable, it wasn’t much of a unique movie, but it wasn’t necessarily bad in any sense. It was just a bland movie with very little originality thrown in the mix. You could watch it if you want to, but I don’t think it would bring much entertainment.