Back in the early 1950’s, Disney decided to take a step out of their normal animated territory and decided to make some live action movies. While spawning out multiple classics throughout the ’50s and ’60s (Mary Poppins, Old Yeller, 20,000 Leagues, etc.), it soon became a normal habit for them as they slowly only made very few animated films in those decades up until the ’80s. They still do release many live action films, but most of them aren’t as memorable as their animated counterparts.

With that being said, I felt like taking a look at one recently since they have plenty of them to watch. (Probably almost three times as many as they have animated films.) There have been a few that I’ve considered reviewing in the past (The Black Hole, Tron, The Watcher in the Woods), but I decided to go with one that was recommended to me by Jarvisrama99, and it’s also one I’ve never seen before, which was Escape To Witch Mountain. 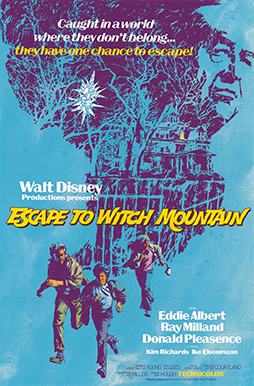 The film follows a a pair of Twin Siblings, Tony and Tia Malone, who both posess mysterious powers, are soon being chased by Aristotle Bolt, a millionaire obsessed with the paranormal who decides to find the two of them after hearing of the duo’s powers as they head to the mysterious Witch Mountain, with the help of a widower (Eddie Albert) who is traveling the country.

The film, like most Disney films, was based on a novel of the same name by Alexander Kay. The film does have minor changes in plot elements, mainly with location and certain events,but the majority of is still faithful to the source material. So it holds up in that regard since many Disney films are very loose adaptations of their source material.

Tony and Tia seemed a little bit of a bore to me. 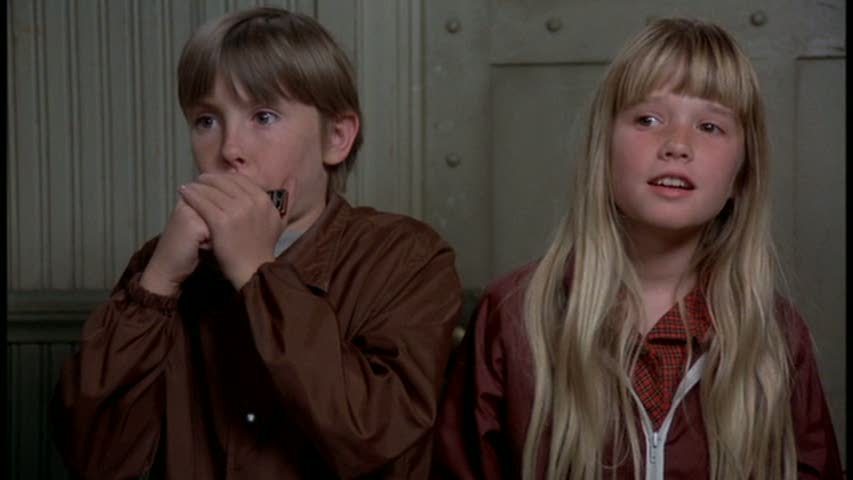 Aside from the fact that they have a past that is shrouded in mystery and that they have powers, they really weren’t very interesting to me. Although, they do get their memories back in the film, but I’m going to avoid spoilers and say it does explain their powers. Never the less, they were still a bore to me. (Although, to be fair, they put more effort in their acting than most current child actors.)

While I didn’t care much for the twins, I did get some enjoyment out of the villains in the film. The main villain, Mr. Bolt, was played by Ray Millain and he was very much like a cross between Ritchie Rich and Dale Gribble from King of the Hill, investing every dollar he has in his obsession with the Paranormal. (I bet he loves the Paranormal Activity series.)Â His lackey, Lucas, was Donald Pleasance who pretty much acts like most of his other characters: pretty good with a slight over the top touch at times. The two of them were where a lot of the entertainment came from for me.

With our main characters given mystical powers, special effects were obviously going to be a major factor for the movie.

With it being in the mid ’70s, it still made use of models and some of the use of strings and harnesses, which would later be perfected in a couple years with Star Wars and Close Encounters. While some parts of the film are subtle of their use, most of it is very obvious and is easy to point out. Thankfully, effects got better over time thanks to Digital Technology.

Final Thoughts: I thought it was an okay movie. It had its moments for me, but not really enough to really enjoy it. I will admit though, it was one of the better live action Disney films from what I’ve seen so far. So, if your curious, I’d probably recommend it. It’s certainly a lot better than the version with The Rock.