Book Review: We Don’t Need Roads: The Making of the Back to the Future Trilogy

Back to the FutureÂ has become one of the most iconic and memorable movies of the 1980’s and has led up to one of the most well regarded trilogies in cinema history alongside the Star Wars trilogy, The Lord of the Rings trilogy, and The Dark Knight trilogy. This July will mark the first movie’s 30th anniversary and a new book has been released to give you behind the scenes look into the films in the form of We Don’t Need Roads: The Making of the Back to the Future Trilogy by Caseen Gaines. We at Old School Lane have interviewed Caseen before. Click here to read our first interview. Click here to watch episode 31 of Casual Chats to listen to our second interview. 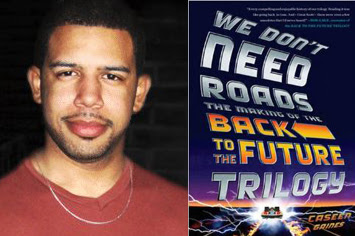 This marks his third book he’s written behind Inside Pee-wee’s PlayhouseÂ and A Christmas Story: Behind the Scenes of a Holiday Classic, but the first one published by Penguin Publishing Company, the same company that published Slimed! An Oral History of Nickelodeon’s Golden Age by Mathew Klickstein. But no need to fret, for Gaines’ narrative of weaving in over 500 hours of interviews with multiple people from the movies such as Bob Zemekis, Bob Gale, Lea Thompson, Christopher Lloyd, and many more hasn’t been lost. It’s just as intriguing and captivating as ever with each chapter telling a story ranging from the struggles of Bob Zemekis and Bob Gale getting started in their careers, the struggle of trying to make Eric Stolz work as Marty McFly before being replaced by Michael J. Fox, never before heard stories about the makings of the movies, and what happened afterwards. It even takes some time to discuss about the Back to the Future Ride at Universal Studios (which is still open in Japan. Lucky) and the more recent game made by TellTale Games.

Now unlike Inside Pee-wee’s Playhouse, in which there was no book or information about the TV series outside of the behind the scenes features on the DVDs or A Christmas Story: Behind the Scenes of a Holiday Classic in which it had the behind the scenes features on the DVD as well as a TV Guide special, the Christmas Story museum. and a few documentaries, Back to the Future is very well documented with not only a ton of behind the scenes features on the DVDs and Blu-Ray releases, but there has also been a book about Back to the Future already. It may be a little bit hard to persuade the hardest of hardcore Back to the Future fans to check the new book out, but We Don’t Need Roads has enough of new stories that seasoned veterans of the trilogy will learn about as well as a great start for people just getting into the trilogy for the first time and want to dive more into the lore of one of the greatest movies of all time. If you’re interested in purchasing the book, you can purchase it at any retail book stores, online in Amazon, an eBook on Kindle, or as an audio book at Audible. I highly recommend that you check it out, especially if you’re a movie buff or an 80’s pop culture enthusiast.

That’s all for now. Tune in next time as the next episode of Casual Chats will be about theÂ Back to the Future franchise in honor of its 30th anniversary. Hope to see you around Old School Lane soon. Thanks for reading.