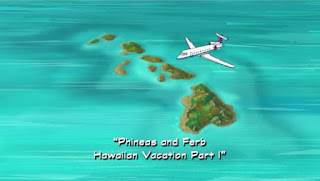 Hello & welcome back to A Look at Disney. And today, we continue our Summer Blowout as The Flynn-Fltetcher family heads to Hawaii. Â  With that out of the way, let’s begin.

Â
Â
Â This is actually a two parter. in one and it was mainly set in Hawaii to celebrate their 100th episode. Â And seeing Â as is the case, I’ll be breaking this down into Pt. I & Pt. II. Â  With that out of the way, let’s begin.
Â
Pt. I
Â
Â
Â
The family arrives in Hawaii and they’re all looking forward to different things. Â  Lawrence and Linda are looking forward to a surfing contest, Â  Candace plans on taking a break from busting the boys. Â And we find out later that the main reason that the family headed to Hawaii is because of Â  Doof. Â  Yep, Perry has some business with him there. 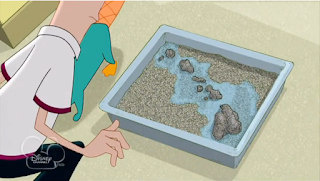 Observe, how Perry convinced his family to take a trip Â to Hawaii. Â And meanwhile at the hotel’s gift shop, Â Candace buys some pineapple serenity lotion and the boys get Â a Â box Â Aquatic Primates. Â And this is where the plot really gets Â into Â motion. Â Meanwhile, Â Perry flies off Â to the island, Â where Doof is staying. Â Pink Unicorn Island. Â Skull Island was already booked up. 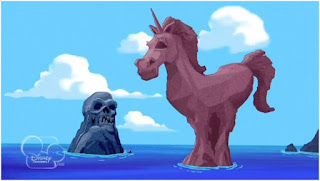 And while there, Doof explains his plan to use his Â De-Evolution-Inotar on the Tristate Area but had to come to Hawaii to get the ooze from a volcano to make it work. Â Meanwhile at the pool, Candace is relaxing, while the boys are Â watching their A Primes are coming to life, they are still too small and that they can only do one trick. Â  So, they decide to take them to the pool to see if they can make them bigger. Â And it works as they do get bigger and we get some sequences with them.

And this is where things really pick up as The A Primes run a muck of Â the hotel and hotel manager takes the role that is normally Candace’s as he tries to catch the boys. Â And the chase is just a blast Â to watch. 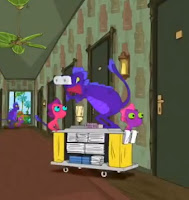 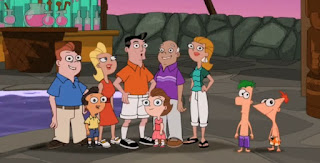 All in all, I loved Pt. 1 of Hawaiian Vacation.
Pt. II
Â
Â
Pt. II can be summed up Â with one sentence. Candace believes that she is cursed with bad luck after finding a tiki necklace. Â And meanwhile underwater, Single- Cell Doof Â is wondering who knew that his device would backfire on him. Â  And meanwhile the boys are going to try some aquatic adventures.

And well, Doof is turned back into a human and Â his subplot becomes a parody of Cast Away. Â  And as for Candace, Â there isn’t much more to say then that she thinks that she has bad luck and it is coming from the tiki and it has to throw it into a volcano and destroy it but Â it turns out that it’s a beeper for a restaurant. Â  There isn’t anything else to say on Pt. II without giving too much away. Â  It’s fun.
Characters
Â
Â
Main Characters
Â
Â
Phineas & Ferb voiced by Â Vincent Martella & Â Thomas Sangster 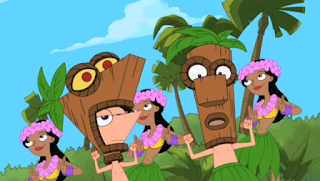 The boys were still the same enjoyable boys that they’ve always been. Just in a different location and they truly shined in Pt. I of the special
Candace voiced by Ashley Tisdale 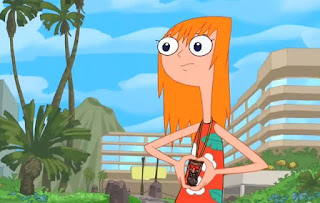 It’s interesting but going through and re-watching these episodes has made Candace much more likable to me. Â And Pt. II of Hawaiian Vacation is a great example of how likable Candace can be. Â  Her suffering is done in a way that when she gets hurt, you feel bad for her but at the same time, never feel bad fro laughing at her because of how over-the-top, it all is.
Supporting Characters
Perry/Agent P Â voiced by Dee Bradley Baker 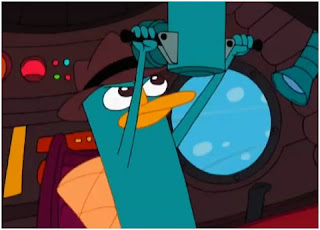 This isn’t much to say about Perry other than he continues being awesome in this special and his spats with Doof are a blast.
Songs
Â
Â
Prime Calypso
This song is just a lot of fun and shows off the A Primes in a fun manner. Â It’s just so catchy. Â  And one I can listen to again and again. Â There really isn’t much more to say about this song than that.
Bad Luck
While this song is a bit shorter, Â I find it a bit catchier. Â Just something about the tune and this is a prime example of what I mean about being able to laugh at Candace’s bad luck.
Villain
Â

Doof Â is at his fullest of being really funny here. Â  Again, just like the boys, Â new location but same old Doof and Â that worked so well. And you’ll see that as a recurring theme through Summer Blowout. Â And this episode once again highlights how funny, his interactions with Perry are.
Â
My Final Thoughts
Â
This episode is a lot of fun and one that I’m happy that I went back and watched. Â It feels like a regular episode of the series, just with the location changed. Â And that worked. Â  Join me next time as we look at Summer Belongs To You.