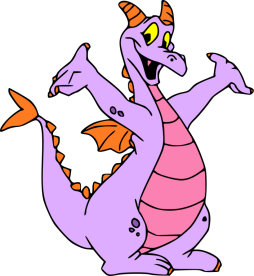 Hello & welcome back to A Look at Disney. Â And man, is this a good week to be a fan of Figment. Â  First off, Â Disney Kingdom announced that their Figment miniseries will be getting a sequel.Â Â  Simply titled Figment 2. 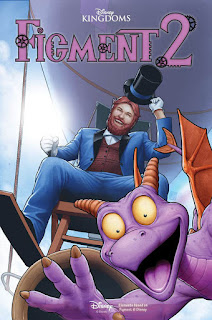 This has me so excited as I loved the first miniseries and if that isn’t enough, it’s been confirmed Â that Figment will have a cameo in Inside Out in all of places, Riley’s Imagination Island/Land. Which makes so much sense considering where he comes from. So, this has me wondering. Â Can Figment make a Comeback?
This is an odd question to ask as he’s never really gone away as you can still find him at EPCOT but the current Figment is not the same as the Figment that was around, when Journey Into Imagination was at it’s height of popularity. Â  Â And Â this in Â part in my opinion Â is because Â of the relationship that Figment has with Dreamfinder. Â If you even just Â listen to One Little Spark, Â you can hear the infectious Â joy that these two characters bring to one another.Â  Â  And this in part comes from Dreamfinder’s personality,which during my Disney World event, I described as.

Dreamfinder reminds me of Santa Claus. Let’s take a look at the words that the Disney Wiki uses to sum up, Dreamfinder’s personality.

Jovial, he is so happy that it is infectious, he can put a smile on your face. Creative, yeah, I can see that, he’s talks about the importance of imagination. Uncle Walt, hmm would’ve never thought of that one but the more I look at it, it makes sense in a way. Uncle Walt was the happy caring TV persona of Walt that loved showing off stuff and educating. I was originally going to say grandfatherly to describe Dreamfinder but Uncle Walt is a more apt description.

And the first Â Figment miniseries played off this and showed him as a well meaning young scientist in the early 1900’s named Blair, who had ideas that the people above him didn’t understand. And Â in this story, we see his first device and how he created Figment out of his dreams and how he became the Dreamfinder that so many Disney World fans, myself included love. Â  And Â it was Â so clear Â from reading interviews with Jim Zub, the man behind the Figment miniseries that he too was a fan of Journey Into Imagination. Â  And you can already tell that he’s excited forFigment 2.Â  Â And more importantly that he understood the relationship between these characters and made it feel as though, they leaped Â from the ride into a comic book. Even though, the comic is a prequel to the ride. He took the friendship that is displayed in both One Little Spark and the rest of the ride and expanded upon it and made these already lovable characters, even more lovable.

Something else of interest to point out is that is in his book, From Dreamer To Dreamfinder, the original Â Dreamfinder, RonÂ Schneider points out the popularity of Figment and that while he was working at EPCOT, Figment merchandise would outsell Mickey Mouse merchandise. 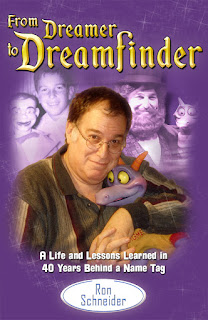 So, that should tell you of the love that kids had for this character. Â And with stuff like the comic miniseries and it’s sequel and now a cameo in Inside Out, those kids are now grown up and get to share their love of Figment for a whole new generation. So, I guess in a way Figment has made his comeback and does make me happy but I still think that there is more that could be done with my favorite Disney dragon. In an article from last year, I proposed that one idea to bring Figment back is an animated children’s show to air on Disney Junior.Â Â  Â Now Â this isn’t Â too much of a new idea of Disney did make educational shorts about the magic of reading starring Figment back in the late ’80s and would pair him up with a popular Disney characters such as Peter Pan.

Alas, this clip is the only thing that I could find of those shorts and well, Â it was odd. Â And for those of you that didn’t read my first article. Â My idea was to have the series start out with a live action Dreamfinder telling kids of his and Figment’s adventures through various dimensions and realms and how the power of imagination helped him and Figment get out of a troublesome situation. Â And the story would be the animated portion. Â Now interestingly, Â  my Â idea was not the first time that a Dreamfinder/Figment TV show was proposed. Â  As this article fromMousePlanet will go over, there were a few ideas such as this one.

When the Disney Channel thought about originating programming from the Disney theme parks, Ron Schneider tried to get the Disney Company interested in another Dreamfinder television series involving storytelling, but once it went to committee, the simple concept suddenly became overblown and unworkable.

Which is understandable but a tad unfortunate. However, I do think that we are now in a day and age, where a TV show starring Figment & Dreamfinder could be more feasible, then it was when Disney Channel first started.

At the end of the day, Â to the answer the opening question. Â  Yes, Figment cam make a comeback as we’ve seen with the comic miniseries and perhaps I am just a fan that is asking for more than I’ll ever get but I do think that there is still so much more that can be done with Figment. What are your thoughts? Let me know in the comments. Peace!