A Look at Disney Music Fridays # 157: Friend Like Me 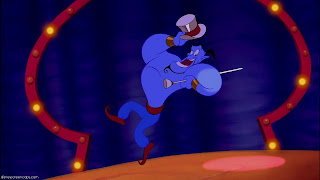 Hello & welcome back to A Look at Disney. Â Lately, I’ve been thinking about Robin Williams between Jamietud’s video on Mrs. Doubtfire, seeing his name mentioned during the “In Memoriam” on the Tony’s. Â I’ve been listening to his stand-up a bit more on Pandora lately and have gone back watched clips from his appearances on Whose Line Is It Anyway. Â That’s why I’ve wanted to do this Music Fridays for a while but I didn’t know if it would be right or not to do it. Â I want to look at Friend Like Me and some other versions of the song. Â Nothing can top the Robin Williams classic but there are some good ones out there. Â Let’s begin.
Friend Like Me – Robin Williams
This is easily, one of the best songs in Aladdin. Â Williams totally sells Â  it here as the Genie and just takes you on wild roller coaster ride of fun with this song. Â It’s just so much fun and you can’t help but smile, whenever you listen to this song. Â This song totally sums up how wild and fun, Genie is as a character and that’s why he is one of the most beloved Disney characters.
Friend Like Me Â – Aladdin: A Musical Spectacular
Now, Â I looked at this version from Disney California Adventure’s stage show during Aladdin Week. And while I liked it at the time, I still like it but not as much because I feel like in the beginning, this actor is trying too hard to be like Robin Williams and not putting his own spin on it. Â It’s not bad but I don’t feel like there’s enough there to differentiate it from the movie version.
Friend Like Me – Broadway
Gotta be honest, Â this one gives the movie version a close run for being my favorite version of this song. Â This version does differentiate itself from Williams’ Â classic and James Monoroe Iglehart totally makes for a fun Genie from everything I’ve heard on the OBC and brings a fun new take to the character. Â And it’s clear that he has respect for the character, while still bringing something new to it. This version is a bit longer but I don’t care, it’s a lot of fun. Â And they get me in two areas, first with the Dancing with The Stars reference and the other one should be pretty obvious. Â I Â absolutely adore the Disney medley here. Â It’s fun and funny and almost makes me wish to that James Mnoroe Iglehart would release a Disney covers CD. Â  If Â you want to hear him do more great Disney covers, check out the Genie Medley.
Friend Like Me – Â Matt Â Mulholland
And we close out with this pretty fun acapella cover. Â I just stumbled upon it and what can I say, Â it just puts a smile on my face. Like any version of this song. Â It’s just a lot of fun and reminds me of how much I love this song. Â This is a great cover and I’ll probably check out from Mr. Mullholland in the future.
I hope that you guys have enjoyed this Music Fridays. This is one that I’ve been wanting to do for a while but I didn’t know how to properly approach the subject. Â I know we shouldn’t pigeonhole actors to one role but whenever I think of Robin Williams, I think of Genie. As Genie is my favorite Robin Williams character and when he passed away, it felt like The Genie passed away too. Â  I know that sounds silly but listening to these covers help me to know that Robin William’s legacy as The Genie will live on and we will have new actors come such as James Monroe Iglehart and give their take on this iconic character. BTW, check out this awesome tribute to Robin Williams that the cast of Aladdin on Broadway did, when he passed awayÂ  Â  Stuff Â like this shows me that the love and warmth that I associate with Genie have not been lost. Â  But there are still days that I have to remind myself that Robin Williams is gone and that isn’t easy. Â But listening to this song does at Â make it a little easier. Â  As Jamietud said in his video, I’d rather remember Robin Williams for the joy and laughter that he brought the world. Â And if this song can help me do that, well that’s one small step. Â  Peace!