It Came From the Drive In: When Dinosaurs Ruled the Earth Dinosaurs have always one of the biggest benefactors in the world of fiction.With works ranging all the way back to the 1920’s with movies like The Lost World and the works of Edgar Rice Borroughs to modern works like Jurassic Park, They have often dominated the fictitious world in their own ways like they did so very long ago and with Jurassic World soon to come to the big screen, they’ll live in the creative and scientific minds throughout the ages. So with Jurassic World, I’ve gotten in the mood to watch an old stop-motion Dinosaur film that were often done by Ray Harryhausen or Willis O’ Brien and I found an old Hammer Horror Dinosaur movie from 1970 perfect for the occasion entitled When Dinosaurs Ruled The Earth. The film follows a small tribe of cavemen as one member, named Sanna, recently escapes being a human sacrifice and joins up with another member named Tara and she goes off to live with her tribe. While mostly thinking she’s safe, they are attacked by Dinosaurs from that point onward and it soon becomes a race for survival against them as they start to devour them one by one.
While the plot of the film at first sounds a little bit interesting, it doesn’t really pick up at all in the film. The basic plot of the film is just a standard survive the elements film with Dinosaurs thrown in. It often tries to add in some other elements to help make the film more interesting, but it doesn’t work very much and is left as just sub-par.
Much like all of the Dinosaur movies of old, the dinosaurs are animated using stop motion clay figures. 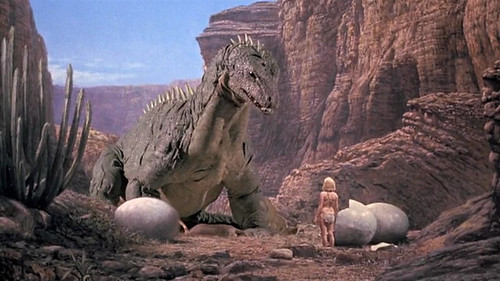 The effects were done by Jim Danforth, who later worked with Harryhausen on Clash of the Titans, and his work is definitely the best part of the whole film. So much so that the movie earned him an Oscar Nomination for Special Effects. Â The interactions with the dinosaurs were similar to some of Harryhausen earlier works, which could work since the film is a spiritual sequel to one of his films One Million Years B.C., except most of the time the actors are reacting to them in cut away shots. So it definitely lacks in how they interactive with each other, but at least the dinosaurs are still cool to look at.
Speaking of somethingÂ to look at, the film has heavy use of cave women nudity. The film uses it constantly and it oddly got old rather quickly. It’s kind of like reading an issue of Heavy Metal but not as much exposure….and yet the film somehow got a “G” Rating. Most, if not all, of the her female characters were basically put in the film purely for this reason only.
Aside from the cave women who are just there for eye-candy, the characters in the film aren’t very interesting and have very little depth or personality to them. The majority of the characters just give out dialogue or exposition that doesn’t add up to much since they’ll just be attacked and killed by dinosaurs a couple of scenes later.
At leastÂ our main character Sanna has some interesting qualities to her. Throughout the film, she learns how to train several dinosaurs after making them believe that she is their sibling. As odd as that my sound, it does at least give her something to do for part of the film as well as some minor traits to her. Although, it doesn’t help very much.
The only other character that is “important” is the male lead. Tara. He is basically a dull side character who is there at times to try and rescue Sanna when dinosaurs attack. Aside from that, he tries to help the other humans survive in the pre-historic world. He’s pretty much just an average hero stereotype.
Final Thoughts: It was a dull film. Aside from the Special Effects of the dinosaurs, this was lacking in every important aspect that a film requires. It didn’t hold much of my interest and I wouldn’t be surprised that this was forgotten over time. Hopefully, Jurassic World will prove to be a more enjoyable experience.